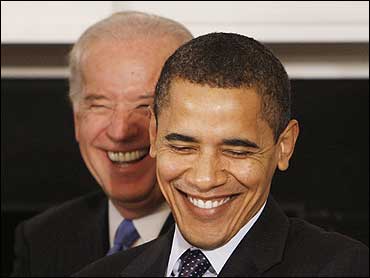 President Barack Obama said Monday he would begin distributing $15 billion to the states within two days to help them with Medicaid payments to the poor.

The money will begin reaching the states Wednesday from the newly passed $787 billion economic stimulus program, Mr. Obama told the nation's governors during a meeting at the White House.

The recession has had a huge impact on state budgets, and one area public officials are struggling with is in meeting costs in the Medicaid program for the poor. The program is underwritten jointly by states and the federal government.

Speaking to state chief executives at the close of the three-day winter session of the National Governors Association, Mr. Obama also addressed concerns about the stimulus plan raised by a handful of Republican governors who have called the plan overly large and wasteful .

At issue is a proposed expansion of state unemployment benefits for part-time workers and others who where previously ineligible to receive the funding. Some GOP governors - several with an eye on the 2012 presidential contest including Mark Sanford of South Carolina and Bobby Jindal of Louisiana - say they may not accept that funding because it will require a tax increase on employers once the stimulus money runs out.

Mr. Obama addressed that critique directly, and warned against allowing political considerations to cloud a discussion of the stimulus program.

He added, "If we agree on 90 percent of this stuff, and we're spending all our time on television arguing about 1, 2, 3 percent of the spending in this thing, and somehow it's being characterized in broad brush as wasteful spending, that starts sounding more like politics. And that's what right now we don't have time to do."

Mr. Obama also stressed the need for accountability and transparency in how the governors spend the stimulus funds.

He named Earl Devaney, a former Secret Service agent who helped expose lobbyists' corruption at the Interior Department, to head the new Recovery Act Transparency and Accountability Board. Vice President Joe Biden also will be given a role coordinating oversight of stimulus spending, Obama said.

Mr. Obama created the board as an at-large body to oversee how the government spends the $787 billion stimulus package.

The president also was expected to begin showing his budget hand at a White House summit on fiscal policy before he travels to the U.S. Capitol Tuesday for his first address to Congress. Those invited to Monday's summit include independent experts, representatives of unions and advocacy groups, and members of Congress.

Federal regulators, meanwhile, pledged they will launch a revamped program to inject fresh capital into financial institutions starting Wednesday. Several regulatory agencies issued the statement Monday amid growing concern that some of the biggest U.S. banks may need additional assistance to survive the fallout from the worst financial crisis since the 1930s.

The statement did not name any specific banks or respond to reports that the government was considering increasing its ownership of Citigroup Inc. The White House just last week downplayed persistent speculation that some banks could be effectively nationalized by the federal government.