While Americans support the notion the government providing financial help to struggling homeowners, many are resentful of beneficiaries they deem "irresponsible," a new CBS News/New York Times poll finds.

As President Obama pushes a $75 billion mortgage relief plan, sixty-one percent of those surveyed say the government should help homeowners, while just 20 percent oppose such help.

But while 35 percent say Mr. Obama's plan makes them feel relieved for people facing foreclosure, just as many are resent the beneficiaries of the program for needing to be rescued following what respondents see as irresponsible behavior.

Support for government aide to banks and financial institutions, meanwhile, continues to fall. Fifty percent of those surveyed now say they disapprove of the government giving money to those entities, while 39 percent approve. In December, more Americans approved (46 percent) than disapproved (44 percent).

Part of the reason for the lack of support is that the majority of Americans - 57 percent - have little to no confidence that giving money to such institutions will help the entire economy.

Fifty-nine percent say President Obama's proposal to help banks would only help bankers, not all Americans.

There is widespread support for the president and Congress' efforts to cap executive pay: Eighty-three percent say the government should limit executive salaries if companies get federal money. Just 11 percent say it should not.

Americans are even less supportive of a further bailout for the U.S. auto industry. (Automakers have already received loans from the government but say they may need more money to avoid bankruptcy.) Just 22 percent say the government should give more money to automakers, while 68 percent oppose any further aid.

One month into his term, President Obama's overall approval rating remains favorable, with 63 percent of Americans approving of the job he is doing as president. The figure is similar to the approval rating he received earlier this month.

Seventy-six percent of Americans are confident in Mr. Obama's ability to make the right decisions about the economy, including nearly a third who are very confident. 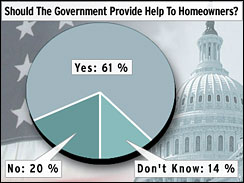 (CBS)
More than half of Americans also approve of President Obama's handling of foreign policy (57 percent) and Iraq (54 percent).

And 77 percent are optimistic about the next four years with Mr. Obama as president, including 57 percent of Republicans.

While the percentage of Americans who believe the president is trying for bipartisanship has slipped seven points from earlier this month, 74 percent still think he is trying to be bipartisan.

Most of those surveyed say Republican opposition to the stimulus bill - it passed with the support of no House Republicans and just three Senate Democrats - results from politics. Sixty-three percent say GOP opposition was for political reasons, while 29 percent say it was because the stimulus bill would be bad for the economy.
Americans say Mr. Obama should focus more on his positions than reaching across the aisle. Fifty-six percent say he should prioritize sticking to his policies, while just 39 percent say he should put bipartisanship first. Seventy-nine percent, however, say Congressional Republicans should prioritize bipartisanship.

And Americans do not expect the economic recession to end anytime soon. Nearly two in three Americans think the recession will last two years or more.

Forty percent of those surveyed say jobs and unemployment are the most important economic problem facing the country. Ten percent cite housing, while seven percent cite the failure of financial institutions.

Sixty-four percent of Americans say they are at least somewhat concerned that they or someone in their household might be out of work and looking for a job in the next twelve months. Almost four in 10 are very concerned.

Roughly one in three Americans say their financial situation is fairly or very bad, up 11 percentage points from a year ago. Fifty-five percent say they make just enough to pay their bills, while 17 percent say they do not make enough to make ends meet.

(CBS)
A slim majority (53 percent) of Americans are optimistic that the $787 billion economic stimulus bill President Obama signed last week will have a positive impact on the economy. Twenty-four percent believe it will have no impact, and 13 percent say it will make things worse.

Those who do have an opinion are divided about the job creation and government spending included in the bill. More think the bill includes too few tax cuts than has too many.

There is more consensus around the idea that the stimulus bill is too small. Sixty-nine percent say more money will be needed to stimulate the economy in the months ahead; just 18 percent think the bill is large enough.

This poll was conducted among a random sample of 1,112 adults nationwide, interviewed by telephone February 18-22 2009. Phone numbers were dialed from RDD samples of both standard land-lines and cell phones. The error due to sampling for results based on the entire sample could be plus or minus three percentage points. The error for subgroups is higher.