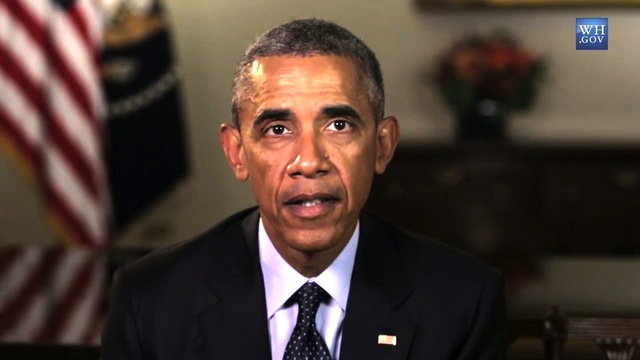 As Congress debates a spending bill that would strip away federal money from Planned Parenthood and could trigger a government shutdown, President Obama is weighing in on the funding battle.

"If Republicans want to help, they can choose, right now, to pass a budget that helps us grow our economy even faster, create jobs even faster, lift people's incomes and prospects even faster," Mr. Obama said in a video released Saturday. "But they've only got until the end of the month to do it - or they'll shut down our government for the second time in two years."

The president urged discussion on a spending bill but said that the real issues to focus on included education, job training and infrastructure problems -- not, he said, "unrelated ideological issues like Planned Parenthood."

"We need to set our sights higher than that," Mr. Obama added.

The House voted Friday to block funds for the women's health organization for one year, but it's a bill that doesn't have many legs to stand on in the Senate.

Highlighting a Republican divide on the issue, Sen. Kelly Ayotte, R-New Hampshire, expressed skepticism for the chances of defunding Planned Parenthood on Thursday.

"How do we get 60 votes?" Ayotte asked presidential candidate and Texas Sen. Ted Cruz in a letter. "And if for some reason there were 60 votes, how do we get 67 votes in the Senate to overcome a presidential veto?"

And as for tying a measure defunding Planned Parenthood to the spending bill, the Republicans' No. 2 in the Senate, John Cornyn, admitted that it would likely be a futile battle.

"I think there will be a vote on that. I just don't think Democrats will let that pass," Cornyn, R-Texas, said Thursday. "We will vote on defunding (Planned Parenthood) on the (continuing resolution) in some form or another."

"There's nothing principled about the idea of another government shutdown," Mr. Obama said in the video. "There's nothing patriotic about denying the progress you've worked so hard to make."

In their own video, Republicans continued to criticize the Iran nuclear deal, which Senate Republicans failed to block earlier this week.

"This is a deal that fails to meet even the administration's own objectives," Sen. Shelley Moore Capito, R-West Virginia, said in a message released Saturday. "Because the president operated from a position of concession and not of strength, the American people are left with a bad deal."

The West Virginia Republican asserted that reversing sanctions relief on Tehran will now be "next to impossible," even if the country chooses to violate the agreement.

"The regime has already signaled it will defy attempts by the U.S. and other nations who aim to enforce this agreement," Capito said. The senator added that the blame for the deal should be laid at the feet of Democrats, saying that "a partisan minority in the Senate blocked a bipartisan majority from even taking a true up or down vote on whether the nuclear agreement should be approved."

The Senate voted twice on Thursday: once on a measure that would prevent the Obama administration from lifting sanctions against Iran unless it recognizes Israel as a state and releases American hostages, and another time on a disapproval resolution of the deal. Both failed to reach the 60 votes necessary to pass.