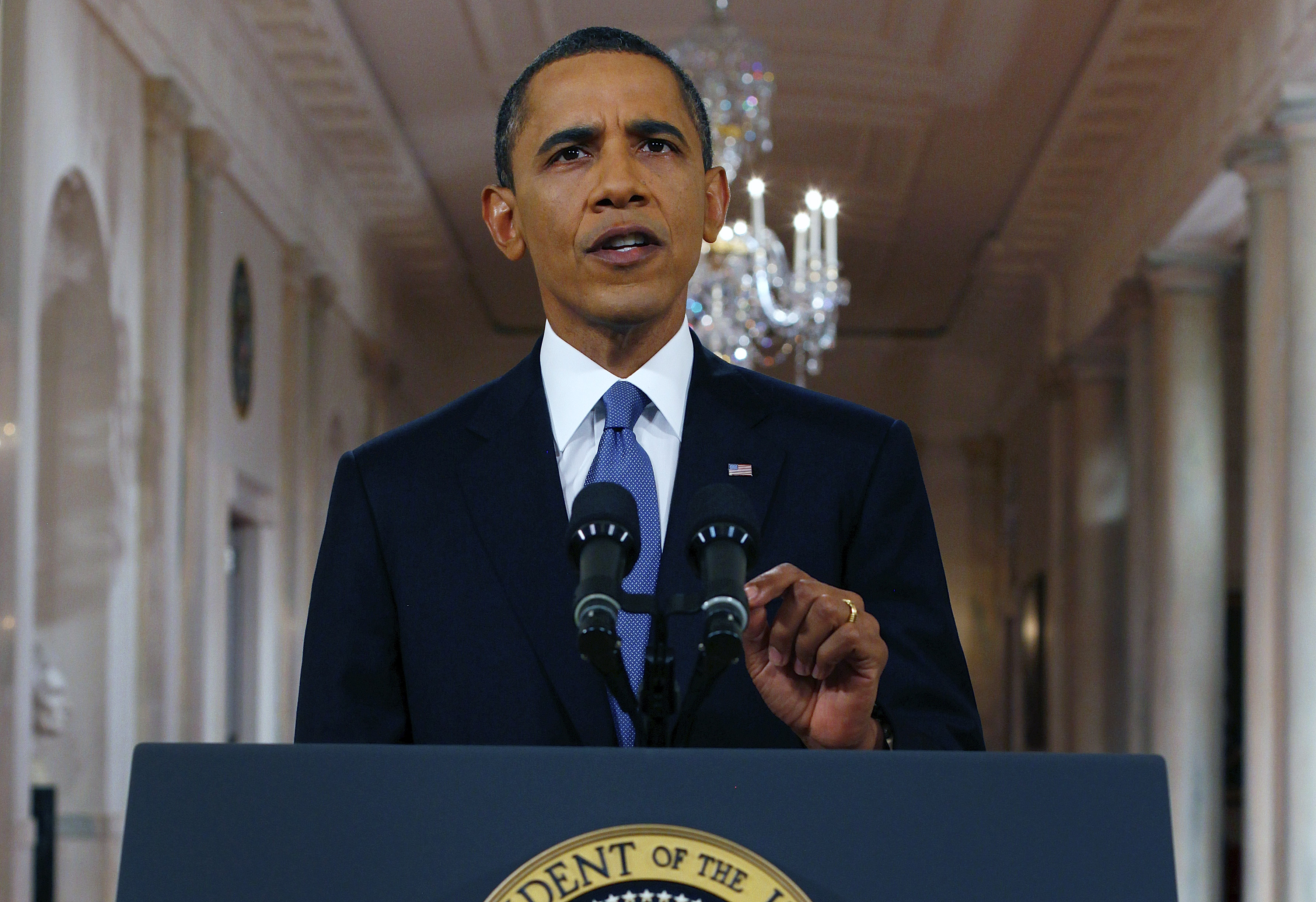 President Obama on Wednesday night informed the nation of his plans to withdraw 33,000 troops from Afghanistan by fall of next year, marking the beginning of the end of an increasingly unpopular war.

"The tide of war is receding," Mr. Obama said from the White House, promising that the wars in Iraq and Afghanistan will both come to a "responsible end."

Ten thousand troops will leave Afghanistan by the end of this year, the president announced, with another 23,000 leaving no later than September 2012. That would leave roughly 68,000 American troops in Afghanistan to continue the decade-long war.

Mr. Obama struck an optimistic note about the ongoing fight, saying "the light of a secure peace can be seen in the distance." But he also acknowledged the great costs of the war, economic and otherwise - a cost many say the U.S. can no longer afford to bear.

"America, it is time to focus on nation building here at home," he said.

The timetable for withdrawal is more aggressive than some military advisers had urged -- and with two months before Mr. Obama will be up for re-election, he will be able to give voters evidence that he is committed to bringing troops home. Yet even if all 33,000 troops are withdrawn, there will still be roughly twice as many troops in Afghanistan as when Mr. Obama took office in January 2009.

Mr. Obama said the U.S. has made progress in its fight against al Qaeda, noting the killing of Osama bin Laden. But, he said, "Al Qaeda remains dangerous, and we must be vigilant against attacks."

While the fight continues, Mr. Obama stressed that troop reductions will continue past the initial 33,000. By 2014, he said, Afghanistan will be responsible for its own security. Next May, the U.S. will host a summit in Chicago with NATO allies and partners to shape the next phase of the security transition.

"This is the beginning - but not the end - of our effort to wind down this war," Mr. Obama said. (watch the full speech at left)

Senior White House officials said Wednesday that public opinion polls did not influence the president's decision, but that Mr. Obama is keenly aware that Americans are growing tired of the costly fight. A recent CBS News poll showed that 64 percent of Americans now want the number of troops in Afghanistan decreased.

While the plans for withdrawal are more aggressive than some expected, they fall short of the expectations set by both liberals and conservatives who have grown doubtful of the mission.

"Here we are, trying to build a nation that by all accounts that doesn't maybe doesn't want to be rebuilt," Democratic Sen. Joe Manchin of West Virginia said Wednesday night on the CBS Evening News.

Mr. Obama stressed, "We will not try to make Afghanistan a perfect place. We will not police its streets or patrol its mountains indefinitely. That is the responsibility of the Afghan government."

What the U.S. will do, he said, is "build a partnership with the Afghan people that endures - one that ensures that we will be able to continue targeting terrorists and supporting a sovereign Afghan government."

The president expounded upon the broader nature of the United States' engagement around the world, saying, "We stand not for empire, but for self-determination."

Facing criticism from hawks, like Sen. John McCain, R-Ariz., who say the pace of withdrawal is too swift, Mr. Obama insisted that the U.S. is beginning the drawdown from a position of strength.

McCain: "Unnecessary risk" in Obama's Afghanistan plan
In Afghanistan, who will pick up where the U.S. leaves off?

"Al Qaeda is under more pressure than at any time since 9/11," he said. "Together with the Pakistanis, we have taken out more than half of al Qaeda's leadership."

Some skeptics have voiced concern that the U.S. is investing too much in Afghanistan while losing sight of al Qaeda's growth in other countries, like Pakistan, Yemen or Somalia.

The White House maintains, however, that it has made strides against al Qaeda on multiple fronts. Mr. Obama said the U.S. will continue to press Pakistan to cooperate in securing the region.

"There should be no doubt that so long as I am president, the United States will never tolerate a safe-haven for those who aim to kill us: they cannot elude us, nor escape the justice they deserve," he said.