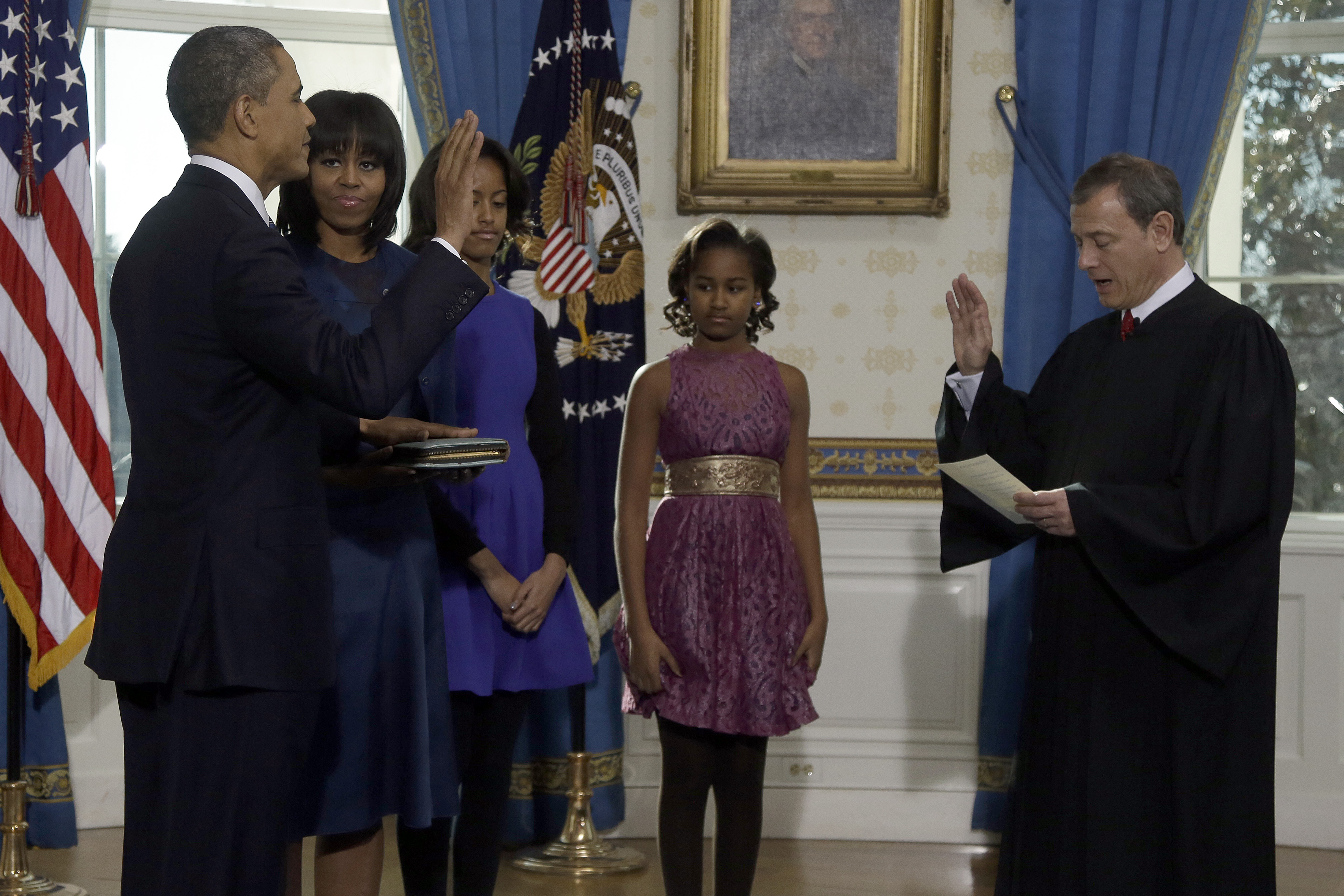 As mandated by the U.S. Constitution, President Obama was sworn in at 11:55 a.m. ET by Chief Justice John Roberts for his second term as president.

The president took the oath during a small, private ceremony in the White House Blue Room, with his hand on a Bible from First Lady Michelle Obama's family, which was held by her during the oath.

"The bible was a gift from the First Lady's father, Fraser Robinson III, to his mother, LaVaughn Delores Robinson, on Mother's Day in 1958," according to the Presidential Inaugural Committee. "Mrs. Robinson was the first African American woman manager of a Moody Bible Institute's bookstore; this was the only Bible she ever used."

The Obamas' daughters, Sasha and Malia, stood between the first lady and Roberts. "I did it," Mr. Obama said to his daughters as he hugged them after taking the oath.

Earlier this morning, Vice President Joe Biden took his oath of office at a private ceremony in the Vice President's residence at the Naval Observatory in Washington, D.C.

The two were sworn in today, Jan. 20, the Constitutionally-mandated date for the president to be sworn into office. Because it's a Sunday, however, the public inauguration ceremony will take place tomorrow, with the two taking their oaths again at the West Front of the Capitol, followed by all the pomp and circumstance afforded to inaugurals.

This year is the seventh Sunday-Monday inauguration split; the last time this happened was in 1985 for Ronald Reagan's second inauguration. Interestingly, Mr. Obama's two oath-takings this year matches his inauguration in 2009: due to a verbal flub by Chief Justice Roberts as he administered the oath, the president took the oath again later with Roberts at the White House, to make sure they hadn't run afoul of the Constitution earlier in the day.  Mr. Obama's four oaths (two this year and two in 2009) matches the record set by Franklin Roosevelt - though Roosevelt took one oath for each of his four inaugurations.

While the full inauguration ceremony is tomorrow, Mr. Obama today is marking the occasion - as well as remembering the life of Martin Luther King Jr. - around Washington, D.C.  Earlier today, he and Biden laid a wreath at the Tomb of the Unkowns at Arlington National Cemetery.  Then, Mr. Obama and his family attended church in downtown D.C. at the Metropolitan African Methodist Episcopal Church - celebrating its 175th anniversary, it's known as the "National Cathedral of African Methodism."

Tonight, the Obamas and the Bidens will speak to donors at a candlelight celebration at the National Building Museum.