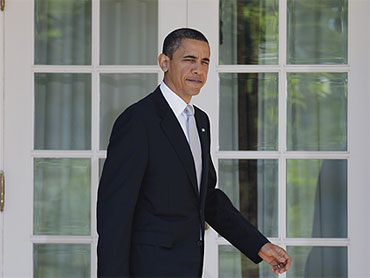 President Barack Obama is going back to the Gulf of Mexico, this time venturing on to new ground tainted by oil, before he speaks to the nation about what he's seen in the afflicted states and what to expect in the weeks ahead.

Before the start Monday of a two-day trip to Mississippi, Alabama and Florida, the White House announced Mr. Obama would order BP to establish a major victims' compensation fund. When he returns to Washington on Tuesday evening Mr. Obama will use his first Oval Office speech as president to address the catastrophe.

Mr. Obama's first three trips to the Gulf took him to the hardest-hit state, Louisiana. On Monday, Day 56 since BP's leased Deepwater Horizon drilling rig exploded and unleashed a fury of oil into the Gulf, he's flying to Gulfport, Miss. From there he'll travel along the coast to Alabama, where oil was washing up in heavy amounts along the shores Sunday in the eastern part of the state.

He'll be met by state and local officials eager for him to show command, provide manpower and supplies and also tell the public that despite the catastrophe that's crippling the fishing and tourist trades, many beaches are still open.

The day includes a speech and a ferry ride to view barrier islands in Alabama where oil has come ashore. Mr. Obama has not taken to the water in his previous Gulf visits.

Although BP is now siphoning off significant amounts of oil from its runaway well 5,000 feet below the ocean's surface, the leak won't be killed until relief wells are completed in August. At the same time more accurate estimates of the spill have brought the enormity of the disaster into focus. Already potentially more than 100 million gallons of crude expelled into the Gulf, far outstripping the Exxon Valdez disaster.

Now the nation may have to settle in for a long, hot summer of oil and gas spewing relentlessly from the ocean floor, driving residents to anger and despair, ruining precious marshlands, and poisoning pelicans, turtles and other wildlife.

BP deployed undersea sensors Sunday to better measure the flow of crude while drawing up new plans to meet a government demand that it speed up the containment effort ahead of Mr. Obama's visit.

In BP's revised strategy, the company hopes to capture up to 53,000 barrels of oil a day by the end of June, two weeks earlier than originally planned, an administration official told CBS Radio News White House correspondent Peter Maer.

BP is currently capturing about 630,000 gallons of oil a day, but hundreds of thousands more are still escaping into the Gulf. The company has said that it could begin siphoning an additional 400,000 gallons a day starting Tuesday by burning it using a specialized boom being installed on a rig.

The next day, Wednesday, Mr. Obama will convene his first meeting with BP PLC executives, expected to include the company's much-criticized CEO, Tony Hayward. The president will tell company officials he expects them to establish a multibillion-dollar compensation fund for people and companies damaged by the spill, to be administered by an independent panel, and that he will use his legal authority to ensure BP complies, White House officials said.

Coast Guard Adm. Thad Allen, the government's point person on the spill, said the administration was "very concerned" about the claims process during an appearance on "Face the Nation" Sunday.

"It's not clear to us that there's the right of transparency involved concerning the data, how long it takes to pay claims. We'll be talking about an independent third party that can administer a fund to make sure it happens quicker."

The steps add up to Mr. Obama's most concerted efforts so far to assert leadership in face of the calamity, with the White House exercising every tool at its disposal - an on-scene visit by the president, a speech from the Oval Office, the use of the power of the presidency to extract concessions from BP. The White House hopes it will be enough to win back the confidence of a skeptical public.