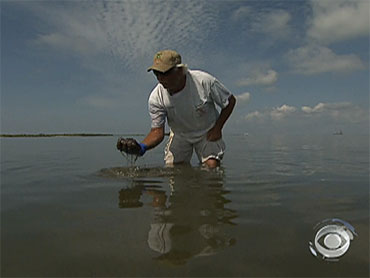 BP mounted a more aggressive response to the oil spill in the Gulf of Mexico on Sunday as it started deploying undersea sensors to better measure the ferocious flow of crude while drawing up new plans to meet a government demand that it speed up the containment effort ahead of President Obama's visit to the coast.

The financial ramifications of the disaster are growing by the day as the White House and states put pressure on BP to set aside billions of dollars to pay spill-related claims in a move that could quickly drain the company's cash reserves and hasten its path toward possible bankruptcy.

Numbers released by BP in London on Monday put the overall cost of the company's oil spill response at $1.6 billion, to date.

BP PLC spokesman Mark Proegler said the company would not make public its response due Sunday to a letter from the Coast Guard demanding that it intensify the efforts to stop the spill. One of the actions BP took Sunday was to use robotic submarines to begin positioning sensors inside the well to gauge how much oil is spilling.

The robots were expected to insert the pressure sensors through a line used to inject methanol - an antifreeze meant to prevent the buildup of ice-like slush - into a containment cap seated over the ruptured pipe, BP spokesman David Nicholas said.

BP was installing the sensors at the request of a federal team of scientists tasked with estimating the flow. The necessary equipment was first identified last week, and the installation procedures were approved over the weekend, said Coast Guard Lt. Cmdr. Tony Russell, a spokesman for Adm. Thad Allen, the top federal official in charge of the spill response. The work should be completed by Tuesday.

Scientists have wanted better data on the flow rate. But Russell said the installation of the sensors had to be timed so it did not interrupt the work of the containment cap. That cap was installed earlier this month and has been gradually brought toward its full capacity, although oil continues to escape the well.

Scientists haven't been able to pin down just how much oil is leaking into the Gulf, although the high-end estimates indicated the spill could exceed 100 million gallons. The government has stressed that the larger estimates were still preliminary and considered a worse-case scenario.

Allen, the Obama administration's point man on the oil spill, told CBS' "Face the Nation" on Sunday that government officials think the best figures are from a middle-of-the-road estimate, which would put the spill at around 66 million gallons of oil. That is about six times the size of the Exxon Valdez spill.

Allen also told "Face the Nation" host Bob Schieffer that the federal government would oversee BP's payment of claims to residents and businesses along the Gulf Coast who have been financially impacted by the spill.

"We've been very concerned about the claims process," Allen told Schieffer. "It's not clear to us that there's the right of transparency involved concerning the data, how long it takes to pay claims. We'll be talking about an independent third party that can administer a fund to make sure it happens quicker."

BP is currently capturing about 630,000 gallons of oil a day, but hundreds thousands more are still escaping into the Gulf. The company has said that it could begin siphoning an additional 400,000 gallons a day starting Tuesday by burning it using a specialized boom being installed on a rig - and any new success would be welcome news for Obama as he returns to the Gulf.

The president was scheduled to arrive in the Gulf on Monday for a two-day visit that will be followed by a nationally televised address to the American people on Tuesday and a sit-down with BP executives Wednesday. The crisis has already become a crucial test for the Obama presidency as it takes a greater toll on his image with each day that more oil gushes into the sea.

"We're at a kind of inflection point in this saga, because we now know that, what essentially what we can do and what we can't do, in terms of collecting oil, and what lies ahead in the next few months," senior adviser David Axelrod said on NBC's "Meet the Press. "And he wants to lay out the steps that we're going to take from here to get through this, through this crisis."

As conveyed by Allen, Obama wants an independent, third party to administer an escrow account paid for by BP to compensate those with "legitimate" claims for damages. The amount of money set aside will be discussed during talks this week between the White House and BP, but the request will most definitely be in the billions.

Louisiana's treasurer has told The Associated Press that it wants $5 billion. Florida said it wants $2.5 billion.

"We are aware of the request," said BP spokeswoman Sheila Williams in London. She declined to comment further.

BP could have to tap its cash reserve to pay the fund while also borrow money to comply. That, however, presents a potential problem because the company's borrowing costs are likely to be a lot higher due to investor concerns.

Oil again began washing up in heavy amounts along the shores of Orange Beach, Ala. on Sunday afternoon as the winds shifted, turning the surf into an oily red mixture that left brown stains at the surf line.

A plane flew along the coast pulling a sign that read: "Obama, 55 days. What's it gonna take?"

Earlier in the day, crews wearing rubber globes and boots used shovels to scoop up the oil, sand and tar ball mixture and put it into trash bags.

The disposal of oil-soaked dirt and sand is part of a broad effort playing out across the Gulf Coast to clean up the mess.

Waste Management received a contract from BP to transport waste produced by cleanup crews assigned to work the stretch of the coastline. Ken Haldin, a Waste Management spokesman, said Sunday that the company has designated 65 trucks and 535 containers that are being filled with solid oil waste.

Waste Management has designated three landfills in three different states that are operated by the company to handle the oily refuse. Haldin noted that before the refuse is dumped, it has to be analyzed by both the waste removal company and by local government environmental authorities to make sure it is nonhazardous.

Waste Management also is handling some of the liquid waste skimmed from the ocean by cleanup crews, and has set up special equipment, including vacuum trucks, along the docks that separates oil from the water. Once separated, the oil will be resold to oil services companies.

"This is a major mobilization effort," noted Haldin.