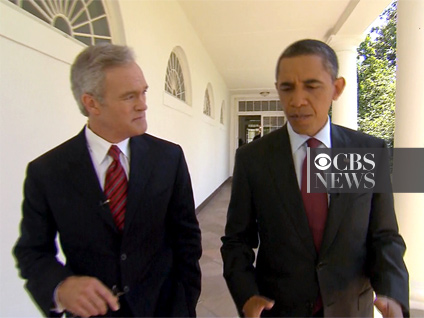 President Obama on Tuesday said he cannot guarantee that retirees will receive their Social Security checks August 3 if Democrats and Republicans in Washington do not reach an agreement on reducing the deficit in the coming weeks.

"I cannot guarantee that those checks go out on August 3rd if we haven't resolved this issue. Because there may simply not be the money in the coffers to do it," Mr. Obama said in an interview with CBS Evening News anchor Scott Pelley, according to excerpts released by CBS News.

The Obama administration and many economists have warned of economic catastrophe if the United States does not raise the amount it is legally allowed to borrow by August 2.

Lawmakers from both parties want to use the threat of that deadline to work out a broader package on long-term deficit reduction, with Republicans looking to cut trillions of dollars in federal spending, while Democrats are pushing for a more "balanced approach," which would include both spending cuts and increased revenue through taxes.

The Debt Limit fight: A primer

Democratic and Republican lawmakers are expected to hold another round of negotiations with Mr. Obama at the White House Tuesday afternoon on long-term deficit reduction, though talks have yielded little results to date.

Mr. Obama told Pelley "this is not just a matter of Social Security checks. These are veterans checks, these are folks on disability and their checks. There are about 70 million checks that go out."

More from the interview:

Obama: Boehner "would like to do the right thing"
Obama: "Nobody can be messing with our embassy"
Video: Watch more of Obama's comments on the debt limit battle

Mr. Obama's comments followed remarks from the Senate's top Republican, who said Tuesday that he did not see a way for Republicans and Democrats to come to agreement on meaningful deficit reduction as long as Mr. Obama remains in office.

"After years of discussions and months of negotiations, I have little question that as long as this president is in the Oval Office, a real solution is probably unattainable," Senate Republican Leader Mitch McConnell said in remarks on the Senate floor.

Still, McConnell said Republicans would "do the responsible thing" to avoid default, suggesting that a deal on the debt ceiling could be reached without a "real" deficit reduction package.

"The president has presented us with three choices: smoke and mirrors, tax hikes, or default. Republicans choose none of the above. I had hoped to do good, but I refuse to do harm. So Republicans will choose a path that actually reflects the will of the people, which is to do the responsible thing and ensure that the government doesn't default on its obligations," he said.

Mr. Obama has repeatedly said he wants a deal that would allow the U.S. to avoid confronting the issue again until after the 2012 elections and vowed on Monday that he would "not sign a 30-day or a 60-day or a 90-day extension."

"This the United States of America and, you know, we don't manage our affairs in three-month increments. You know, we don't risk U.S. default on our obligations because we can't put politics aside," Mr. Obama told reporters at the White House yesterday.