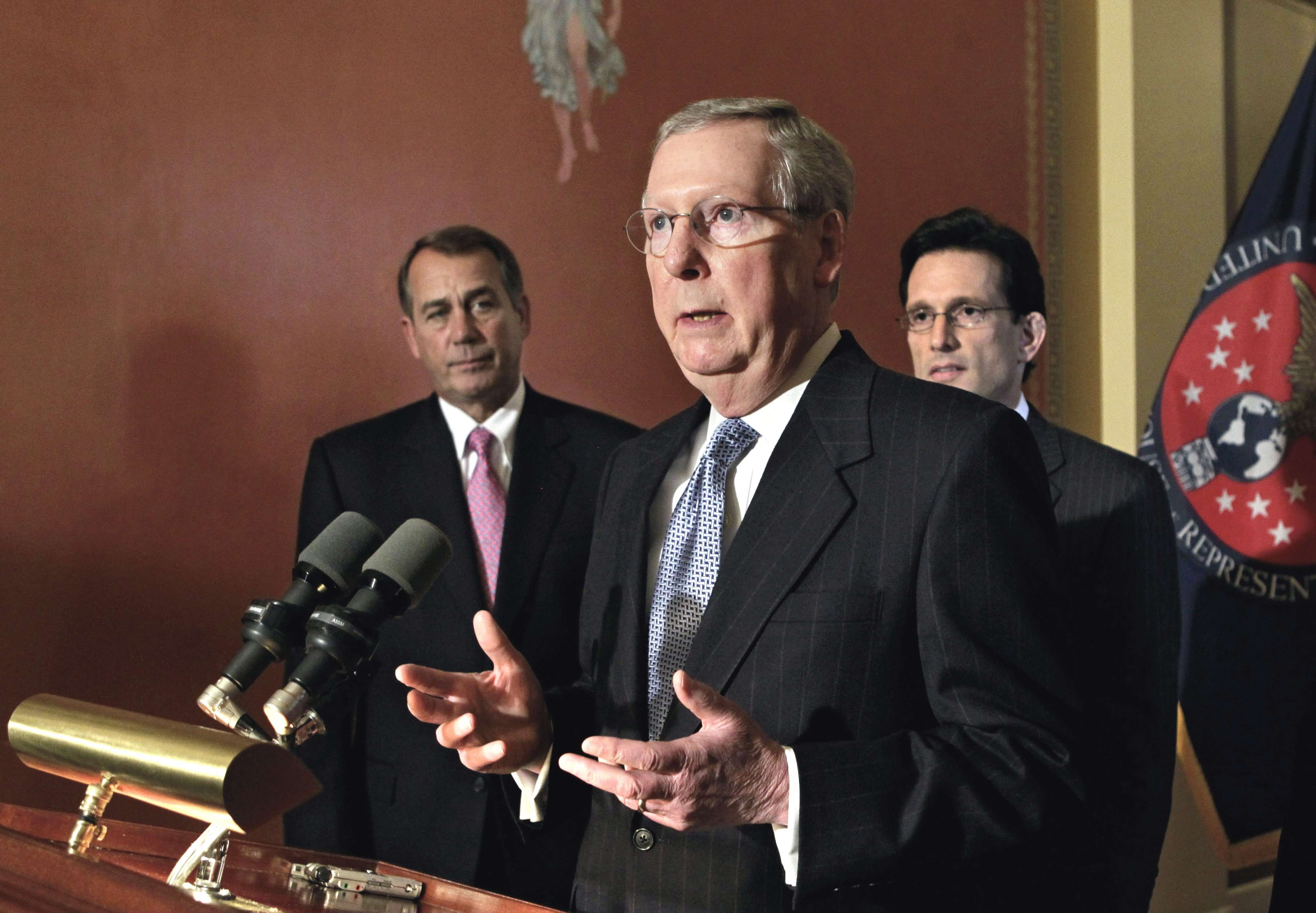 The Senate's top Republican said Tuesday that he did not see a way for Republicans and Democrats to come to agreement on meaningful deficit reduction as long as President Obama remains in office.

"After years of discussions and months of negotiations, I have little question that as long as this president is in the Oval Office, a real solution is probably unattainable," Senate Republican Leader Mitch McConnell said in remarks on the Senate floor.

The remarks come as negotiations between Republicans and Democrats intensify on long-term deficit reduction ahead of a looming deadline on how much the United States can legally borrow.

Treasury Secretary Timothy Geithner and many economists have warned of economic catastrophe if the $14.3 trillion debt ceiling is not raised before August 2.

And lawmakers from both parties want to use the threat of that deadline to work out a broader package on long-term deficit reduction. Republicans are looking to cut trillions of dollars in federal spending, while Democrats are pushing for a more "balanced approach," which would include both spending cuts and higher revenue to the government.

The Debt Limit fight: A primer

The White House called McConnell's remarks "unfortunate," saying Mr. Obama "has made clear his willingness to compromise, to take heat from his own party." (See at left.)

"This president's going to be in office for at least another 18 months, and I think the American people expect Congress to work with him," said White House Press Secretary Jay Carney.

McConnell suggested later in his remarks that the debt ceiling will still be raised, but without a broader deal on long-term deficit reduction.

"The president has presented us with three choices: smoke and mirrors, tax hikes, or default. Republicans choose none of the above. I had hoped to do good, but I refuse to do harm. So Republicans will choose a path that actually reflects the will of the people, which is to do the responsible thing and ensure that the government doesn't default on its obligations," he said.

Mr. Obama says he will not sign a short-term deal, saying, "This the United States of America and, you know, we don't manage our affairs in three-month increments."

McConnell is not the only member of his party ratcheting up the rhetoric Tuesday. Speaking of Mr. Obama, House Speaker John Boehner of Ohio said "the debt limit increase is his problem." (see at left.)

"And I think it's time for him to lead by putting his plan on the table," he continued. "Something that the Congress can pass."

Republicans have walked away from negotiations led by Mr. Obama to reach a $4 trillion deficit reduction deal over ten years, saying a smaller deal is more feasible.

Boehner has been under pressure from his Republican colleagues, with many in the House GOP caucus -- particularly the Tea Party-backed freshmen and his deputy, House Majority Leader Eric Cantor - bucking his apparent willingness to compromise with Mr. Obama on a "grand bargain" to reach the $4 trillion figure.

In a closed-door meeting with the caucus Tuesday morning, he explained why he believed the negotiations fell apart.

According to a source in the room, Boehner said he initially sought a larger deal that included reform to entitlement programs. Mr. Obama agreed, he said -- on the condition that the deal include revenue increases.

In Boehner's telling, he refused to consider tax increases but said he would discuss tax reform -- lowering tax rates while closing tax loopholes in a way that was revenue neutral. Mr. Obama countered that he would consider corporate tax reform but not personal tax reform.

Boehner, the source said, told his caucus he wanted both, arguing that such an approach is necessary because some small business owners claim earnings as personal income. Mr. Obama agreed, on the condition that the Bush-era tax cuts for low earners be made permanent -- presumably while the tax cuts for high earners are allowed to expire. In Boehner's telling, that's when talks began to break down.

Mr. Obama is continuing to push for the largest possible deal, and urged lawmakers Monday to "eat our peas" and get it done.

"It is possible for us to construct a package that would be balanced, would share sacrifice [and] would involve both parties taking on their sacred cows," he said.

What's behind the push for a fourth stimulus check
Corbett Daly