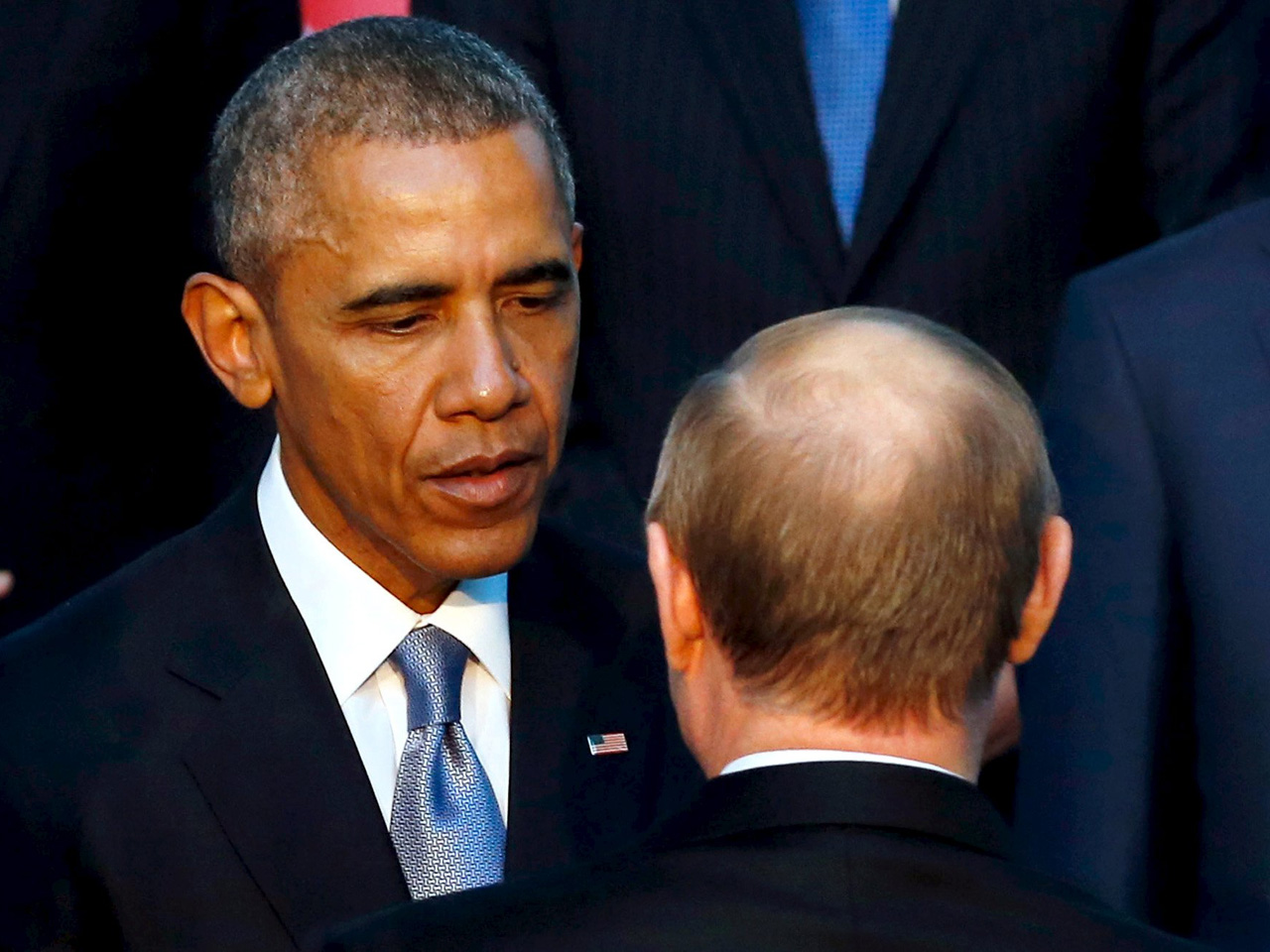 ANTALYA, Turkey - President Barack Obama and Russian President Vladimir Putin have held an informal meeting on the sidelines of the Group of 20 economic summit in Turkey.

The two leaders chatted in a foursome with Obama's national security adviser Susan Rice and a Russian aide. Their meeting was visible on a television feed provided by the summit's host country of Turkey, but their conversation couldn't be heard. Reporters weren't allowed in for the meeting, which took place during a working lunch for leaders attending the summit.

Obama and Putin both leaned in close to each other as they talked, with Obama gesturing expressively with his hands.

The huddle comes as the U.S., Russia and other countries pursue a new diplomatic plan to try to end Syria's civil war.

Earlier Sunday, Obama opened two days of talks at the summit by pledging solidarity with France in the effort to hunt down the perpetrators of the Paris attacks and bring them to justice. He said "the skies have been darkened" by the Paris attacks, but offered no details about what the U.S. or its coalition partners might do to step up its assault against ISIS.

"The killing of innocent people, based on a twisted ideology, is an attack not just on France, not just on Turkey, but it's an attack on the civilized world," Obama said after meeting with Turkish President Recep Tayyip Erdogan. In addition to the Paris attacks, ISIS is blamed for two deadly bombings in Turkey this year.

The specter of the ISIS threat and Syria's civil war hanged over the Turkish seaside city of Antalya as Obama and other leaders descended for the Group of 20 summit meeting of leading rich and developing nations. Although the overlapping crises were already on the lineup for talks, they were thrust to the forefront by elaborately coordinated attacks that killed 129 in the French capital just two days earlier. It was the most destructive attack in the West blamed on the extremist group.

In a fresh reminder of the ISIS' expanding capacity to wreak havoc, five Turkish police officers were injured Sunday when a suicide bomber blew himself up during a police raid on a suspected ISIS hideout near the Syrian border. Turkish security forces also rounded up 20 suspected ISIS militants in and around Antalya in the run-up to the G-20.

Yet beyond sweeping condemnations of ISIS, leaders have yet to float new, specific proposals for intensifying the fight following the Paris attacks.

European Union leader Donald Tusk called on G-20 leaders to show "full determination" against terrorism and urged cooperation to prevent terror financing - a step that nations have already been pursuing for more than a year. Obama, asked whether he would consider additional action against ISIS, wouldn't tip his hand.

The United States, along with coalition partners, has been bombing ISIS in Iraq and Syria for more than a year with limited success. Obama has been reluctant to get pulled deeper into the conflict and has ruled out a major U.S. ground offensive, although he recently authorized sending a few dozen special operations forces into Syria.

Putin and Obama, who are now on opposing sides of Syria's bloody civil war, had officially planned no formal sit-downs while in Antalya - just a few hundred miles from Turkey's border with Syria.

"It's only possible to deal with the terror threat and help millions of people who lost their homes by combining efforts of the entire global community," Putin said earlier.

Obama also scheduled a meeting Sunday with King Salman of Saudi Arabia, a majority Sunni nation that opposes Assad and is deeply skeptical of Iran's involvement in any solution to the conflict.