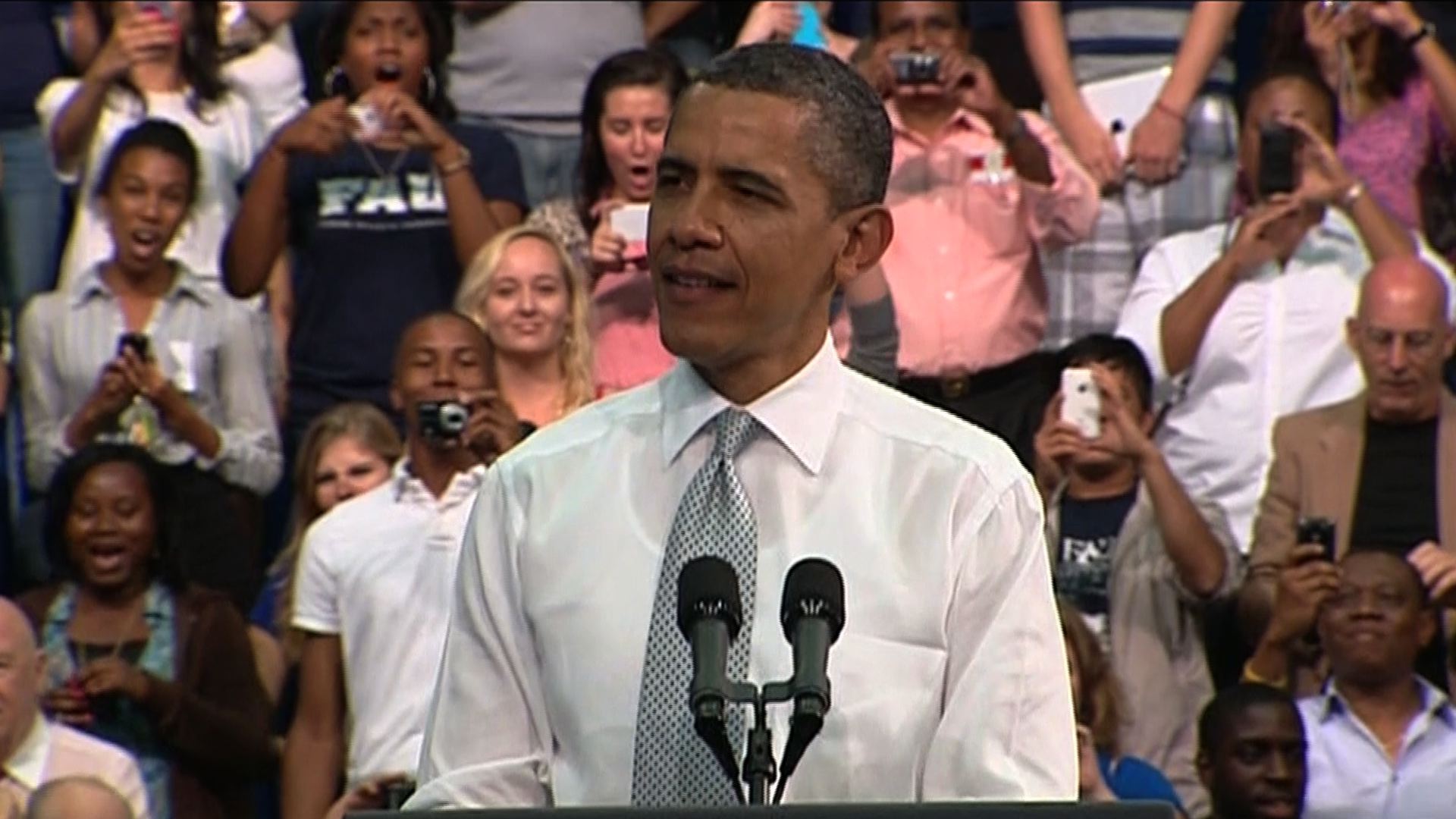 (CBS/AP) BOCA RATON, Fla. - President Barack Obama said on Tuesday that the choice facing voters this November will be as stark as in the milestone 1964 contest between Lyndon Johnson and Barry Goldwater - one that ended up with one of the greatest Democratic landslides in U.S. history.

The president made his comments during a blitz through Florida, and right before his general election foe was essentially decided. Republican Rick Santorum dropped out of the presidential contest, making it clear that Obama would face off against Mitt Romney, the former Massachusetts governor.

Obama is using his Florida swing to call again for Congress to raise taxes on millionaires, a populist pitch on an issue that he hopes will help define the differences with nominee-to-be Romney.


The president outlined his support for the so-called Buffett rule at a university speech in Boca Raton, Fla., arguing that wealthy investors should not pay taxes at a lower rate than middle-class wage earners.

The push for the Buffett rule, named after billionaire investor Warren Buffett, comes ahead of a Senate vote next week and as millions of Americans prepare to file their income tax returns. The plan has little chance of passing Congress, but Senate Democrats say the issue underscores the need for economic fairness.

"You can't pay down a deficit by taking in 4.6 trillion less money especially when denying you will make all of these cuts," said Obama. "More than a trillion of tax cuts they propose will go to people making 250,000 a year which is an average of 150,000 dollars for every millionaire and billionaire."

Earlier in the day, Obama told donors at the first of three campaign events in this battleground state "this election will probably have the biggest contrast that we've seen maybe since the Johnson-Goldwater election, maybe before that." The events were expected to raise at least $1.7 million.

In his 1964 race against Barry Goldwater, Johnson carried 44 of 50 states and won 61 percent of the popular vote, the largest share of any candidate since 1820.

Running on a record that included the Great Society, Johnson portrayed Goldwater as a dangerous extremist. He was aided by Goldwater's GOP convention speech, in which the candidate proclaimed, "Extremism in the defense of liberty is no vice."

In a reception at a gated community in Palm Beach Gardens, Obama said Democrats would ensure the rich pay their fair share, while focusing on investments in education, science and research and caring for the most vulnerable.

By contrast, he said, Republicans would dismantle education and clean energy programs so they can give still more tax breaks to the rich.

Obama did not mention Romney by name, but the economic fairness message was the theme of his day - and aimed squarely at the wealthy former Massachusetts governor.

Obama was capping his day at a large rally-style event in Hollywood, Fla., that was to include a musical performance by singer John Legend.