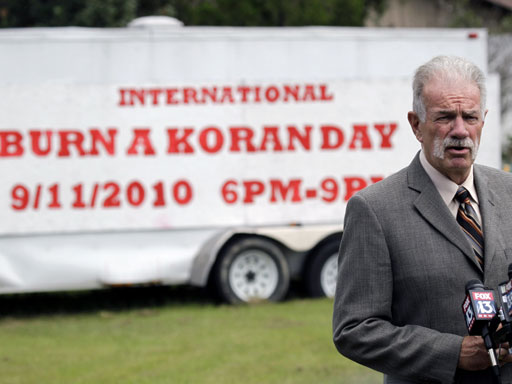 President Obama said today that his administration had an obligation to contact Rev. Terry Jones, the Florida pastor planning to hold a Quran burning, because his plans put troops overseas in danger.

"We've got an obligation to send a very clear message this kind of behavior threats of action puts our young men and women in harms way," Mr. Obama said at a White House press conference today.

Jones planned to burn piles of the Muslim holy book to mark the ninth anniversary of the Sept. 11, 2001 terrorist attacks. He announced yesterday that he called off the burning after hearing that the controversial Islamic community center planned to be built near Ground Zero in New York would be moved to a different location. However, he later said he was reconsidering the burning now that it's clear there are no plans to move the Islamic center in New York.

Mr. Obama also said today that he wants to "make sure we don't start having a bunch of folks across the country think this is a way to get attention."

He continued, "This is away of endangering our troops... who are sacrificing for us to keep us safe. You don't play games with that."

Mr. Obama, as well as other leaders like Secretary of State Hillary Clinton and Gen. David Petraeus, had given public statements in recent days condemning the burning. Yesterday, Defense Secretary Robert Gates directly called Jones to urge him to call it off.

The president said today, however, "I hardly think we're the ones who elevated this story. But in the age of the Internet [the burning is] something that can cause us profound damage around the world, so we've got to take it seriously."

Mr. Obama noted that the planned Koran burning has already sparked riots and protests in Afghanistan.

The event is "is contrary to what this nation was founded on," the president said. He added he hopes Jones "prays on it and refrains from doing it."