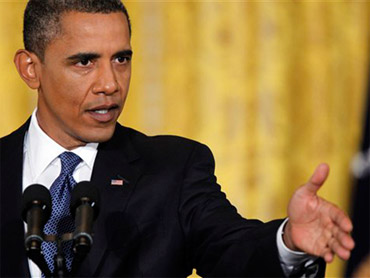 The word "stimulus" may have eight letters but the White House seems to think it's a four-letter word.

Earlier this week during a White House briefing we pressed Robert Gibbs on whether the President's plan for another $50 billion for roads and other infrastructure was a stimulus plan. He repeatedly refused to take the bait.

So what is it about that nasty word?

At today's press conference I asked the president if it's because the original stimulus is now so unpopular. He defended that stimulus: "It worked. It just hasn't done as much as we needed to do. We've still got a long ways to go and we're going to keep on doing it."

But he, too, carefully avoided actually saying the word.

I tried again: "So this is a second stimulus?"

It got a laugh form the press corps and a smile from the president, but it wasn't enough to break down the taboo on uttering that nasty word.

"Stimulate?" Apparently that's just fine. But "stimulus"? Heavens no. Wash out your mouth with soap.

Obama: "Fair" to Say I Haven't Fostered Cooperation in Washington

Obama on Afghan Corruption and the Hunt for Osama Bin Laden

Obama: Americans Shouldn't Turn on Each Other