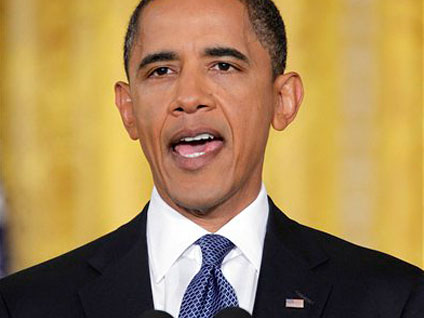 Asked about anti-Muslim sentiment in the United States, President Obama said at his press conference Friday that Americans "have to make sure that we don't start turning on each other."

"And I will do everything that I can as long as I'm president of the United States to remind the American people that we are one nation, under God," he continued. "And we may call that God different names, but we remain one nation. And, you know, as somebody who, you know, relies heavily on my Christian faith in my job, I understand, you know, the passions that religious faith can raise."

"But I'm also respectful that people of different faiths can practice their religion even if they don't subscribe to the exact same notions that I do, and that they are still good people and they are my neighbors and they are my friends and they are fighting alongside us in our battles," said Mr. Obama.

"And, you know, I want to make sure that this country retains that -- that sense of purpose," he added.

Concerns about anti-Islam sentiment have increased in recent weeks in part because of the debate over the planned Islamic cultural center near Ground Zero and the (possibly suspended) plans by fringe Florida Pastor Terry Jones' to burn copies of the Quran on September 11th.

Nearly one in five Americans erroneously believes that the President is Muslim, and just one in three say he is Christian.

In explaining the rise in anti-Muslim sentiment, Mr. Obama said, "You know, I think that at a time when the country is anxious generally and going through a tough time, then, you know, fears can surface -- suspicions, divisions can surface in a society. And so I think that plays a role in it."

He went on to laud former President George W. Bush for his comments about Islam after the Sept. 11 attacks.

"One of the things that I most admired about President Bush was, after 9/11, him being crystal clear about the fact that we were not at war with Islam," he said. "We were at war with terrorists and murderers who had perverted Islam, had stolen its banner to carry out their outrageous acts."

"And I think it is absolutely important now for the overwhelming majority of the American people to hang onto that thing that is best in us: a belief in religious tolerance; clarity about who our enemies are," the president added. "Our enemies are al Qaeda and their allies who are trying to kill us, but have been -- have killed more Muslims than just about anybody on Earth."