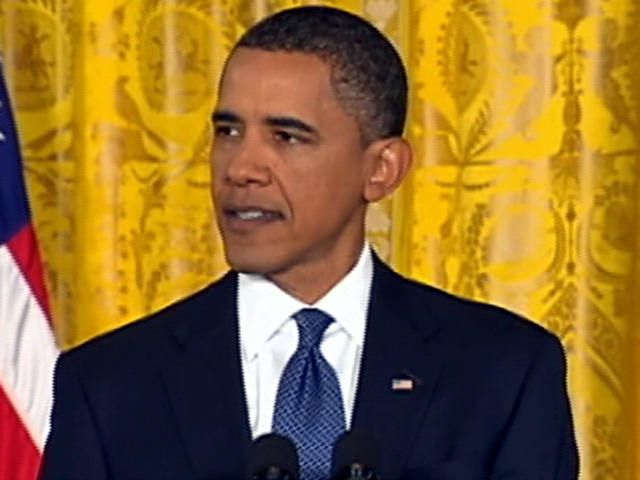 During his White House press conference Friday, President Obama was asked about the U.S. providing support to corrupt Afghan officials.

The CIA has allegedly been paying Mohammed Zia Salehi, Afghanistan's National Security Council chief of administration, who was arrested last month as part of a corruption investigation. Afghan President Hamid Karzai was angered by the arrest Salehi and ordered his release.

Mr. Obama began his answer by reiterating the U.S. mission in Afghanistan--to dismantle Al-Qaeda and not allow Afghanistan to be used as a terrorist base against the U.S., as it was for the 9/11 attack. He also explained that Afghanistan is a difficult place to transform. It's the second poorest country in the world, with 70 percent, a multiethnic population that doesn't trust each other and a central government lacking strength, he said.

He also took a swipe at the past administration's efforts in Afghanistan. After seven years of drift and seven years of policies when we were not effectively training Afghan security forces his administration, Mr. Obama stated, he is working with the Afghan government to train security forces and promote a political settlement in the region that can help reduce the violence.

Finally getting around to the corruption question, Mr. Obama said, his administration has helped Afghan President Karzai "stand up a broadly accepted, legitmate government and reduce corruption." He cited some progress. Four judges were indicted on corruption charges four years ago and 86 so far this year.

"We have seen Afghan-led efforts that have gone after police commanders, significant business people in Afghanistan, but we are a long way from where we need to be on that," he said. The president said that every time he talks with Karzai he advises him that the "only way to have stable government is if the Afghan people feel you are looking out for them, and that means making sure the tradition of corruption in the government is reduced."

Mr. Obama said his administration would keep the pressure on, but cautioned that reducing Afghan government corruption won't happen overnight and admitted that "some of our folks on the ground" may have "made compromises with people known to be engaged in corruption."

"I've said to the National Security team...let's be consistent in terms of how we operate across agencies, so our efforts are not seen as giving a wind and a nod to corruption," he said.

Mr. Obama added, "It is a challenging environment to do that."

Karzai has bristled at the prospect of Western advisors interfering with Afghan anti-corruption cases, and condemned reports that Afghan government officials CIA received payments in return for information.

Mr. Obama was also asked about capturing or killing Osama Bin Laden, who has been on the run for more than nine years.

He said that Bin Laden and other Al-Qaeda leaders have been driven deep underground, but killing or capturing Bin Laden would be "extremely important to our national security" and remains a "high priority."

In December 2009, Secretary of Defense Robert Gates said he had no idea where Osama Bin Laden was hiding. That still seems to be the case, despite the efforts cited by Mr. Obama.