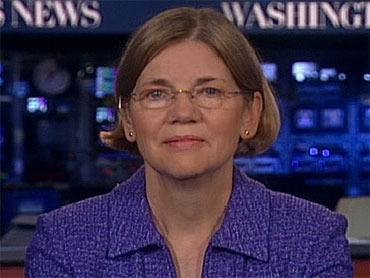 During a press conference in which he continually returned to the theme of helping middle-class Americans, President Obama may have hinted that he will soon tap Elizabeth Warren, a Harvard law professor and consumer advocate championed by the left, to head a new consumer financial protection agency.

His comments follow a meeting Tuesday between the president and Warren. The White House has only officially confirmed that Warren is among the candidates under consideration for the job.

When asked about the impact of the agency and Warren's potential appointment, Obama responded in somewhat vague terms.

"This agency I think has the capacity to really provide middle- class families the kind of protection that's been lacking for too long. Now, the idea for this agency was Elizabeth Warren's. She's a dear friend of mine. She is a tremendous advocate for this idea," he said. "...And, you know, I think what's fair to say is, is that I have had conversations with Elizabeth over these last couple of months, but I'm not going to make an official announcement until -- until it's ready."

The Bureau of Consumer Financial Protection was created as part of the regulatory reform bill passed over two months ago. The agency's powers will include the ability to regulate credit card companies and other financial services, including mortgages. According to Mr. Obama, the "sole job" of the agency "is to protect families in their financial transactions."

The president was asked at the press conference about the likely tough Senate confirmation fight if he taps Warren, in light of expectations that Republicans will oppose her. He responded by suggesting the problem wasn't his pick but the Senate himself.

"I am concerned about all Senate nominations these days. I've got people who've been waiting for six months to get confirmed who nobody has an official objection to and who were voted out of committee unanimously, and I can't get a vote on them," he said.

The president added: "And it's very hard when you've got a determined minority in the Senate that insists on a 60-vote filibuster on every single person that we're trying to confirm, even if after we break the filibuster it turns out that they get 90 votes. They're just playing games."

Warren's support for unions and consumer groups has made her a favorite of the left, but she faces strong opposition from Wall Street and banks would not like to see a strong consumer advocate leading the new agency.

Warren was the chair of the Congressional Oversight Panel following the financial crisis of 2008, where she investigated the U.S. banking bailout.

If Mr. Obama does not pick Warren it will be a disappointment to the Democratic base, which the White House would like to see energized for the upcoming midterm elections.

Other candidates for the job, according to the AP, include assistant treasury secretary Michael Barr and Eugene Kimmelman, a deputy assistant attorney general in the Justice Department's antitrust division.