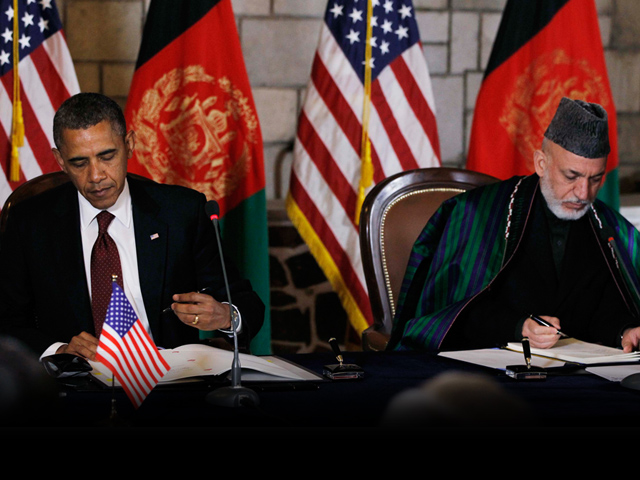 (CBS News) -- President Obama arrived in Afghanistan Tuesday for an unannounced visit to meet with U.S. troops stationed there and to sign a ten-year agreement with President Hamid Karzai on the role of U.S. forces beyond the end of the war in 2014.

Mr. Obama was set to meet with Karzai at the presidential palace in Kabul and then travel to Bagram Air Field to meet with troops and make a televised address around 7:30 p.m. ET.

Shortly after arriving, about midnight local time, President Obama and President Karza signed an agreement to designate Afghanistan a major non-NATO ally. The agreement says the U.S. will provide, aid, advisors and support after NATO combat troops leave in 2014.

Obama called it "a historic moment for our two nations.

More in The Killing Of Osama bin Laden

"I'm here to affirm the bond between our two countries and to thank Americans and Afghans who have sacrificed so much over these last ten years," said Mr. Obama.

"Neither Americans nor the Afghan people asked for this war yet for a decade we've stood together. Today with the signing of the strategic partnership agreement we look forward to a future of peace. Today we're agreeing to be long term partners."

After signing the partnership deal, Obama headed to Bagram air base, where he spoke to U.S. troops.

"The reason America is safe is because of you," Obama told the troops.

"The battle is not yet over," he told a cheering crowd at Bagram airbase. "There is going to be heartbreak and pain and difficulty ahead. But there is a light on the horizon because of the sacrifices you've made."

The visit comes on both the one-year anniversary of the death of Osama bin Laden and the day a new report from the Pentagon giving the war in Afghanistan a mixed review was released.

Issued twice a year to Congress, the report said overall insurgent attacks in Afghanistan fell last year for the first drop in five years and praised Afghan forces for their increased security capabilities. At the same time, the Defense Department said corruption remains widespread and violence in the southern region of Kandahar has increased.

There are around 130,000 forces in Afghanistan, including around 90,000 U.S. forces and 40,000 troops from other nations. Those forces are scheduled to end combat operations after 2014, about thirteen years after the war began.

The visit is the third trip for Mr. Obama as president, with his most recent time there taking place in late 2010.

Tuesday night's remarks also fall on the nine-year anniversary of President George W. Bush's speech aboard the U.S.S. Abraham Lincoln where a sign behind his back declared "Mission Accomplished" for the ship's return to port.

In the United States, the spat between the White House and presumptive Republican presidential nominee Mitt Romney continues to grow. The former Massachusetts governor has accused Mr. Obama and his campaign team of politicizing the death of Osama bin Laden a year ago Tuesday.

"I think them taking credit for the right decision is entirely appropriate. I think trying to attack me on that basis is disappointing and the wrong course," Romney said Tuesday in an interview with "CBS This Morning."

A day earlier, Mr. Obama reminded Americans that Romney had not always been as certain about the need to go after bin Laden.

"I said that we'd go after bin Laden if we had a clear shot at him and I did," Mr. Obama told reporters at the White House, referring to remarks he had made in 2007 in which he said he would authorize strikes in Pakistan without the Pakistani government's permission if he had enough intelligence to act.

Without mentioning Romney by name, Mr. Obama said, "if there are others who've said one thing, and now suggest they'd do something else, then I'd go ahead and let them explain."

The Obama campaign has released an ad with former President Bill Clinton touting Mr. Obama's decision and suggesting Romney might not have made the same call. The ad cites Romney's 2007 comment that it was "not worth moving heaven and earth spending billions of dollars just trying to catch one person."

Both CBS News and CBSNews.com will carry the speech live at 7:30 p.m. ET.