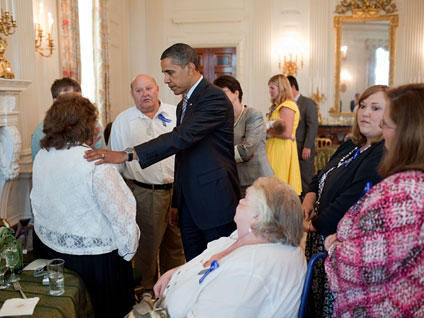 Critics have been on the White House for President Obama's lack of personal involvement in the BP oil spill and today the White House tried to do something about it, inviting family members of the 11 BP workers who died in the explosion on the Deepwater Horizon in April.

According to a statement put out by the White House, "The President expressed his condolences and told them that he, the First Lady and the entire administration are behind them and will be there long after the cameras are gone as they go through their unimaginable grief. He also said that while offshore drilling is a part of our nation's overall energy strategy, he simply could not go forward with new deepwater drilling until we have the proper safety measures in place to ensure that a tragedy like this never happens again."

Christopher Jones, whose brother Gordon died in the accident, was at the meeting.

"We took our opportunity to talk to the president specifically about the Death on the High Seas Act and getting it amended," he told CBS News.

Jones and his father have spent much of the week in Washington pushing Congress to change the 1920 Death on the High Seas Act, which limits liability for oil and shipping companies in terms of paying compensation to the families of workers who are killed on the job (specifically for accidents that occur farther than 3 miles offshore). He said the president pledged support to change the law.

"He specifically went from table to table and talked to each family individually, before and after he gave a brief presentation or speech to everybody. Before it was more of a welcome and general support that he was giving to all the families, you know after he had gotten some comments on DOHSA (Death on the High Seas Act), and he commented on those issues," Jones told CBS News Chief White House Correspondent Chip Reid.

He said that he's fighting this battle not only for his sister-in-law Michelle and her two children but for the entire oil industry.

"We are here not only for our family, we're not here for the other families, we're also here for everybody else in the future which, unfortunately and inevitably, will happen.... it may be a cruise ship next time, it may be a titanic, but unfortunately it's gonna happen."

Jones said he'd like more attention focused on the families, so this the law will get amended.

On Tuesday, testifying in Congress, Jones said that BP has not contacted his family. "They've made no overtures to us - we've actually, I've never spoken to somebody from BP, they've made no phone call, no nothing, to make any effort to reach out and at least extend their sympathies."

After the meeting with the President, some members of victims' families went back to the Capitol where they spoke with senators about changing the law. Billy Anderson, whose son Jason died in the explosion, was fairly blunt about how the loss of their loved ones fits into the daily response to the crisis in the gulf and asked that public doesn't forget the men who died.

"We can't get our boys back. We can clean up pelicans, we can clean up fish and they will live, they will continue to live, we cannot do that for our family members we lost. We can't wipe the oil off of them and wash with soap detergent and get them back. So please let's look at this from the right way," he said.

Robert Hendin is a CBS News White House producer. You can read more of his posts in Hotsheet here.
View CBS News In