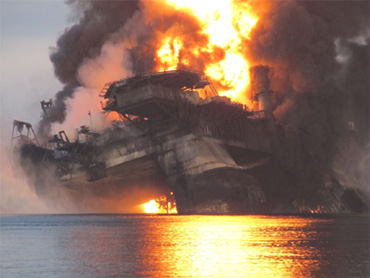 At an emotional Senate hearing, Chris Jones, whose brother Gordon was one of the 11 oil rig workers killed in the gulf blowout and explosion, said BP had not contacted the family, even to extend condolences.

Jones, who brought pictures of his brother's wife and children to the hearing, stunned senators who asked him about his contacts with BP when he told them there hadn't been any.

"They've made no phone call, no nothing to make any effort to reach out and at least extend their sympathies," Jones told members of the Senate Judiciary Committee.

Senators are considering changing maritime laws, including one from 1920 that prevents the families of the dead from collecting anything beyond lost wages and pure economic damages. Legal experts testified that victims of any industrial accident and even a car crash can sue for loss of companionship and other damages for the death of a loved one, but that right is denied to those who die on the high seas.

Another old law they are looking at limits the punitive damages BP can be subject to in lawsuits brought by fishermen and others along the gulf who suffer harm from the oil spill. That was the law that led the Supreme Court to slash payments to those hurt by the Exxon-Valdez oil spill to $500 million. An Alaska jury had initially awarded $5 billion.

Senator Patrick Leahy, D-Vt, Chairman of the Judiciary Committee, said this was about more than fairness -- it was about preventing future accidents. He said it is no surprise that oil companies "cut corners and sacrificed safety" after the Supreme Court capped the costs they would have to pay for any misconduct.

Maritime law expert Tom Gallagan, President of Colby-Sawyer college, told senators the risk of lawsuits are a key way to insure that companies operate safely and these out of date laws create a "climate of limited liability, under-compensation and the possibility of increased risk."

Jack Coleman, an energy consultant speaking for the industry, said if there were no caps on liability that could limit drilling and stop companies from getting the oil that America needs.

Senator Dick Durbin, D-IL, angrily told him if the companies can't accept the liability for the damage they cause, they should "stay the hell out of that business."

Special Report: Disaster in the Gulf Bob Fuss is CBS Radio News' Capitol Hill Correspondent. You can read more of his posts in Hotsheet here.
View CBS News In