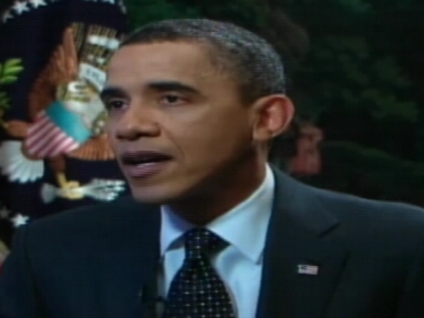 Responding to a deluge of questions regarding marijuana and drug policy that came from YouTube, President Obama today said he is not in favor of drug legalization.

However, acknowledging that the "war on drugs" has not been effective, Mr. Obama said he thinks of drugs as "more of a public health problem."

More than 140,000 questions were submitted to the president on the video website for his virtual question-and-answer session today. YouTube visitors cast more than 1 million votes, rating the questions positively or negatively. According to the Huffington Post, 198 of the 200 highest-rated questions related to drug policy.

While drug policy is hardly a top priority in Washington, Mr. Obama said it is an "entirely legitimate topic for debate."

In the top-rated YouTube video question, retired deputy sheriff MacKenzie Allen said, "The so-called war on drugs has been waged for 40 years at a cost of a trillion dollars and thousands of lives, with nothing to show for it but increased supplies of cheaper drugs and a dramatic increase in violence associated with the underworld drug market."

"Do you think there will or should come a time to discuss the possibility of legalization, regulation and control of all drugs, thereby doing away with the violent criminal market as well as a major source of funding for international terrorism?" continued the retired officer, a member of the group Law Enforcement Against Prohibition.

The president said the United States has to "go after drug cartels that are not only selling drugs but also creating havoc" at places like the U.S.-Mexico border.

In September of last year, Gil Kerlikowske, Mr. Obama's national drug control policy told CBS Radio News that it is a "false argument" to say marijuana legalization would reduce cartel violence in Mexico. Kerlikowske, a former police chief and undercover narcotics detective, said, "Taking one small part of the (cartel) enterprise, marijuana away from them isn't going to change them."

Mr. Obama said today, however, that focusing the United States' drug policy on arrests, incarceration and interdiction has not had ideal results. Instead, he said, there should be more focus on decreasing demand for drugs, by treating them as other public health concerns like smoking or drunk driving.

"Typically, we've made huge strides over the last 20 to 30 years by changing people's attitudes" on those issues, he said.

The same is not true for illegal drugs. The annual National Survey on Drug Use and Health released last year showed that the rate of illicit drug use rose from 8 percent in 2008 to 8.7 percent in 2009.

Mr. Obama said today that more resources could go towards drug rehabilitation so that those looking for help from a drug treatment program do not have to wait for months for assistance. He also said there should be a way of steering nonviolent, first-time drug offenders "into the straight and narrow."

"These are all issues that are worth exploring and worth a serious debate," he said.

In May of last year, the administration released a new drug control strategy that set up five-year goals for reducing drug use and the problems associated with it. The strategy included putting more resources into drug prevention and treatment and taking a multi-faceted approach to combating drug use.