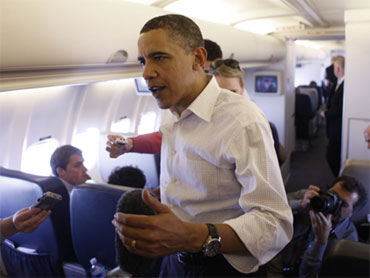 President Barack Obama said Wednesday that there "may not be an appetite" in Congress to deal with immigration immediately after going through a tough legislative year.

With energy legislation on the table and midterm elections approaching, Obama said he didn't want to force an immigration bill through Congress "just for the sake of politics." Still, he said discussions on the issue must move forward in a way that can garner the support of the American people.

"We've gone through a very tough year and I've been working Congress very hard, so I know there may not be an appetite immediately to dive into another controversial issue," the president told reporters aboard Air Force One returning with him to Washington from a Midwest trip.

The issue of immigration bubbled to the surface in recent weeks after Arizona Gov. Jan Brewer signed a controversial bill into law requiring local and state law enforcement to question people about their immigration status if there's reason to suspect they're in the country illegally. The law also makes it a state crime to be in the U.S. illegally.

Obama has sharply criticized the law, asking the Justice Department to look into whether it violates civil rights. On Wednesday, he said he understands the frustrations of people in Arizona who are faced with thousands of immigrants coming into their state illegally, but he said the state's new immigration law would only end up polarizing the debate over reform.

"What I think is a mistake is when we start having local law enforcement officials given the power to stop people on the suspicions that they may be undocumented workers," Obama told reporters. "That carries a great amount of risk."

The president said that while he believed he could get a majority of Democrats to support immigration reform, he still needs help from Republicans.

Senate Majority Leader Harry Reid had talked about moving immigration ahead of climate change legislation, a suggestion that splintered bipartisan support for the climate bill. Then Reid said Tuesday he was willing to bring up climate change legislation ahead of an immigration bill, but Republican Sen. Lindsey Graham, R-S.C., was still angry that Reid considered putting off the climate bill.

Reid said the long-delayed climate bill "is much further down the road in terms of a product" than the immigration measure, which remains unwritten.

An immigration proposal by three Democratic senators calls for more federal enforcement agents and other border security-tightening benchmarks before illegal immigrants could become legal U.S. residents, according to a draft of the legislation obtained Wednesday by The Associated Press. The bill is being developed by Reid of Nevada, Chuck Schumer of New York and Robert Menendez of New Jersey.

But the proposal is running up against the reality of this summer's packed legislative calendar, which includes financial reform and Supreme Court confirmation hearings, reports CBS News Congressional correspondent Nancy Cordes.

More coverage of the immigration debate:

Will Other States Follow Arizona's Lead on Immigration?
Washington Unplugged: The Politics of the Immigration Fight
How Arizona Became Center of Immigration Debate