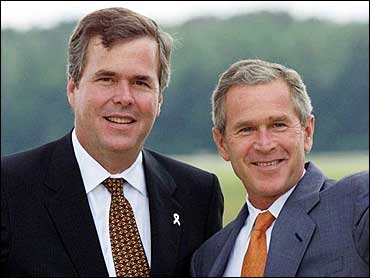 The controversial immigration bill signed into law in Arizona Friday is exposing a rift in the Republican party over how it addresses issues important to Latinos, a fast-growing voting bloc overwhelmingly opposed to the GOP-backed bill.

Bush (pictured with his brother George W. Bush) told Politico that the bill "creates unintended consequences." He added: "It's difficult for me to imagine how you're going to enforce this law. It places a significant burden on local law enforcement and you have civil liberties issues that are significant as well."

Rubio, meanwhile, used similar language, saying "aspects of the law, especially that dealing with 'reasonable suspicion,' are going to put our law enforcement officers in an incredibly difficult position."

"It could also unreasonably single out people who are here legally, including many American citizens," he added.

Republican Sen. Lindsey Graham of South Carolina, meanwhile, suggested the law is unconstitutional, though he said it reflects "what good people will do" when they are left without better options.

Among those defending the bill are Republican lawmakers in Arizona, among them Gov. Jan Brewer and Sen. John McCain, both of whom are facing election battles this year. If Brewer hadn't signed the legislation, she would have exposed herself to criticism from the right that she is soft on immigration.

McCain, for his part, is facing a challenge from the right from former congressman and talk show host J.D. Hayworth. McCain was once a strong backer of comprehensive immigration reform that included a so-called "path to citizenship" for illegal immigrants, a position Hayworth has aggressively criticized.

McCain elected to support the bill signed into law by Brewer. Given the chance to repudiate it on CBS' "The Early Show" Tuesday, McCain declined, instead casting the bill as "a response to the president's and the administration's failure to secure our borders." He added that law enforcement officials believe they can implement the law without racial profiling.

Many Republicans seem unsure how to approach the new law. House Minority Leader John Boehner did not exactly endorse the legislation in comments Tuesday, though he didn't reject it either: He said the state has a right to pass its own laws and that "it has a 70 percent approval in Arizona and I think we ought to respect the people of Arizona and everyone should make their own decisions."

Indeed, the legislation puts members of the GOP in a difficult position: They don't want to turn off those members of their base who want them to take a strong position on illegal immigration, but they also fear the long-term repercussions of alienating Latino voters. In 2007, President George W. Bush's push for comprehensive immigration reform (centered on a "guest-worker program") was rejected by the Senate amid concerns from within the party that the bill amounted to amnesty for illegal immigrants.

The Arizona law, which would go into effect in July, includes in its provisions a requirement for law enforcement officers to question a person about his or her immigration status if there is "reasonable suspicion" that person may be illegally in the country. Attorney General Eric Holder indicated today that he believes "the law is an unfortunate one that will be subject to potential abuse" and said that the Justice Department is "considering a court challenge."