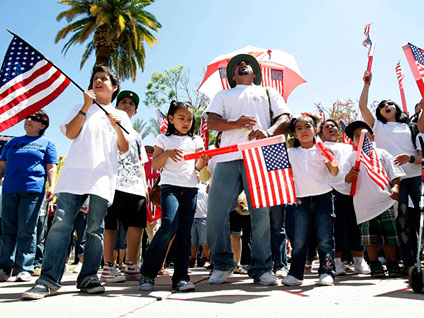 Most Americans think the issue of illegal immigration is a serious one, according to a CBS News/New York Times Poll conducted earlier this month. That view has changed little over the past few years.

Still, the poll finds that addressing immigration is not a top priority for Americans. Issues like the economy and jobs, health care, and the budget deficit rank higher in importance.

Polling was conducted before Arizona Gov. Jan Brewer signed an immigration bill into law that requires police officers in that state to question a person about their immigration status if they appear to be in the U.S. illegally.

Eighty-three percent of Americans say the issue of illegal immigration in the United States is serious, including six in 10 who describe it as very serious. Public opinion on this question is similar to what it was in during the 2008 presidential campaign as well in 2006, when immigration legislation was last seriously debated in Congress.

Geography matters as well. More than six in 10 Americans living in the South (69 percent) and West (65 percent) say illegal immigration is a very serious problem for the country; while fewer think that in the Midwest (51 percent) and Northeast (49 percent). Among Americans living in the states along the southern border of the United States, 69 percent think the issue of illegal immigration is very serious.

Younger Americans are also less likely to be concerned about illegal immigration than those who are older.

Americans express serious concern about immigration when they are asked directly about it, but in an open-ended question, only 1 percent volunteer immigration as the most important problem facing the country. The economy and jobs remain front and center in people's minds - 49 percent volunteer that as the nation's top problem.

Just two percent of Republicans and three percent of conservatives cite immigration as the nation's most important problem. Their chief concern, like most Americans overall, is the economy.

There are now indications that the Senate's Democratic leadership is shifting its focus from energy policy to immigration reform.

A CBS News/New York Times poll conducted at this time last year - about 100 days into Barack Obama's presidency - found 75 percent of Americans thought it likely that President Obama would make significant changes to U.S. energy policy during his first term. In that same poll, fewer (but still a majority of 59 percent) thought Mr. Obama would bring about significant immigration reform in his first term.

With the 14-month health care debate fresh in people's minds, are Americans (and Congress) ready for another marathon battle on a potentially contentious issue?

Jennifer De Pinto is manager of election and survey information for CBS News. Poll Positions is Hotsheet feature on polling analysis and trends from the CBS News Survey and Polling Unit. Click here for more posts from the series.