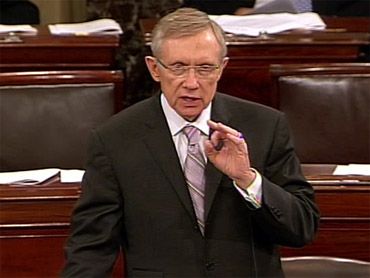 Senate Majority Leader Harry Reid said Tuesday he is willing to bring up climate change legislation ahead of an immigration bill, the first step toward resolving a dispute with Senate Republicans that threatened to derail a bipartisan effort months in the making.

Reid said the long-delayed climate bill "is much further down the road in terms of a product" than the immigration measure, which remains unwritten.

"The energy bill is ready. We will move to that more quickly than a bill we don't have," Reid, D-Nev., told reporters. "I don't have an immigration bill."

Reid's comments were intended to help resolve a dispute that emerged last weekend when Sen. Lindsey Graham, R-S.C., threatened to withhold support for the climate bill if Reid pushes ahead first with an immigration bill.

Kerry said Tuesday he was working with Reid, Graham and others to revive the bill, which he, Graham and Connecticut independent Sen. Joe Lieberman have been developing for more than six months. The bill also has the support of the Obama administration and a variety of business and environmental groups.

"We're not stopping, not one moment. We're meeting, we're talking, we're continuing to work at certain issues," Kerry told reporters. "So we're full-speed ahead, folks, notwithstanding this moment of public stall, and we hope the issue can be resolved soon."

Graham said over the weekend that he is angry at Reid for considering a plan to move an immigration reform bill ahead of the climate measure. He called Reid's idea a "cynical political ploy" that would destroy bipartisan efforts to move forward on climate and immigration.

Legislation to overhaul immigration laws and grant legal status to millions of long-term immigrants unlawfully in the country could create problems for Republicans in the midterm elections. The bill is a top priority for Hispanic voters - and most Republicans are opposed.

Pushing immigration ahead of climate legislation would have risked angering environmentalists, who see the Kerry-Graham-Lieberman bill as their best chance in years to address global warming.

Hispanics voted heavily Democratic in 2008, and they've been disappointed with President Barack Obama and congressional Democrats for not following up on campaign promises to reform immigration laws.

Reid is up for re-election this year and trailing in polls in Nevada, where Latinos are an important constituency. With Democrats facing a tough political climate in the midterm elections, energized Hispanic voters could make a difference in several states.

"Immigration and energy are equally vital to our economic and national security and we've ignored both of them for far too long," Reid said Tuesday. "I'm committed to doing both this session of Congress."