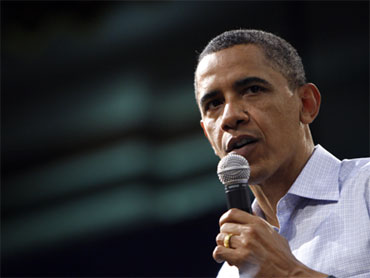 "You know, you can try to make it really tough on people who look like they, quote, might be illegal immigrants," he said.

The president added that a Hispanic American whose family had been in the United States for generations faced a situation in which "now suddenly if you don't have your papers and you took your kid out to get ice cream, you can be harassed, that's something that could potentially happen."

"That's not the right way to go," the president said, calling the law "poorly conceived."

The president had previously criticized the law as "misguided."

At the town hall meeting, Mr. Obama said that Republicans must join Democrats in working to pass comprehensive immigration reform. He said the fact that the issue was so fraught meant that a bipartisan approach was essential.

"The only way it's going to happen if Democrats and Republicans come together and do this because this is such a volatile issue," he said. "I will bring the majority of Democrats to the table, but we have to have help from the other side."

Republican Jeb Bush, who supports reform at the national level, became the first from his party to speak out against the Arizona law Tuesday. In an interview with Politico, the former Florida governor said the state has the wrong approach.

"It's difficult for me to imagine how you're going to enforce this law. It places a significant burden on local law enforcement and you have civil liberties issues that are significant as well," he said in the interview.

He said his administration had already made progress on securing the borders and that more should be done, and that that there should be more punishment for employers who hire illegal workers.

The president added that he supported a pathway to citizenship for illegal immigrants, but that they should be made to learn English, pay a fine and "get in the back of the line" when it comes to attaining legal status.

The Arizona law, which would go into effect in July, includes in its provisions a requirement for law enforcement officers to question a person about his or her immigration status if there is "reasonable suspicion" that person may be illegally in the country.

Attorney General Eric Holder indicated today that he believes "the law is an unfortunate one that will be subject to potential abuse" and said that the Justice Department is "considering a court challenge."