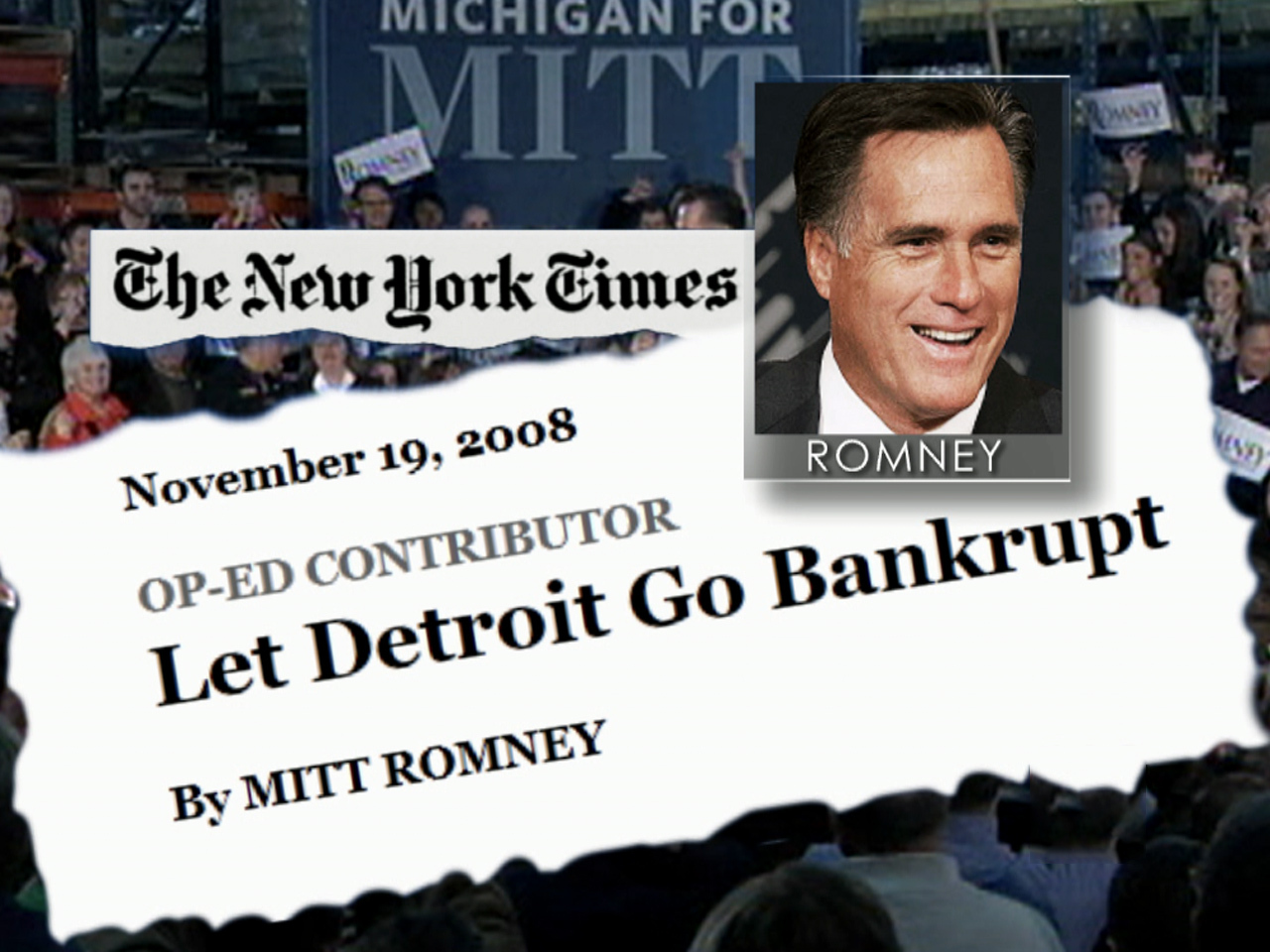 The Obama campaign on Monday afternoon released an ad rebutting Mitt Romney's claim - which he has stated both on the stump and in advertising - that because of the Obama administration, production of Jeeps is moving to China.

The new Obama ad, "Collapse," will air in the crucial swing state of Ohio, where one in eight jobs are tied to the auto industry. It opens by spotlighting a Romney op-ed headlined "Let Detroit Go Bankrupt" to claim that Romney "turned his back" on the auto industry at a crucial time.

This is not entirely fair: Romney did not actually use that phrase - it was the headline placed on an op-ed he wrote- and Mr. Obama's administration took GM and Chrysler through a "managed bankruptcy," which is what Romney advocated in the column. The difference is that while Mr. Obama used federal funds to help the industry, Romney advocated providing federal loan guarantees to banks that loaned Detroit the necessary money. Administration officials say those loans would never have come due to the financial crisis, and that Romney's position would have thus meant the end of the industry.

The narrator in the Obama ad goes on to say that "now, after Romney's false claim of Jeep outsourcing to China, Chrysler itself has refuted Romney's lie."

On Thursday, Romney said, "I saw a story today that one of the great manufacturers in this state Jeep -- now owned by the Italians -- is thinking of moving all production to China. I will fight for every good job in America. I'm going to fight to make sure trade is fair, and if it's fair America will win."

Chrysler called that claim"a leap that would be difficult even for professional circus acrobats."

"Jeep has no intention of shifting production of its Jeep models out of North America to China," said a spokesman. "It's simply reviewing the opportunities to return Jeep output to China for the world's largest auto market. U.S. Jeep assembly lines will continue to stay in operation."

Yet the Romney campaign is continuing to suggest Jeep jobs moving overseas: In a new campaign ad, a narrator says, "Obama took GM and Chrysler into bankruptcy and sold Chrysler to Italians who are going to build Jeeps in China." This is technically true, but it's misleading: Chrysler is considering building Jeeps in China for the Chinese market, but it has not indicated it will move American Jeep jobs overseas. The company has a Jeep production facility in Toledo, Ohio.

The Obama ad goes on to say the truth is that Jeep is adding Ohio jobs before deeming Romney "wrong" on the auto bailout and "dishonest now." It shows Romney saying "Let Detroit Go Bankrupt" on CBS News in 2011 in the context of a discussion of the controversial op-ed mentioned above.

UPDATE: Amanda Henneberg of the Romney campaign emailed a response to the ad.

"It appears the Obama campaign is less concerned with engaging in a meaningful conversation about President Obama's failed policies and more concerned with arguing against facts about their record they dislike," she said. "The American people will see their desperate arguments for what they are."