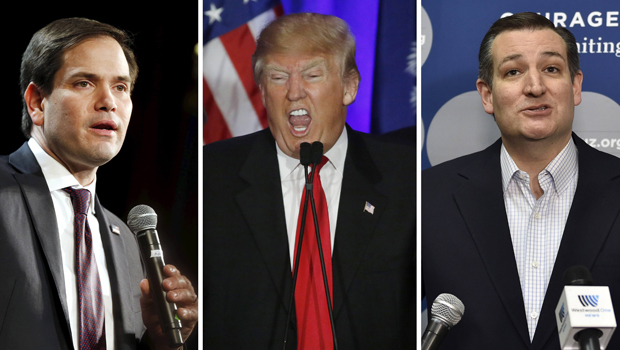 The New York Times editorial board assailed Donald Trump and the Republican Party in a searing editorial published on Super Tuesday.

"The Republicans seem to be reeling, unable or unwilling to comprehend that a shady, bombastic liar is hardening the image of their party as a symbol of intolerance and division," the editorial said.

It goes on to say that the GOP stood aside and said that voters should determine its party's nominee.

"Now voters are deciding," they said. "They are leaning, in unbelievable numbers, toward a man whose quest for the presidency revolves around targeting religious and racial minorities and people with disabilities, who flirts with white supremacists and the Ku Klux Klan, who ridicules and slanders those who disagree with him."

Pointing to recent personal attacks traded between Trump and Marco Rubio, the editorial board said that it demonstrates how much the billionaire businessman has influenced the tone of the race. Rubio and Ted Cruz, they said, are also "embracing the same game of exclusion, bigotry and character assassination."

The Times' editorial board said Republicans had opportunities to stop this early on, but suggested GOP officials didn't try hard enough.

"Possessed of a crack team of researchers, the Republican Party did not turn its resources on investigating this man's record of falsehoods and business failures," they said.

The board said Trump's "foul statements" and "shallow ideas" should be exposed through analyses and debates.

"Republicans are reaping the whirlwind right now, and Democrats should seize the chance to show Americans an alternative to Mr. Trump's politics of rage, and an image of themselves to be proud of, not shrink from," they said.