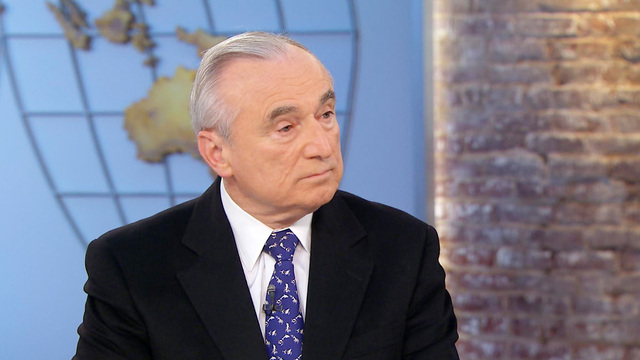 In a display of protest Sunday, dozens of police officers turned their backs to New York City Mayor Bill de Blasio, who was at the hospital where NYPD officers Rafael Ramos and Wenjian Liu died. Since then, tensions between the mayor and NYC's police union has risen.

"We're in a difficult place, in terms of the officers' feelings, about the demonstrations, about the anti-police move that seems to be sweeping the country of late. It's not easy being a cop in America today," NYPD commissioner Bill Bratton said Tuesday on "CBS This Morning."

"Despite crime having gone down fairly dramatically over the last 20 years, it's a tough job," Bratton said.

While the nation has witnessed growing anti-police rhetoric, Bratton commended the New York City police for keeping crime down and staying strong in the face of demonstrators, some of whom use "kill-the-cops" language.

"I'm privileged to lead an extraordinarily professional group of men and women who are committed to their profession," Bratton said.

Since the shooting deaths of the two NYPD officers, Bratton has taken significant precautions for the men and women on his force. He's suspended patrols by auxiliary officers, established teams of detectives to work in threes and encouraged academy trainees not to wear their uniforms in public.

"We're constantly adjusting our threat levels. A couple weeks ago, because of the lone-wolf threats (and) potential terrorism acts, we raised them up," Bratton said.

He said any strengthening of precautions is adjusted accordingly to those types of threats. In this case, until his department can ensure the gunman Ismaaiyl Brinsley acted alone, those measures will remain.

"But an awful lot of copycat threats have come in in the meantime. We have to check every one of those out. It's an abundance of caution at this time," Bratton said.

One issue that has risen from this tragedy, as with many others, is the difficulties of implementing policies to prevent people with mental disease from harming the public. Bratton said the NYPD is working to police that.

"We have a very capable police department, NYPD, almost 1,000 of counterterrorism and intelligence very skilled in viewing social media, tracing back to photos, etc. And what we are attempting to do is follow up on every one of those threats," Bratton said.

In this latest case, Bratton said they're trying to build a profile of Brinsley.

"Where did he get his money? Who does he hang out with? Doesn't seem to have been employed?" Bratton said. "He doesn't seem to have a residence; he just crashes on somebody's couch. But he seems to have money. Cashing $100 bills. So we're checking very closely his relationships...What was his world like?"

In addition, the NYPD continues to prepare for upcoming events like New Years Eve in Times Square, where hundreds of thousands are expected to watch the ball drop. Bratton said particularly since the attacks on 9/11, his department has applied secure measures to ensure their safety.

"As we go into New Year's week, after we finish with the funerals coming up in the next week, the focus will shift very clearly to that event. We plan for all year long in terms of intelligence gathering," Bratton said. "There are no credible threats directly against that event as of this time and we've pretty much perfected over the last number of years to deal with that area."