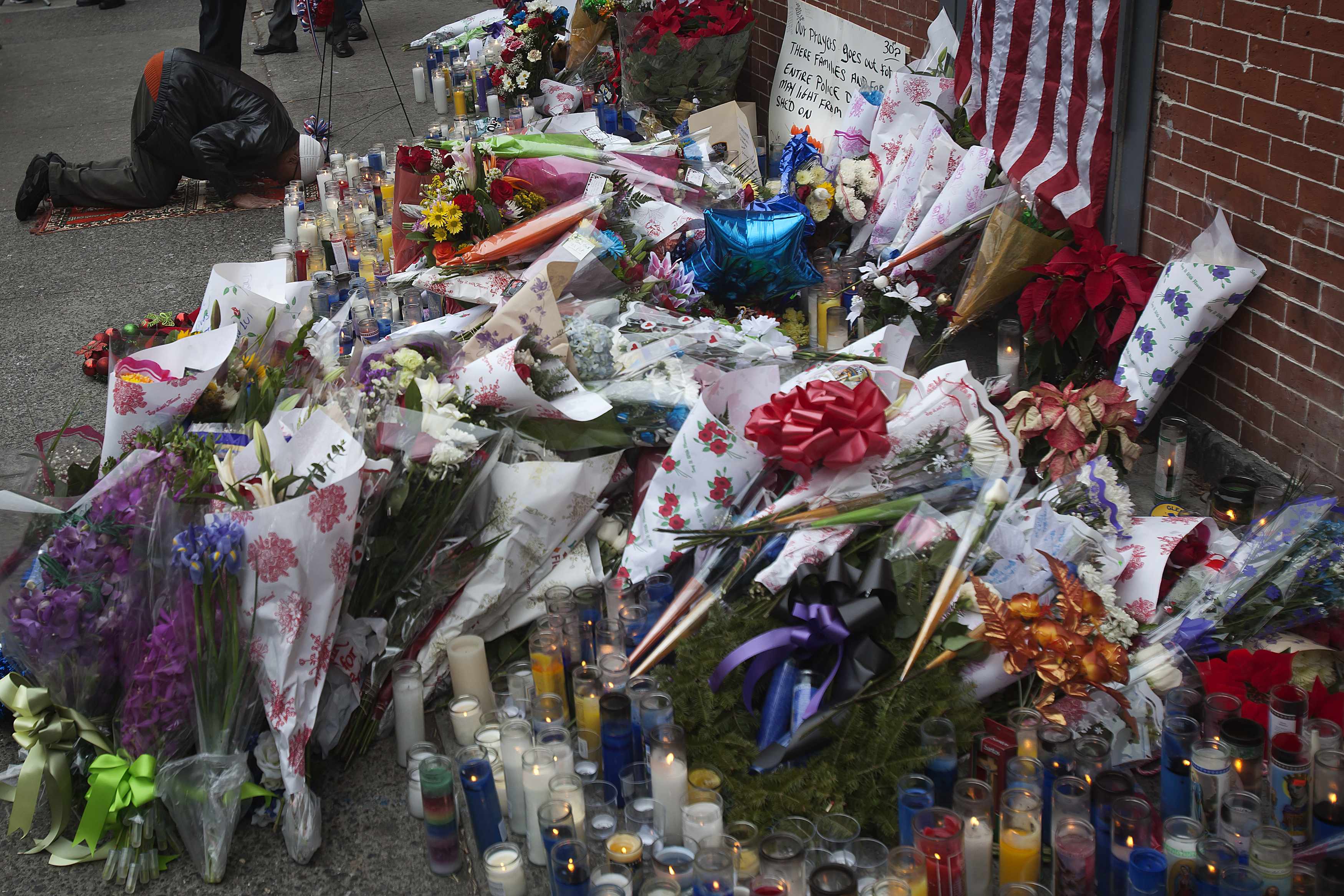 NEW YORK -- Leaders of protests against police tactics in dealing with African-Americans say they plan to defy calls from New York Mayor Bill de Blasio for a pause in demonstrations until the two officers ambushed and slain Saturday are laid to rest.

De Blasio's calls came amid a widening rift with those in a grieving police force who accuse him of creating a climate of mistrust that contributed to the killings of the two officers.

De Blasio called Monday for a halt of political statements until after the funerals of the slain officers, an appeal to both sides in a roiling dispute centered on the deaths of unarmed black men at the hands of white police officers.

"We are in a very difficult moment. Our focus has to be on these families," de Blasio said at police headquarters, referring to the families of the two slain police officers. "I think it's a time for everyone to put aside political debates, put aside protests, put aside all of the things that we will talk about in all due time."

But the Rev. Al Sharpton, a close de Blasio ally, and other protest leaders said Monday that they would not heed the mayor's call to suspend demonstrations.

Some protest organizers are criticizing the city for trying to stifle free speech by calling for the protest moratorium until after the funerals, reports CBS New York.

Officers Wenjian Liu and Rafael Ramos were ambushed Saturday afternoon by a 28-year-old who vowed in an Instagram post that he would put "wings on pigs." The suspect, Ismaaiyl Brinsley, was black; the slain officers were Hispanic and Asian.

Liu's widow spoke to reporters Monday. Walking slowly down the steps of her Brooklyn home, Pei Xia Chen then gathered herself, and spoke of the husband she married just two months ago. "This is a difficult time for both of our families, but we will stand together and get through this together," she said. She also thanked the community for it's support.

De Blasio's relations with the city's police unions have tumbled to an extraordinary new low in the aftermath of Saturday's shooting - an ambush the gunman claimed was retaliation for the police-involved deaths of Eric Garner in New York and Michael Brown in Ferguson, Missouri.

In a display of defiance, dozens of police officers turned their backs to de Blasio as the mayor walked through the hospital where the officers died, and union leaders said the mayor had "blood on his hands" for enabling the protesters who have swept the streets of New York this month since a grand jury declined to indict an officer in Garner's chokehold death.

De Blasio, though he said he did not agree with the union leaders' comments, largely tried to strike a unifying note in his first extensive question-and-answer session since the shooting. He said he was confident the city was "working toward a day where we can achieve greater harmony toward policing and community."

There's been talk of a police slowdown as a show of anger, but Commissioner William Bratton says he's not seeing that, according to CBS New York.

The mayor also spoke once more about "protecting those who protect us," urging anyone who spots a threat to cops on social media to report it, CBS New York says.

The station reports a makeshift memorial at the site of the shootings continued to grow Monday, as tributes to the slain officers poured in from across the country.

The killings came as police across the U.S. are being criticized following Garner's death and the shooting death of the 18-year-old Brown. Both Garner and Brown were unarmed. Protests erupted after grand juries declined to charge officers in either case.

On Monday, a prosecutor said a white Milwaukee police officer who was fired after he fatally shot a mentally ill black man in April won't face criminal charges. The brother of the slain man, though clearly angry, urged protesters to remain peaceful.

"There's a lot of pain. It's so hard to make sense of it - how one deeply troubled, violent individual could do this to these good families," a somber de Blasio said. "And I think it's a time for everyone to take stock that there are things that unite us, there are things that we hold dear as New Yorkers, as Americans."

Investigators continued to depict Brinsley as an emotionally troubled loner. He had an extensive criminal record and was involved in a 2011 standoff with police in Georgia that ended with officers using a stun gun on him, according to records.

Police are trying to determine Brinsley's whereabouts in the two hours he was in New York before killing the officers. Surveillance video shows Brinsley holding a foam food container that investigators believe held the gun he used. After the shooting, he then ran into a nearby subway station and killed himself.

Police said Brinsley was a bystander during a protest in Manhattan's Union Square two days before the Garner grand jury decision but had not participated. It remained unclear if Brinsley simply latched onto the cause at the end of a violent rampage that began Saturday morning in Baltimore when he shot his ex-girlfriend in the stomach. The woman said Brinsley had first held the gun to his own head but she talked him down, authorities said.

The police unions - who even before the weekend shooting had circulated a petition to ban the mayor from attending police funerals - blame de Blasio for fostering anti-police sentiment.

Sergeants Benevolent Associations head Edward Mullins refused to back down from that stance, saying that "the mayor has turned his back on us - he got elected on his campaign of attacking the police all along."

Bratton said representatives from the five unions had agreed to stand down until after the funerals, but he also downplayed their tensions with de Blasio.

"Can you point out to me one mayor who has not been battling with police unions in the last 50 years? Name one," he said to reporters at the police headquarters news conference. "The experience of this mayor of some cops not liking him, it's nothing new."

But some pundits say the level of animosity between the unions and de Blasio had reached a critical point.

De Blasio said he would be willing to meet with the union leaders but also angrily suggested that their ire was, in part, fanned by what called media exaggeration of anti-NYPD sentiment among protesters.

Bratton said a viewing for Ramos would be held on Friday at a Queens church, followed by a funeral service the next day. Officials are working to obtain travel documents for some of Liu's family in China; a funeral will be scheduled after they arrive in the United States.

De Blasio said he would attend both funerals.