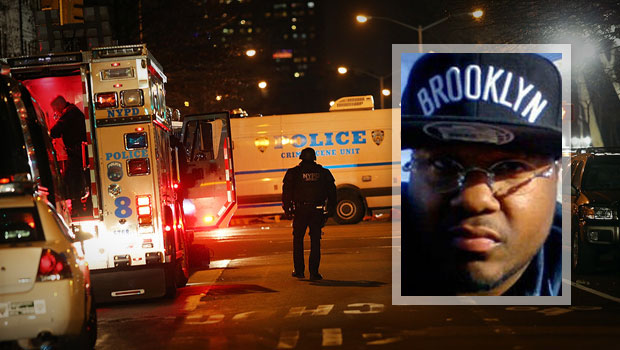 NEW YORK - When New York City police officers Wenjian Liu and Rafael Ramos were fatally shot in their patrol car in Brooklyn Saturday they joined a small fraternity of law enforcement officers who are the victims of homicide in the line of duty each year.

In 2013, 76 police officers were killed in the line of duty in the United States, according to the Federal Bureau of Investigation's annual report on the subject. Twenty-seven police officers were victims of homicide, including five who, like Liu and Ramos, died in ambush situations.

More than half of the officers killed died accidentally, including 23 in automobile accidents.

Ismaaiyl Brinsley, the man police believe shot his ex-girlfriend in Maryland then killed officers Liu and Ramos in New York, shares several characteristics with other people accused of killing police, including gender, age, and criminal history. According to the FBI, in 2013, 16 of the 28 offenders accused of killing police were males between the ages of 18 and 30; Brinsley was 28. The Bureau also says twenty of those who killed officers in 2013 had been previously arrested; the NYPD says Brinsley had been arrested at least 19 times in Georgia and Ohio.

The FBI data also show that two of the 28 people accused of killing police officers in 2013 were known to have mental health problems. According to the New York Times, police say that Brinsley once tried to hang himself and told a court in 2011 that he had been under psychiatric care.

FBI numbers show that of the 565 people accused of murdering police officers since 2004, 289 have been white and 243 have been black.

According to research by the Johns Hopkins Bloomberg School of Public Health, 93 percent of law enforcement homicides between 1996-2010 were committed using guns; two-thirds of those were handguns. Of the 27 officers slain in 2013, 18 were killed with handguns - like the 9 millimeter Taurus that Brinsley reportedly used.

According to the Los Angeles Times, the handgun Brinsley used in the two Brooklyn police homicides was purchased in 1996 at a pawn shop in Atlanta. How and when it fell into Brinsley's hands is still under investigation.

Dr. Cassandra Kercher Crifasi, who conducted the Johns Hopkins study, told 48 Hours' Crimesider that there are no data on how many of the guns used to kill police officers were obtained legally or illegally, because many states do not require background checks that would allow researchers to trace ownership of a particular weapon.

According to Dr. Daniel Webster, director of the Johns Hopkins Center for Gun Policy and Research, Brinsley's criminal history would have prohibited him from legally obtaining a firearm. But Georgia, he says, "lacks what I consider to be the minimum standards for preventing diversions of guns to prohibited owners."

Specifically, Webster points to the fact that under Georgia law, whoever purchased the gun in 1996 would have little or no obligation to check whether the person he or she transferred it to was legally prohibited from owning a firearm.