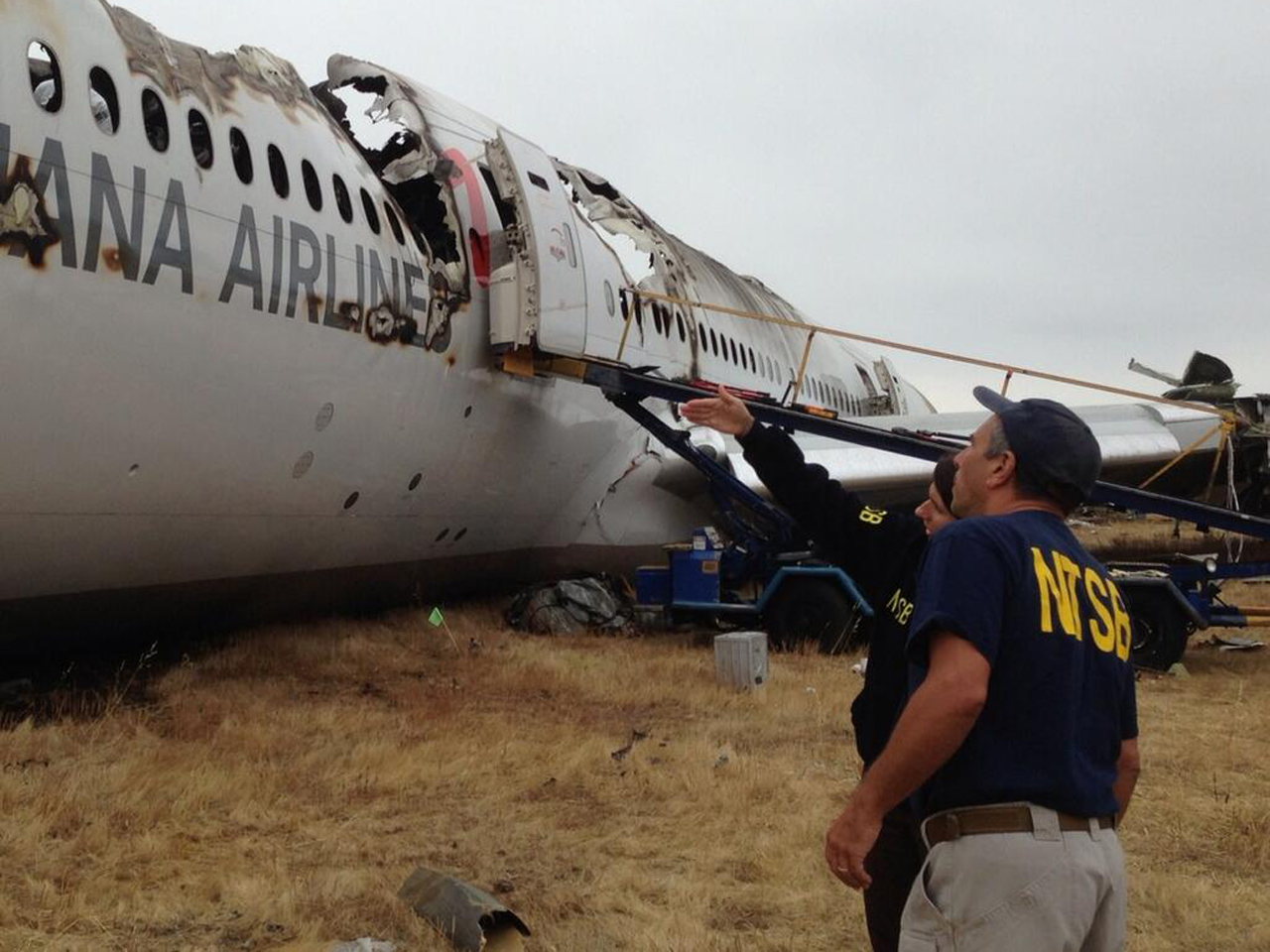 SAN FRANCISCO The pilots involved in the Asiana Airlines flight 214 crash in San Francisco told federal investigators that they set the automatic throttle controls on the plane for a proper landing speed and then discovered to their surprise that at the last moment, the plane had slowed far beyond that setting.

The crash killed two of the 307 people and injured scores of others, most not seriously. Among those injured were two flight attendants in the back of the plane, who survived despite being thrown onto the runway when the plane slammed into the seawall and the tail broke off.

In an afternoon press conference on Tuesday, National Transportation Safety Board Chairman Deborah Hersman spoke of the four pilots on board the plane and what they were doing leading up to the crash. Three of them were on the flight deck at the time of the landing.

Of the supervising pilot on the flight deck, Hersman said:"He reported that this was his first trip as an instructor pilot. This was the first time that he and the flying pilot that he was instructing had flown together."

As CBS News correspondent John Blackstone said teams of NTSB investigators are examining the plane inside and out to find and record every piece of debris -- from landing gear ripped from the jet to the smallest piece of fuselage.

The cockpit could hold clues to verify the statements given by the pilots. The pilot in control of the plane was sitting in the left-hand seat. It was his first landing at San Francisco in a Boeing 777.

He was being trained by the captain sitting in the right-hand seat. The senior pilot had 3,000 hours flying experience in a 777. But the airline says he was certified as a trainer just last month.

The supervising pilot typically is responsible for taking control of the plane if something should go wrong.

"At about 500 feet," said Hersman, "he realized that they were low. He told the pilot to pull back."

The flight data recorder indicates the plane was traveling 40 mph slower than it should have been for landing -- so slow it triggered a warning system that shook the flight controls in the pilots' hands -- an alert the plane was losing lift and about to stall.

Just 1.5 seconds before the crash, the pilot attempted to abort the landing. The engine started speeding up, but it was too late to get them to full power.

In the interviews, the pilots said that they had set the auto throttle at 137 knots. That's the typical landing speed for the 777. What the NTSB has to confirm now is whether or not those controls were working.

Autothrottles typically have three settings — off, on and armed. An autothrottle that is armed but not on will remain at its previous speed, which was probably near idle, said Doug Moss, a pilot for a major U.S. airline and an aviation safety consultant in Torrance, Calif. Pilots will frequently shift to idle off and on when preparing to land in order to descend faster.

In most airliners, an autothrottle will not turn on if one flight director is off and one on because it has to work in harmony with the flight directors — both need to be either on or off, Moss said.

Only moments before the crash did the training captain realize the autothrottle wasn't controlling the plane's speed, Hersman said.

"This is one of the two hallmarks of complexity and challenge in the industry right now," Moss said. "It's automation confusion because from what Deborah Hersman said, it appears very likely the pilots were confused as to what autothrottle and pitch mode the airplane was in. It's very likely they believed the autothrottles were on when in fact they were only armed."

Their last second efforts to rev the plane back up and abort the landing failed, although numerous survivors report hearing the engines roar just before impact.

"We just seemed to be flying in way too low. Last couple seconds before it happened the engines really revved into high gear. Just waaah! Like the captain was saying `oh no, we gotta get out of here.' And then, boom! The back end just lifted up, just really jolted everybody in their seats," said crash survivor Elliot Stone, who owns a martial arts studio in Scotts Valley.

While in the U.S., drug and alcohol tests are standard procedure after air accidents, this is not required for foreign pilots and Hersman said the Asiana pilots had not undergone any testing.

There's been no indication, from verbal calls or mechanical issues, that an emergency was ever declared by pilots. Most airlines would require all four pilots to be present for the landing, the time when something is most likely to go wrong, experienced pilots said. In addition to the two pilots, a third was "monitoring" the landing from a jumpseat, while a fourth was in the rear of the cabin.

"If there are four pilots there, even if you are sitting on a jump seat, that's something you watch — the airspeed and the descent profile," said John Cox, a former US Airways pilot and former Air Line Pilots Association accident investigator.

By Tuesday afternoon, NTSB interviews with three pilots were complete and the fourth was underway.

In addition, authorities were reviewing the initial rescue efforts after fire officials acknowledged that one of their trucks might have run over one of the two Chinese teenagers killed in the crash. The students, Wang Linjia and Ye Mengyuan, were part of a larger group headed for a Christian summer camp with dozens of classmates.

Asiana President Yoon Young-doo arrived in San Francisco from South Korea on Tuesday morning, fighting his way through a pack of journalists outside customs.

He met with and apologized to injured passengers, family members and survivors. But Yoon said he can't meet with the Asiana pilots because no outside contact with them is allowed until the investigation is completed.

More than 180 people aboard the plane went to hospitals with injuries. But remarkably, more than a third didn't even require hospitalization.

The passengers included 141 Chinese, 77 South Koreans, 64 Americans, three Canadians, three Indians, one Japanese, one Vietnamese and one person from France.

The flight originated in Shanghai, China, and stopped over in Seoul, South Korea, before making the nearly 11-hour trip to San Francisco.