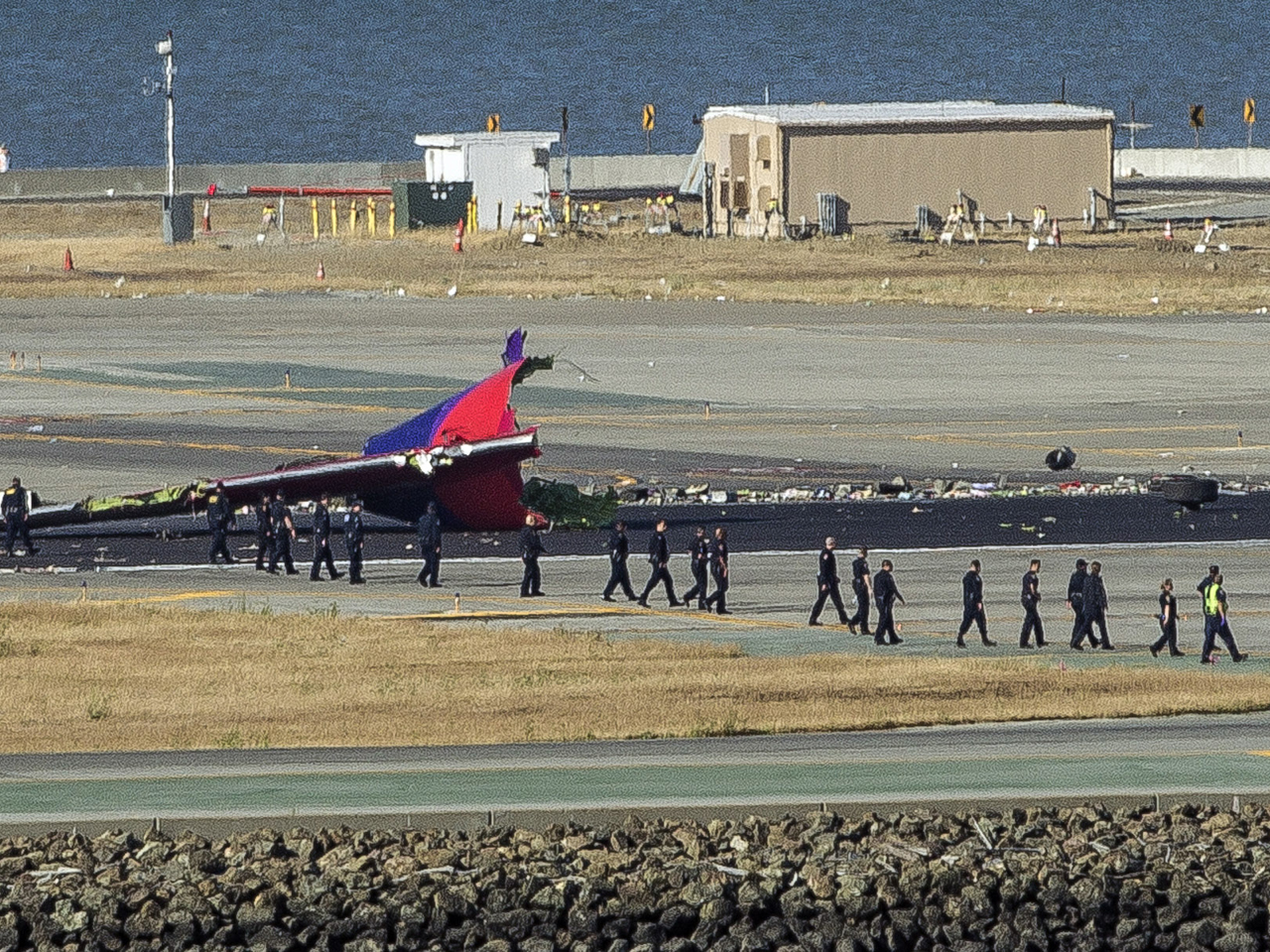 Asiana Airline Flight 214 was going too slowly and tried to abort landing in the moments before it crashed while landing at a San Francisco Airport Saturday, an NTSB official said Sunday.

National Transportation Safety Board Chairman Deborah Hersman recounted the last seconds in the cockpit leading up to the crash, which killed at least two and injured dozens of the 307 passengers and crew on board, at a press conference.

An Asiana Airlines spokeswoman also said Sunday that that the pilot at the controls has little experience flying that type of plane and was landing that particular model for the first time, lending another clue to what may have contributed to the crash.

Lee Hyomin told The Associated Press that Lee Gang-guk was trying to get used to the 777 plane during Saturday's crash landing. She said the pilot had nearly 10,000 hours flying other planes, but had only 43 hours on the 777.

While it may be some time before an official conclusion about the cause of the crash is released, there are already many clues about what may have went wrong. Among the evidence collected by officials in the aftermath of the crash is the plane's cockpit voice recorder, currently being analyzed in Washington, D.C.

Hersman said that according to the two-hour recording, the pilots did not discuss any aircraft anomalies as they approached the runway. Seven seconds leading up to the crash, there was a request for more speed. The preliminary investigation has found that the plane's approach speed was slower than the 137-knot target speed.

"We are not just talking about a few knots here or there," she said, adding that it was too early to speculate why the plane may have been going too slow.

At 1.5 seconds before the crash, there was a vocal request to initiate a "go-around," or aborted landing.

Before the plane made impact with the ground, Hersman said there was no audible signals of distress from the cockpit, nor any indication the plane was having problems.

In an interview with "Face The Nation" earlier Sunday, Hersman said an important system that helps planes land had been turned off at the San Francisco airport.

"What we do know is that there was a notice to airmen that indicated that the 'glide slope' was out," Hersman said. The glide slope had been out since June due to construction at the airport, she explained.

CBS News aviation and safety analyst Capt. Chesley Sullenberger told CBS affiliate KCBS in San Francisco the FAA-mandated construction is intended to increase the safety zone of the runway by moving it farther away from the seawall near where the plane crash landed.

A 2005 advisory issued by the FAA says "the goal is to construct an available runway length for new runways or extensions to existing runways that is suitable" for different kinds of airplane operations.

Even without the construction, officials say it is not unusual for the "glide slope" or "glide path" system to be turned off during good weather conditions.

Sullenberger told KCBS the system triggers "automatic warnings that would occur in the cockpit when you deviate below the desired electronic path."

Numerous eyewitnesses said the plane appeared to be coming in low before crashing.

"All of a sudden as he got right up to the runway, we just heard a really loud boom, and before we knew it, the plane had come to a stop about 50 yards down," Siadata said. "It was lost in a sea of smoke and black dust."

Crash survivor and San Francisco resident Benjamin Levy told reporters he flies into the airport often, and that he felt the plane was "too low, too soon" just before impact.

"He was going down pretty fast, and I think he just realized he was down too fast," Levy said, adding the pilot seemed to push hard on the engines "just as we were about to hit the water."

NTSB Chairman Hersman would not speculate on "Face the Nation" about whether or not the NTSB investigation has found the plane was too low. Hersman said it was possible, but would not blame the lack of a "glide slope" system for the problem. She said there are more "primitive" options than the "glide slope" system for pilots seeking landing assistance, like lights and on board GPS systems.

In a press conference Sunday, Asiana Airlines officials said it is unlikely that a mechanical failure caused the crash. The plane that crashed, a Boeing 777-200, has an excellent air safety record, something that would corroborate their claim.

After apologizing to victims and their families, the airline's president, Yoon Young-doo, defended the pilots of the plane as "skilled" veterans, saying three had logged more than 10,000 hours each of flight time, while the fourth had put in almost that much time. All four pilots are South Koreans.

Crash survivor Levy said "the crew was not expecting it at all," an account that other passengers have corroborated. Levy described the crew as "overwhelmed" by the "chaos" that erupted on board after the tail ripped off, adding that he and other passengers ended up escorting survivors off the plane to safety.

"In fact, the FAA classified it as a special airport, along with other airports worldwide that involve mountainous terrain or other special challenges," he said. "It is surrounded by water, and of course water is a featureless terrain where depth perception can sometimes difficult be. There are shifting winds, low visibilities, so there are several things that make it special, plus high terrain just past it."

"Everything is on the table right now" for explaining the crash, Hersman said.

Former NTSB Chairman and CBS News analyst Mark Rosenker warned against analyzing what went wrong so early in the investigation. However, he did credit the technology of the plane and first responders for acting quickly to minimize the number of casualties.

The large number of survivors had to do with the "structural integrity of the aircraft," Rosenger said. "(And) clearly when it finally stopped, the ability to get these people off, the training that the flight attendants actually displayed. Really, it was incredibly advantageous for us to watch these people get off the aircraft, and the first responders were there very quickly to prevent the fire."