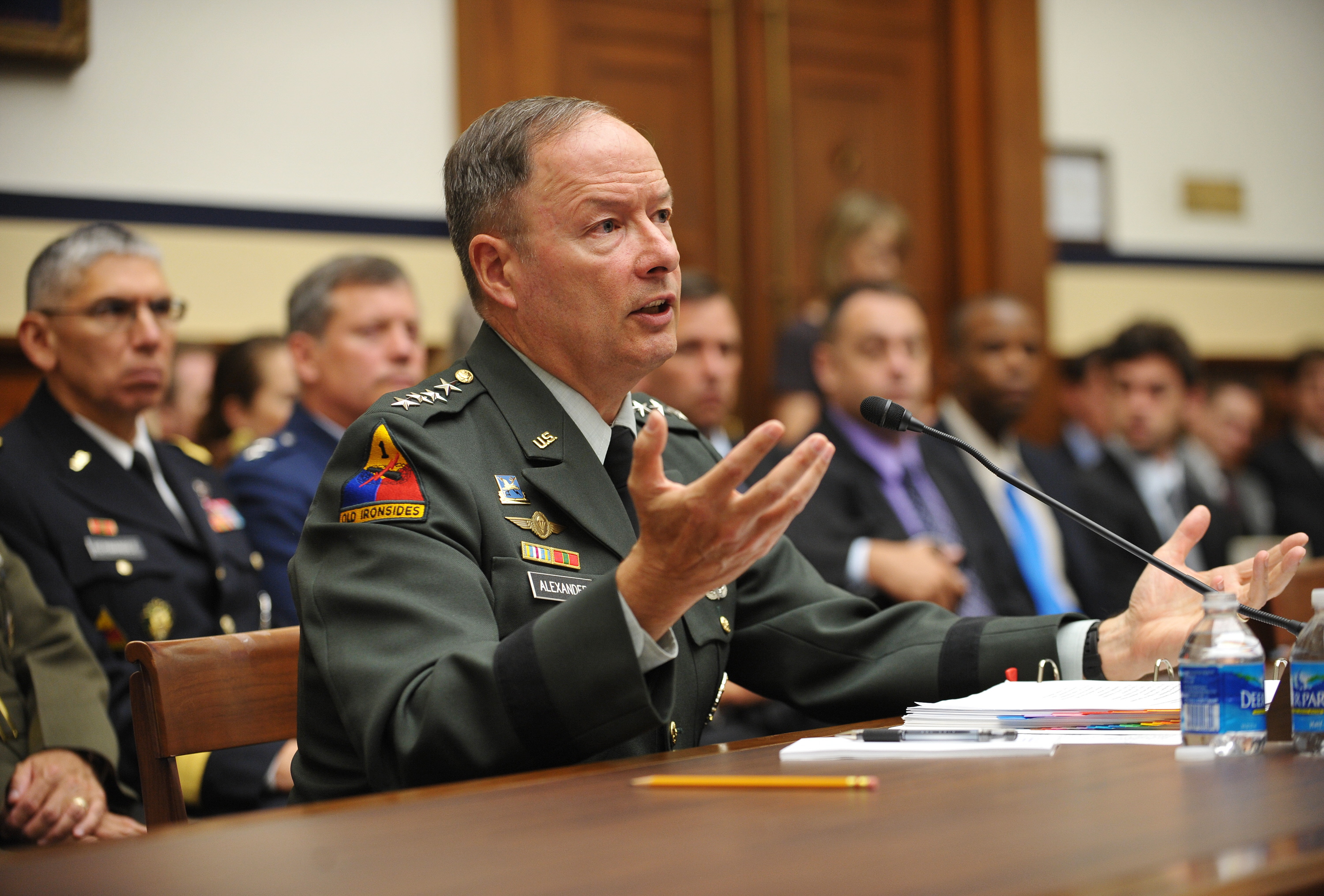 As pressure mounts for the intelligence community to curb its surveillance activities or at least make them more transparent, a key National Security Agency official will testify before the Senate Appropriations Committee on Wednesday.

Army Gen. Keith Alexander, National Security Agency director and head of U.S. Cyber Command, will testify before the full committee in a previously-scheduled session, marking the first time an NSA official will answer to Congress in public since news broke that the agency is collecting all of Verizon's U.S. phone records, as well as internet content from non-U.S. internet users abroad.

Intelligence officials have been holding closed-door briefings with members of Congress this week, getting them up to speed on the NSA's sweeping surveillance methods. After a Senate Intelligence Committee briefing on Wednesday, vice chairman of the committee Sen. Saxby Chambliss, R-Ga., called Alexander "very straightforward," adding he "always let's us know what's happening."

While intelligence officials and the Obama administration insist Congress has been fully briefed on the NSA's activities, some members of Congress have disputed that. When Attorney General Eric Holder testified before the Senate Appropriations Committee last week, Committee chairwoman Sen. Barbara Mikulski, D-Md., said, "This 'fully briefed' is something that drives us up the wall. 'Fully briefed' doesn't mean we know what's going on."

Sen. Ron Wyden, D-Ore., an advocate for more transparency, has specifically called out Director of National Intelligence James Clapper for telling Congress in March that the NSA does not collect data on Americans. The White House on Tuesday defended Clapper, even though Clapper himself has said he gave Congress "the most truthful, or least untruthful" response he could.

The revelations about the NSA programs has renewed challenges against the laws used to justify the programs, namely the Patriot Act and the 2008 FISA Amendments Act. The American Civil Liberties Union (ACLU) on Tuesday filed a lawsuit challenging the NSA's collection of Verizon records, calling it a violation of the organization's First and Fourth Amendment rights. Furthermore, the ACLU argues that the "business records" section of the Patriot Act doesn't give the agency the statutory authority for such sweeping surveillance.

The ACLU in its release Thursday made clear that this would not be a problem in this new lawsuit: "As an organization that advocates for and litigates to defend the civil liberties of society's most vulnerable, the staff at the ACLU naturally use the phone--a lot--to talk about sensitive and confidential topics with clients, legislators, whistleblowers, and ACLU members. And since the ACLU is a [Verizon] customer, we were immediately confronted with the harmful impact that such broad surveillance would have on our legal and advocacy work."

The ACLU had earlier filed a motion with the secretive Foreign Intelligence Surveillance Court, requesting it publish its opinions on the meaning, scope and constitutionality of the relevant parts of the Patriot Act.

After Tuesday's briefing with Alexander, Senate Intelligence Committee chairwoman Sen. Dianne Feinstein, D-Calif., said the committee asked Alexander to declassify some things associated with the surveillance programs so members of Congress can explain the value of the programs to the public.

"I think they're really helpful," she said. "And that's the problem , it's all classified... If we can get that declassified then we can speak much more clearly."

Sen. Marco Rubio, R-Fla., another member of the Intelligence Committee, said keeping information classified is "not about keeping things from people."

"Quite frankly, it's about keeping the integrity of this program, so that the enemy can't evade them or undermine them," he said. "That's always the concern with classification."

A newly-released CBS News poll shows that 53 percent of Americans think the government's collection of phone records is necessary to fight terrorism. Sixty percent do not think the public revelation of these programs has weakened the United States' ability to prevent future terrorist attacks.

White House spokesman Jay Carney reiterated Tuesday, "We have very serious concerns about the leak of classified information about programs that are very important to our national security." He declined to comment on the investigation into the leaker, a former government contractor named Edward Snowden.

Some advocates for more transparency, like Rep. Thomas Massie, R-Ky., have been lenient in their initial assessment of Snowden's liability. "I don't think he should be prosecuted, given what I know right now," Massie said to CBSNews.com on Monday.

Others, however, have come down much harder. Sen. Bill Nelson, D-Fla., called Snowden's leaks "an act of treason." House Speaker John Boehner, R-Ohio, called him a "traitor."

"I think anybody that reveals classified information is undermining our intelligence programs," he said. "Now, I can envision moments in our time and history where those programs being abused someone may feel they are being patriotic. I'm not going to comment on this particular instance because it's under investigation and we need to learn more about it."