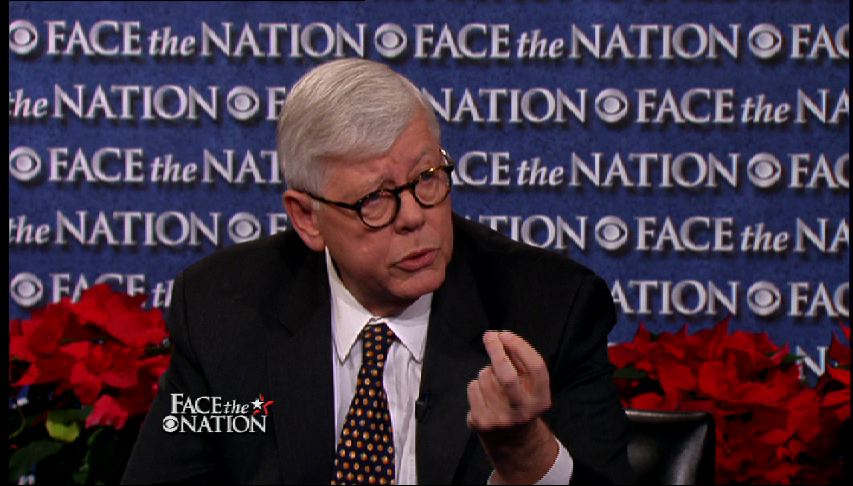 (CBS News) Though alleged shooter Adam Lanza used a Bushmaster AR-15 rifle when he murdered 20 young children and six adults at a Newtown, Conn., elementary school - not five months after the same type of gun was used to kill 12 at an Aurora, Colo., movie theater - the National Rifle Association "will continue to oppose a ban on semiautomatic weapons," the organization's president David Keene said today on "Face the Nation."

Arguing Bob Schieffer's point that if high-capacity weapons were banned or restricted, a baseball bat used instead would produce far fewer casualties, Keene tried to make the case that shooters - not the guns - are the problem. Asked how many rounds an AR-15 - the most popular rifle in the country - or another weapon in the semiautomatic family can discharge in five seconds, Keene said, "Well, they fire when you pull the trigger... they don't keep firing. That's a fully automatic weapon."

One area to review, Keene suggested, echoing what conservatives have emphasized since the Dec. 14 shooting, is "what's wrong with our mental health system?" Lanza was said to have potentially suffered from various mental disabilities, including Asperger syndrome.

The NRA first spoke up about the tragedy Friday, one week after President Obama called for "meaningful action" on gun control in the wake of a climbing statistic on gun-instigated massacres. The group pointed to violent cultural elements like video games as breeding a society more prone to shootings, but argued the Second Amendment shouldn't be called into question.

In response to Schieffer's argument that it's easier for Americans to buy guns than get a driver's license, Keene said there's a difference between the two: "Driving is a privilege, and owning a firearm... is a constitutional right," he said."The fact that something is misused, whether it's a baseball bat, or the mass killing in a Chinese school with an axe and a knife, doesn't mean that you ban baseball bats, axes and knives or guns."

Still, Keene said, the NRA is "perfectly willing" to open up a discussion about the place of high-capacity magazines in U.S. gun culture.

"In the it next few years, there are going to be dozens of lawsuits brought to say what is and what isn't reasonable restrictions," Keene said. "We'll argue those, and we're perfectly willing to. Today, Bob, the question isn't how many bullets are going to fit in a magazine; is the gun somebody has got ugly or not ugly? The question is, can we keep guns out of the hands of people who are potential killers?