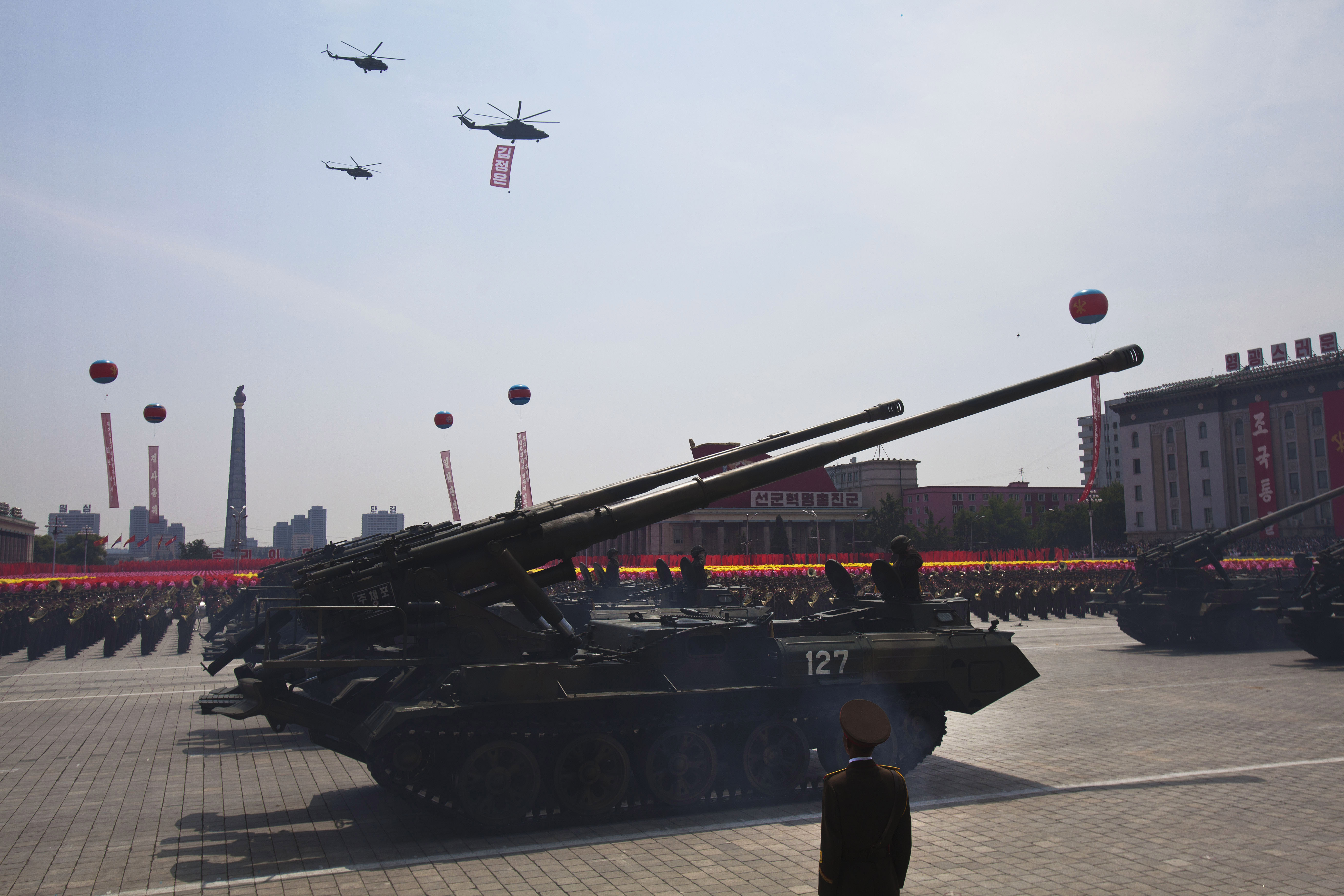 PYONGYANG, North Korea Goose-stepping soldiers, columns of tanks and a broad array of ominous-looking missiles poised on mobile launchers paraded through Pyongyang's main square on Saturday in a painstakingly choreographed military pageant intended to strike fear into North Korea's adversaries and rally its people behind young ruler Kim Jong Un on the 60th anniversary of the armistice that ended the Korean War.

The lavish assembly of weapons and troops is reminiscent of the marches held by the Soviet Union and China at the height of the Cold War. It is one of the few chances the world gets to see North Korea's military up close. Pyongyang frequently uses the occasion to reveal new, though not always operational, hardware. Its arsenal of missiles was front-and-center.

Overlooking a sea of spectators mobilized in Kim Il Sung Square to cheer and wave flags, leader Kim Jong Un saluted his troops and waved from a review stand, flanked by senior military officials, the chests of their olive green and white uniforms laden with medals. As fighter jets screamed overhead, a relaxed looking Kim smiled and talked with China's vice president. China fought with North Korea during the war and is Pyongyang's only major ally and a crucial source of economic aid.

Kim's rule, which began in late 2011 after the death of his father, Kim Jong Il, has been marked by unusually high tensions with Washington and Seoul. He has overseen two long-range rocket launches and a nuclear test that drew widespread condemnation and tightened U.N. sanctions.

North and South Korea have turned to tentative diplomacy in recent weeks, but March and April saw North Korean threats of nuclear war against Washington and Seoul in response to annual South Korean-U.S. military drills and U.N. condemnation of Pyongyang's February nuclear test, the country's third.

Saturday's parade was held to mark a holiday the North Koreans call "Victory Day in the Fatherland Liberation War," although the 1950-53 Korean War that refers to ended in a truce and the Korean Peninsula remains technically at war. To commemorate the anniversary, North Korea over the past week has also staged huge mass rallies in its capital and put on elaborate fireworks shows.

Last year's parade, held to commemorate the April celebrations of the 100th birthday of the late national founder Kim Il Sung, Kim Jong Un's grandfather, created a loud buzz among military watchers when the North rolled out a mysterious long-range missile known abroad as the KN-08. Most outside observers now believe the missiles were mock-ups, but they were carried on mobile launchers that appeared to have been obtained from China, possibly against U.N. arms trade sanctions.

In South Korea, the anniversary was marked with a speech by President Park Geun-hye, an exhibit on the war's history and a planned anti-North Korea rally. A South Korean symphony was to perform later in the day.

Park vowed in prepared remarks not to tolerate provocations from North Korea, but she also said Seoul would work on building trust with the North.

"I urge North Korea to give up the development of nuclear weapons if the country is to start on a path toward true change and progress," Park said.

North Korea is estimated to have a handful of crude nuclear bombs, but many analysts don't think it has yet mastered the technology needed to build warheads small enough to fit on long-range missiles.

The North's parade tradition goes back to the founding of the country in 1948. Few countries — including North Korea's communist models — continue to trot out their military forces in public squares with such pomp and pageantry. But Pyongyang has stuck with them because its leaders believe they are a good way to show the world those things about the military they want to reveal, while at the same time sending a potent message domestically of the power of the ruling elite.

"You want the impression of lots of military hardware, and there are plenty of stories of planes and vehicles circling around so they can pass reviewing stands twice," said David Stone, an expert on the Soviet and Russian militaries, at Kansas State University. "The beauty of a parade is that weapons systems don't actually have to work in order to be impressive — a missile launcher looks good even when the missile won't launch."

That can be risky, however.

Almost as soon as last year's parade was over, military experts around the world said they thought the stars of the show — the long-range KN-08 missiles — were mock-ups of a design that is still being perfected and probably couldn't actually fly, despite North Korea's claims that it has the capability to strike the United States with nuclear-tipped ICBMs.

"They certainly learned that they might lose some reputation by showing imperfect mock-ups," said Marcus Schiller, a private-sector aerospace engineer in Germany who is regarded as one of the world's leading authorities on North Korea's missile capabilities. "Better to show nothing and let the world know by `leaked secret information' how dangerous they are."

Even so, the message the parades send to North Korea's own people — who are not privy to such outside analysis — is just as important.

"A military parade, or the big mass pageants, presents an overwhelming impression of uniformity," said Soviet expert Stone. "Everyone is cheering, and though you may not feel like cheering, and lots of other people may not feel like cheering, you don't want to be the only one not cheering. The message is: `You're the only one who is not contented, and action is pointless since everyone else supports the regime."'

Stone noted that a prominent feature of North Korea's parades is the goose-step, which in the minds of most people around the world is inextricably linked to the Nazis, though it well predates Hitler. Stone said North Korea probably picked it up from the Soviets, who had a great deal to do with the creation of the North Korean armed forces.

"Chinese, old Soviet, and North Korean military parades look very much alike, and for very similar historical and political reasons," he said. "The Soviets put lots of effort into making sure things looked very good, and to avoid embarrassing things like a tank stalling somewhere in sight of the reviewing stand. I'm sure the North Koreans have gone out of their way to keep troops uniform by height, and make sure anyone stunted from malnutrition isn't marching. They don't say anything real about power and uniformity and solidarity, but isn't really the point."