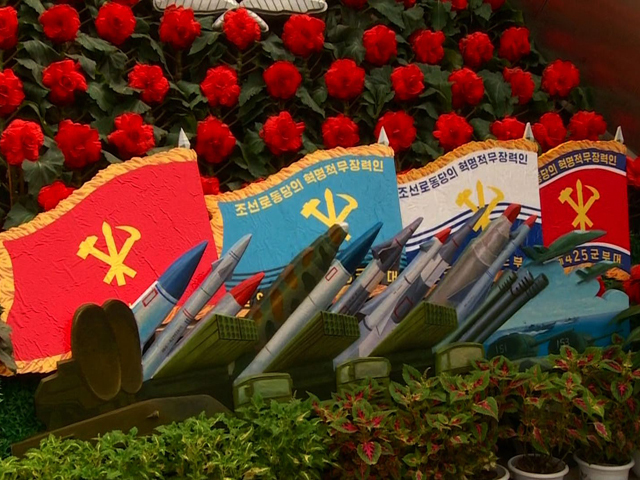 (CBS News) PYONGYANG, North Korea -- This weekend marks 60 years since the armistice that ended the Korean War, and North Korea is marking the date with a massive festival. We were given a rare opportunity to travel to the capital, Pyongyang, and report on what the North Koreans allowed us to see.

Only in North Korea could a flower show get this much international press. But we're guests of the government and it selects what we see.

This Pyongyang flower exhibition was set up to mark 60 years since the end of the Korean War. It made for an odd arrangement of missiles and begonias.

Guide Jong Gyong Hui told us she was asked to assist here. Her usual day job is with the court system.

We mentioned to her that some Americans would think it's odd that in a country that has trouble feeding its own people -- and is at the center of so many international controversies -- that we're being brought to this flower show.

However, she replied, as translated by a minder: "It's a very great pleasure to see you."

It didn't seem like she directly answered our question, so we asked again. "Despite the tense situation," she told us, "our leader, General Kim Jong Un, hosted this exhibit to express the people's desire for peace."

If that message was too subtle, the show at our next stop was not.

In the Arirang Mass Games, tens of thousands of performers acted out the founding story of this nation.

In this Communist country the underlying message in this performance is, of course, the individual gives way for the collective good. But there are still thousands of individual stories that make up this spectacular display.

"It is something that you can't imagine," said Nick Bonner, who runs one of a handful of companies permitted to bring tourists into North Korea. "I think on the day you die, it will be burnt onto your retina; it would be the last memory. It is incredible."

What looks like pixels in a giant billboard -- is actually 20,000 people, each holding up different colored cards to make up different images.

The competition to get into these games is fierce. For many the biggest privilege is to perform for their supreme leader, as they did Friday night.

The celebration may be about country, but it's centered around one man: Kim Jong-Un

So why did the North Koreans invite us to the games? It shows such ability and precision, but much of this is for domestic consumption. People from the countryside are brought into Pyongyang, a place they consider the showcase city, to see the potential of life. But there is a reminder very quickly that it is just a show. When we left, we were in a bus. And looking out, you didn't see people leaving in automobiles. You saw them walking home in the dark.