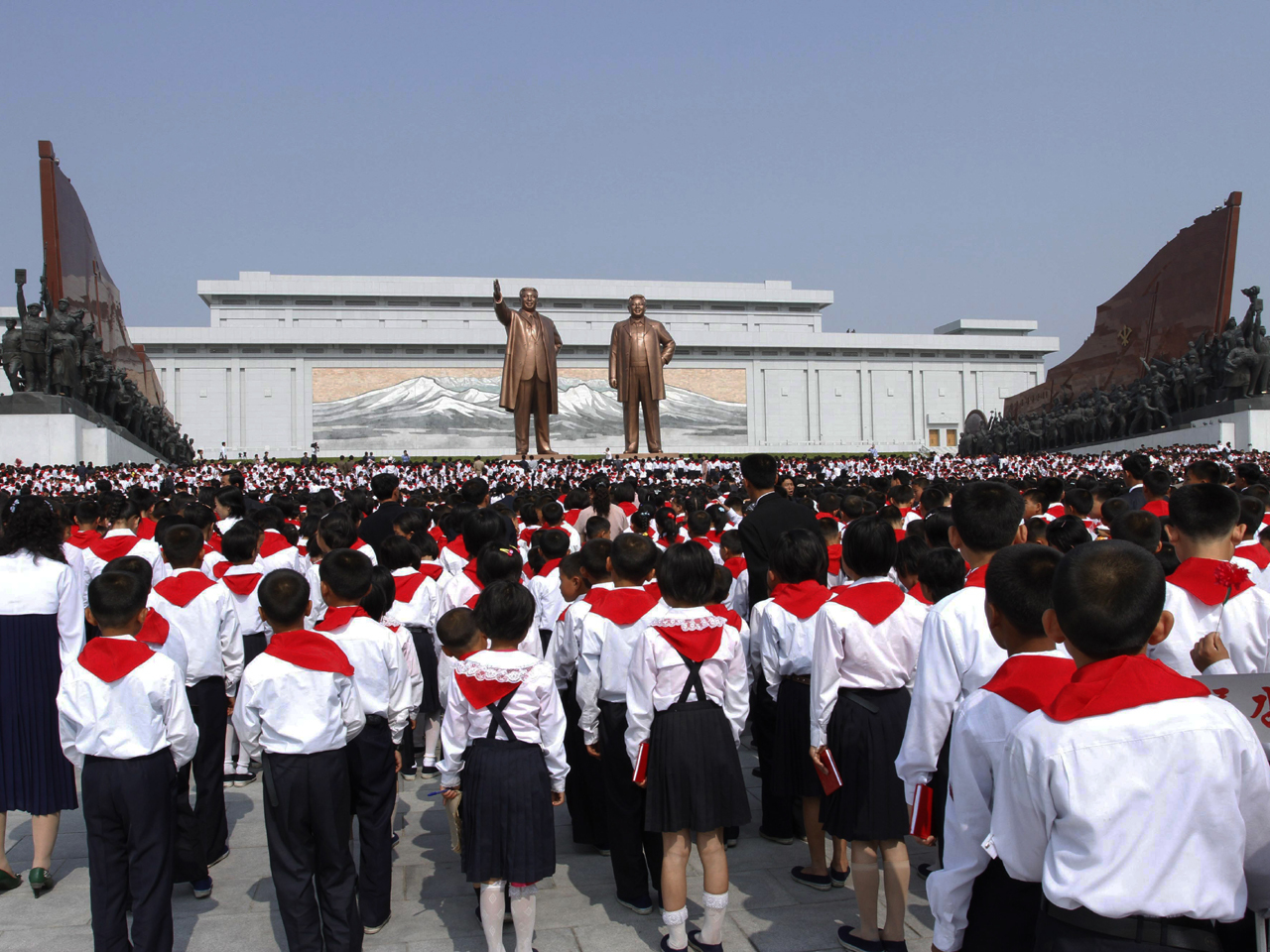 About 20,000 young people gathered at Pyongyang's Kim Il Sung Stadium for a speech that capped an unprecedented six-day children's festival. The celebrations took place two days after North Korea's military threatened to fire at South Korean media companies unless they apologized for criticisms of the festivities, including a Channel A report comparing the event to Hitler Youth rallies during Germany's Nazi era.

North Korean children are taught from an early age to be loyal to the Kim family, with education about the childhoods and accomplishments of founder Kim Il Sung and late leader Kim Jong Il beginning in kindergarten. Seeing and hearing their new leader in person is likely to reinforce a sense of paternal awe among the children, who are raised to refer to the leaders as "father."

Kim walked into the stadium, accompanied by two children, to the cheers of the young delegates to the Korean Children's Union. He was wearing the red scarf of the political organization around his neck as he smiled and laughed with them.

"By mingling with kids, Kim Jong Un is showing that he is a leader who can interact with the public," said Ahn Chan-il, a political scientist who heads the World Institute for North Korea Studies in Seoul, South Korea. "He understands that one of the keys to winning back the respect of the people is by starting with the young generation."

By speaking publicly twice in his six months as leader, Kim already is distinguishing himself from his father. Kim Jong Il, who died in December, addressed the public only once, two years before he succeeded father Kim Il Sung.

Kim told the children, who were dispatched to Pyongyang for the gathering by plane, train and bus from across the nation, that they were the future masters of "a most powerful country where every home will be full of laughter and everybody lives in harmony."

June 6 marks the 66th anniversary of the founding of the Korean Children's Union, which students join at age 7 until they graduate at age 13 to the Kim Il Sung Socialist Youth League.

South Korean media have called the festivities "a political show." Channel A, a television network affiliated with the conservative Dong-a Ilbo newspaper, said the children's festivals in Pyongyang were in the style of the Hitler Youth.

The criticism prompted the North Korean military to warn it would fire at South Korean media outlets if Seoul refused to apologize for orchestrating what North Korea called a "vicious smear campaign."

The North's statement was the latest in a series of threats aimed at South Korea's president and news agencies following the death of Kim Jong Il, which Pyongyang feels was not respectfully acknowledged by Seoul.

Tensions on the Korean Peninsula are high following a North Korean rocket launch in April. Washington and Seoul said the launch was a cover for a test of banned long-range missile technology, and it drew U.N. Security Council condemnation. North Korea said the rocket, which broke apart shortly after liftoff, was meant to put a satellite into orbit.

The Korean Peninsula remains in a state of war because their 1950-53 conflict ended with an armistice, not a peace treaty.