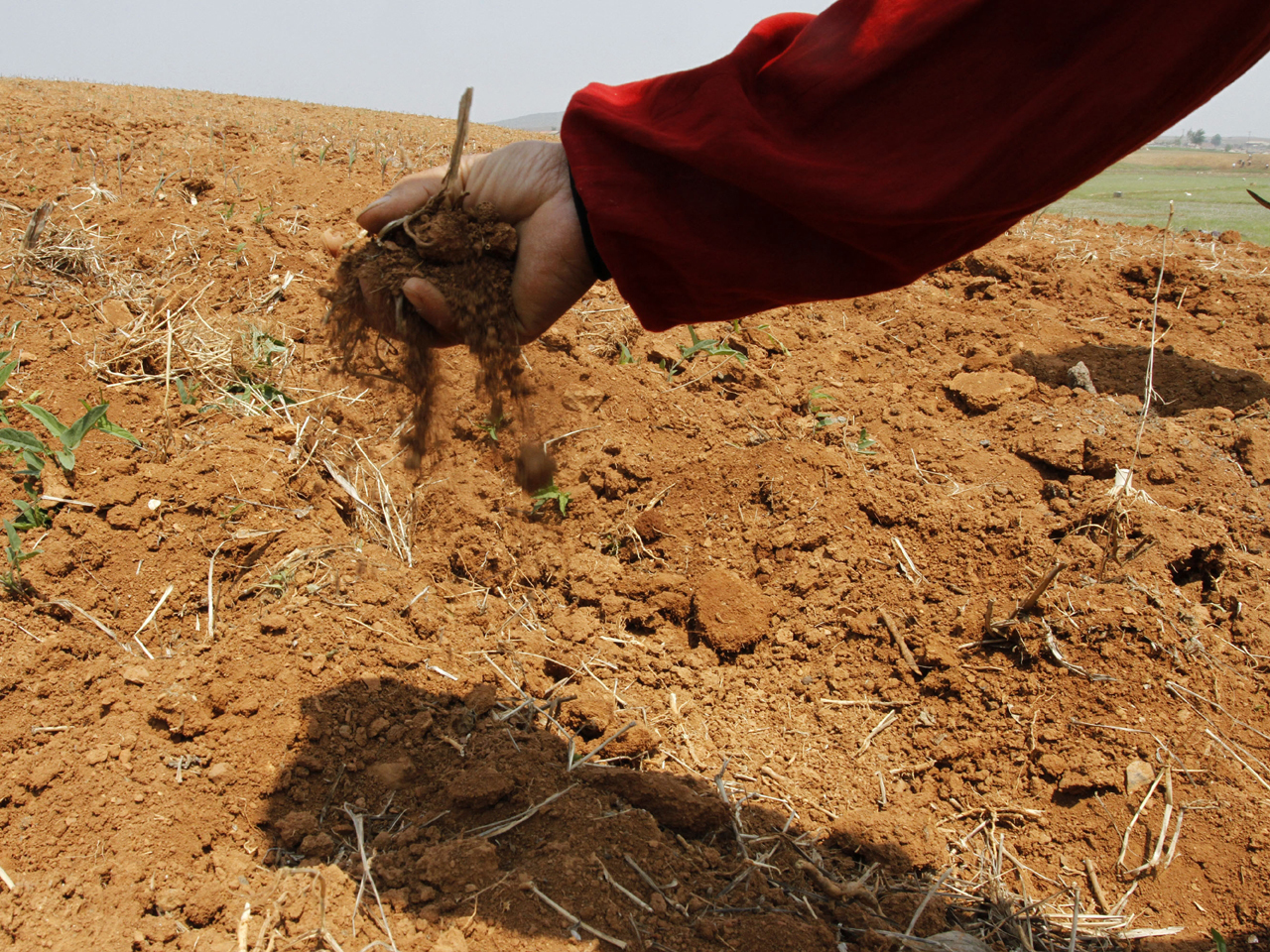 North Korea has had little rain since April 27, with the country's western coastal areas particularly hard hit, according to a government weather agency in Pyongyang. The dry spell threatened to damage crops, officials said, as the country enters a critical planting season and as food supplies from the last harvest dwindle.

In at least one area of South Phyongan Province where journalists from The Associated Press were allowed to visit, the sun-baked fields appeared parched and cracked, and farmers complained of extreme drought conditions. Deeply tanned men, and women in sun bonnets, worked over cabbages and corn seedlings. Farmers cupped individual seedlings as they poured water from blue buckets onto the parched red soil.

"I've been working at the farm for more than 30 years, but I have never experienced this kind of severe drought," An Song Min, a farmer at the Tokhae Cooperative Farm in the Nampho area, told the AP.

It was not clear whether the conditions around Nampho were representative of a wider region. The U.N. Food and Agriculture Organization said it had not yet visited the affected regions to confirm the extent and severity of the reported drought.

North Korea has suffered chronic food shortages for the past two decades because of economic and agricultural mismanagement as well as natural disasters. A famine in the 1990s killed an estimated hundreds of thousands of people.

North Korea state media has publicized the drought but hasn't asked for international handouts. The country's past appeals for food aid have been met with some skepticism, however, amid worries that aid would be diverted to the military and Pyongyang elite without reaching the hungry.

In February, the U.S. reversed course and agreed to provide 240,000 metric tons of food aid in exchange for a freeze in nuclear and missile activities.

However, the deal collapsed after North Korea launched a long-range rocket last month in what it called a failed attempt to send a satellite into space to study the weather.

The launch was widely criticized by the United States and others as a thinly disguised attempt to test missile technology in violation of both the U.S. food deal and U.N. bans on North Korean ballistic tests. The launch drew U.N. Security Council condemnation.

"The United States would like to get to a place where we could once again contemplate providing nutritional assistance to North Korea," Glyn Davies, the top U.S. envoy for North Korea, said last week. "Sadly, that is not the case right now, in the wake of their decision, in March, to announce" the rocket launch.

Pyongyang is heavily reliant on its only major ally, China, for diplomatic protection in the United Nations and for much of its food, trade and oil.

North Korea's dry spell is expected to last until the end of the month, the country's State Hydrometeorological Administration said.

Seedlings are being moved from seed beds to the fields, where they need enough moisture to form strong roots, Percy Misika, the Food and Agriculture Organization's representative for China, North Korea and Mongolia, said Monday from Beijing.

"Any dry spell at this critical time means the seedlings are definitely going to wilt away, and there will be no harvest at the end of the day," he said.

Misika said FAO officials are trying to visit areas suffering from a lack of rain. "If it's going to last for one or two weeks more, it's going to be critical, but if it's a shorter period of time there could be hope," he said.

South Korea's Korea Meteorological Administration said it could not confirm the dry spell without on-the-ground equipment, though satellite photos have shown no big rain clouds over North Korea since late April. North Korean dispatches sent to an international weather center also show the country has had little rain over the past month, spokesman Jang Hyun-sik said in Seoul.