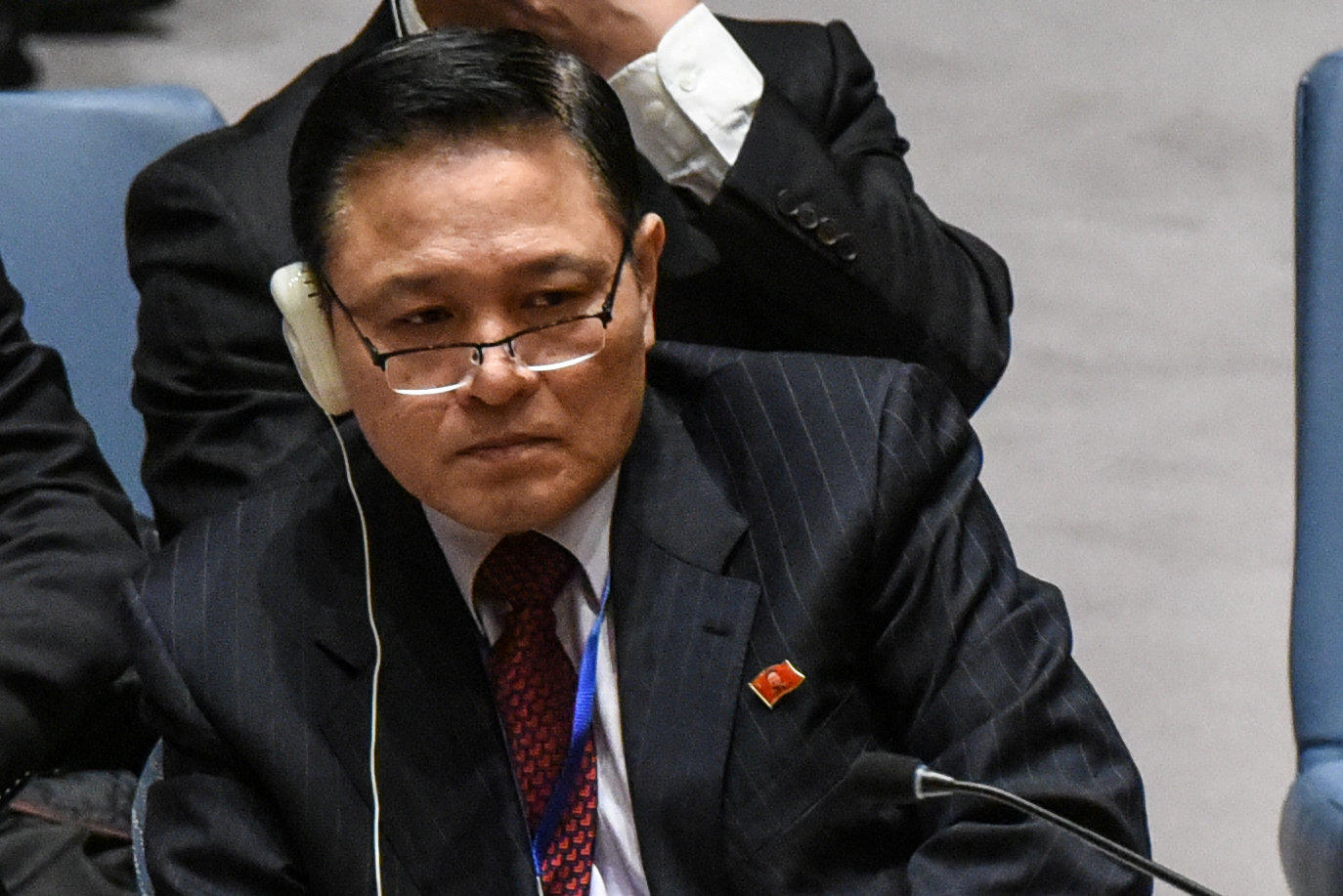 UNITED NATIONS -- North Korea's friends and enemies joined forces Friday in opposing its determination to be recognized as a nuclear weapons state and calling on leader Kim Jong Un to negotiate the denuclearization of the Korean Peninsula - but the North gave no sign of budging on its nuclear ambitions.

In a very rare appearance by a North Korean at the U.N. Security Council, Ambassador Ja Song Nam told a ministerial meeting that the country's possession of nuclear weapons was "an inevitable self-defensive measure" to defend the country against "the U.S. nuclear threat and blackmail."

Ja never mentioned the possibility of talks. Instead, he called the council meeting "a desperate measure plotted by the U.S. being terrified by the incredible might of our republic that has successfully achieved the great historic cause of completing the state nuclear force."

He pointed to the Nov. 29 launch of an intercontinental ballistic missile, which experts say could reach the U.S. mainland.

After his top diplomat's trip to Pyongyang, the Secretary General Antonio Guterres made clear that the U.N. can play a role in talks with North Korea, CBS News' Pamela Falk reports from the U.N.  "Diplomatic engagement is the only pathway to sustainable peace and denuclearization," Guterres said.

The U.N. Security Council's meeting on North Korea achieved no tangible results, but most diplomats underscored the need to increase pressure on North Korea through the enforcement of sanctions, and to denuclearize the Peninsula, and to  explore talks with the government of Kim Jong Un, Falk reports.

Guterres also cautioned on the risks saying he is deeply concerned by the risk of military confrontation, including as a result of unintended escalation or miscalculation.

The Council meeting at the U.N. followed the recent visit by a senior American U.N. diplomat, Jeffrey Feltman, to Pyongyang, returning with a message that talks are vital.

Nam told the Council that Pyongyang's nuclear weapons is  "self-defensive," he said tha, in fact, it is  the U.S.- South Korea joint military exercises threaten  the peace and security of the Korean peninsula.

South Korea's Vice Foreign Minister Cho Hyun told the council that North Korea is "in the final stages of nuclear weaponization" and warned that if it can put a nuclear warhead on an intercontinental ballistic missile "it will fundamentally alter the security landscape in the region and beyond."

He urged the international community to grasp the urgency of the threat this poses and find ways to halt the North's nuclear program - including by maximizing pressure and uniting in answering "absolutely no" to North Korean attempts to be recognized as a nuclear-weapons state.

Earlier this week, Tillerson stunned many by proposing talks with North Korea without preconditions. But he stepped back Friday, after the White House rebutted the proposal, telling the council "North Korea must earn its way back to the table."

The U.S. and close allies South Korea and Japan called for increased pressure on the North to get Kim's government to negotiate the denuclearization of the Korean Peninsula.

North Korea's Ja said his country has been the target of 11 U.N. sanctions resolutions. The United States, the European Union, South Korea, Japan and other countries have imposed additional measures. But all these bans haven't stopped Kim's nuclear and missile tests, or led to negotiations.

Japan's Foreign Minister Taro Kono urged the international community to maximize pressure on North Korea "by all means available," saying there is no other way to get Pyongyang to curb its escalating nuclear and missile programs. He announced that Japan has just ordered the assets of 19 North Korean entities to be frozen.

Kono said last week's visit to Pyongyang by Feltman, the U.N.'s political chief, "only reconfirmed the dire reality" that North Korea "is nowhere near ready" to abandon its nuclear and missile programs, "nor is it interested in returning to a meaningful dialogue."

Feltman said after briefing the council Tuesday that North Korea's foreign minister and others told him "that it was important to prevent war" - and how we do that was the topic of more than 15 hours of discussions. Council diplomats said Feltman told them the North Koreans kept repeating that the time was not right for talks.

In his briefing to Friday's meeting, U.N. Secretary-General Antonio Guterres offered his "good offices" to avoid the dispute over the "alarming and accelerated pace" of North Korea's nuclear and missile program accidentally escalation into conflict.

The U.N. chief warned that "the risk is being multiplied by misplaced over-confidence, dangerous narratives and rhetoric, and the lack of communication channels." He urged an immediate re-establishment and strengthening of government and military communications.

Speaker after speaker at the ministerial meeting expressed concern about possible conflict.

Russia's U.N. Ambassador Vassily Nebenzia said "military rhetoric accompanied by a test of strength by the participants has led to a situation where around the world people have begun to wonder whether there will be war or not."

He questioned the U.S. commitment to peace on the Korean peninsula, saying 2 1/2 months of quiet from North Korea was answered by Washington and its allies with unscheduled and unprecedented military exercises in their scale, unilateral sanctions, and a declaration that the North is a state sponsor of terrorism.

"All of these steps force us to wonder about the sincerity of statements that suggest that there is a preference for a peaceful approach to resolving the crisis" by the United States, Nebenzia said.

"There is no military option, and resort to force can only bring disastrous consequences," he said.

As a close neighbor, Wu said China has made great efforts to promote dialogue and denuclearization.

But he pushed back against U.S. insistence that China holds the key to resolving the crisis.

"The current situation on the (Korean) Peninsula is not caused by any one party alone, and it is not possible to impose on any one party the responsibility of solving the problem," he said.