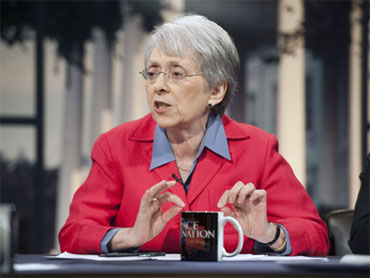 A Bush appointee to the U.S. Commission on Civil Rights denounced allegations by some pundits that the Justice Department is refusing to pursue a voting rights case against members of the New Black Panther Party because of race, and suggested that the charges being made by right-wing figures are politically motivated.

Conservative broadcasters and websites have claimed that the Obama administration is dropping prosecution of New Black Panther activists who were videotaped outside a Philadelphia polling station on Election Day 2008, making intimidating remarks; one man was carrying a nightstick.

Earlier this month former Justice Department lawyer and Republican activist J. Christian Adams testified to the commission that senior officials in the department are not applying voting rights laws in a race-neutral way, by refusing to press charges against African Americans on these issues.

A recent Media Matters investigation has debunked charges that the Obama administration withdrew criminal charges against the Panthers (in fact, the Bush administration decided not to pursue criminal charges, with Assistant Attorney General Thomas Perez testifying that the Bush Justice Department "determined that the facts did not constitute a prosecutable violation of the criminal statutes"; a civil lawsuit was filed in the last days of the Bush administration, and a judgment won by the Obama Justice Department in May 2009).

Media Matters also found no evidence that any voters in the predominantly-black voting district had been prevented from voting.

Appearing on CBS' "Face the Nation" Sunday, the commission's vice chair, Abigail Thernstrom, said, "We have no direct evidence that [the NBP activists] actually intimidated anybody, stopped them from voting."

Thernstrom even characterized the case, in a recent column published by the National Review, as "small potatoes."

Of Adams' charges that DOJ is discriminatory in prosecution, Thernstrom said, "We certainly have no direct evidence that anybody in the Justice Department said 'We're not going to prosecute this case because we have racial double standards: We protect blacks, we don't protect whites.'

"I think the evidence is extremely weak," Thernstrom told anchor Bob Schieffer. "If the Justice Department chooses - and I would be delighted if it did so - to send to us, for instance, somebody who is at that alleged brown bag meeting in which [Deputy Assistant Attorney General] Julie Fernandez said, 'We don't prosecute cases [against] blacks …' fine. I'm an evidence girl, really. I want evidence."

Wall Street Journal columnist John Fund, also appearing on "Face the Nation," argued that not all the facts are known, "because the Justice Department is stonewalling subpoenas issued by the U.S. Commission on Civil Rights.

"Two African-American poll watchers testified they were intimidated," said Fund. "We saw testimony that the voters said they turned around and said they would came back; we don't know if they ever came back."

Fund said there was a pattern of "consistent politicization" in the Justice Department, listing examples of Voting Rights Act decisions in the South.

"North Carolina is predominantly African-American," Fund said, "and voted to have non-partisan elections. The Justice Department said you can't do that. You have to continue to give black voters the cue of Democrat versus Republican so they'll know who to vote for.

"Georgia wanted to take Social Security data and verify the U.S. citizenship of people who were registering to vote; the Justice Department said you couldn't do that.

"I think the Justice Department is clearly stonewalling these subpoenas because they have something to hide. Do I know exactly what they're hiding? I don't."

Washington Post columnist Michael Gerson said this and another racially tinged case, the media flap about Shirley Sherrod and Andrew Breitbart, are indicative of a deeper societal problem:

"I think we're in a moment where you have people on the left and on the right that want to take political polarization and turn it into racial polarization for their own purposes, to get Internet hits or to get supporters or other things," Gerson said. "That's a very, very disturbing trend. So you have it with the New Black Panther case, in my view, where you take an incident and try to turn it into a narrative when it really doesn't justify that."

He called the misuse of racial issues in the media is damaging in a lot of ways: "These wounds are very close to the surface in America. When people take these issues and attempt to use them for political reasons, when they feed rage, they're doing something very, very dangerous. I think, you know, historically it's a real problem."

Thernstrom went further: In a recent interview with Politico, she said that conservative members of the commission had a political aim - to use the New Black Panthers issue to "topple" the Obama administration.

"My fellow conservatives on the commission had this wild notion they could bring [Attorney General] Eric Holder down and really damage the president," Thernstrom told Politico.