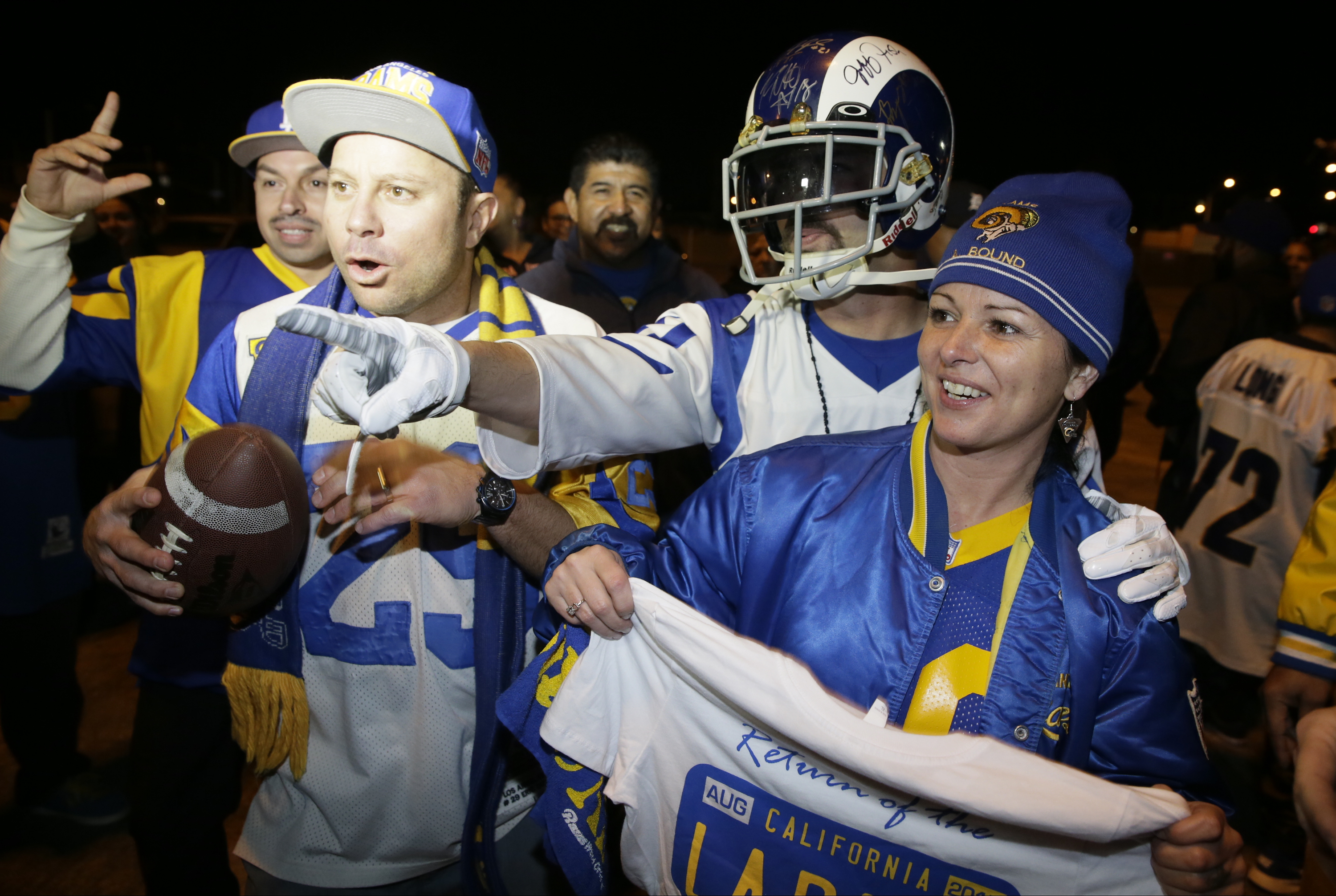 HOUSTON -- The Rams belong to Los Angeles once again.

What about the Raiders? Who knows at this point.

What is certain is that all three franchises face serious challenges over the next few years now that the NFL has approved the relocation of the Rams from St. Louis, and given the Chargers a one-year option to join them in the nation's second-largest media market.

Should the Chargers stay in San Diego, seemingly a long shot, the Raiders could then step in and move from Oakland to L.A.

A long Tuesday of votes and re-votes ended with 30 of 32 NFL owners approving Rams owner Stan Kroenke's ambitious plan to move his team to the site of the old Hollywood Park racetrack in Inglewood, California, about 10 miles from downtown Los Angeles.

Meanwhile, CBSSports.com's Will Brinson writes that "the city of St. Louis is distraught -- fans are understandably quite angry -- and the political leaders around St. Louis are pretty infuriated as well."

St. Louis Mayor Francis Slay said Wednesday that he has "no appetite" for seeking another NFL team, based on what he called the dishonest way St. Louis was dealt with over the stadium issue. Meanwhile Missouri Gov. Jay Nixon called the decision "disappointing" and "a clear deviation from NFL guidelines."

The Raiders and Chargers had a competing proposal to share a new stadium in nearby Carson, but neither option got the 24 votes needed for approval. After another negotiating session in the afternoon, Kroenke's $1.8 billion project prevailed.

The decision ends the NFL's 21-year absence in Los Angeles.

"It is bittersweet," Kroenke said. "We understand the emotions involved of our fans. It is not easy to do these things, they are purposely made hard.

"We made a decision and worked long and hard at the various alternatives. When they didn't succeed, we worked this one to this point."

They need to get busy because the preseason is seven months away, the season about eight months away.

In that time, the Rams must establish their base in Southern California, find a temporary home - the Los Angeles Coliseum is likely until the Inglewood project is finished in 2019 - and keep tabs on the Chargers' decision.

For their first three years back, the Rams will merely be swapping one aging facility for a much older one, with even fewer of the revenue-creating features that fill modern NFL stadiums.

Still, all parties were more concerned with the potential long-range benefits.

"These projects are very large, they're very expensive and involve a lot of people and require a lot of cooperation and a lot of patience," said Houston owner Bob McNair, who beat out Los Angeles in a bid for an expansion franchise that debuted in 2002. "We're quite pleased with the outcome and look forward to the development of a real NFL campus out in Los Angeles."

The NFL also must deal with the prospect of angry fan bases in three markets - and words of warning from top elected officials.

Chargers chairman Dean Spanos declined to say whether his franchise would exercise the Los Angeles option, and San Diego Mayor Kevin Faulconer says the city and county "are not interested in a charade by the Chargers if they continue to pursue Los Angeles."

Faulconer did say that negotiations were likely to continue for replacing aging Qualcomm Stadium. The city's plan would build on the same site.

"This has really been excruciating for everyone," Spanos said. "It's very difficult to say right now I'm going to do this or do that."

St. Louis had a plan for an open-air, $1.1 billion stadium along the Mississippi River north of the Gateway Arch to replace the Edward Jones Dome. But Kroenke mostly ignored the city's overtures.

"It is troubling that the league would allow for the relocation of a team when a home market has worked in good faith and presented a strong and viable proposal," Missouri Gov. Jay Nixon said. "We will review the NFL's decision thoroughly before determining what next steps to take."

Raiders owner Mark Davis was equally noncommittal about Oakland, which has a more troubling situation because the city isn't even close to a proposal for a new stadium.

Officials had to ask the league for more time in a relocation response required by the NFL, and there is still about $100 million in debt from a renovation when the Raiders returned from Los Angeles two decades ago.

"I don't know where we'll be," said Davis, who has made visits to San Antonio as well. "We don't have a lease right now at the Oakland Coliseum. America, the world is a possibility for the Raider Nation."

Ray Perez, a 28-year-old Raiders fan from Sacramento who goes by the moniker Dr. Death, traveled to the Houston meeting in his usual Black Hole garb and was cautiously optimistic after hearing the news.

"I will not be completely, fully thrilled until the ink dries on paper and we know we're staying in Oakland in a new stadium," Perez said. "I'm very happy, very happy. But I'm not going to be overjoyed until we sign a stadium deal to keep the Raiders in Oakland with our own stadium."

While the Raiders called Los Angeles home from 1982-94, the Rams have the longest history in Southern California. The franchise moved there in 1946 after eight seasons in Cleveland, and thousands of fans showed up when St. Louis practiced with Dallas in nearby Oxnard during training camp last August. Many were already anticipating the move.

"It's something that I never thought I'd see again," said Rodney Lusain, 44, of Inglewood. "You know, 21 years is a long time. You lose hope from time to time, but the dream stayed alive. My 'Ram-ily' out here wouldn't let the dream die, and now we're waking up to a new reality. The Rams are coming home!"

The mood was more tempered in Houston, the last city to lose a franchise 18 years ago when the Oilers left for Tennessee.

"The excitement that we feel about being able to return the Rams to Los Angeles is balanced with the disappointment that we weren't able to get it done with our fans in St. Louis, San Diego and Oakland," Commissioner Roger Goodell said at a news conference about 11 hours after the meetings started. "But we'll continue to try in those markets and we'll continue to try to address those issues."