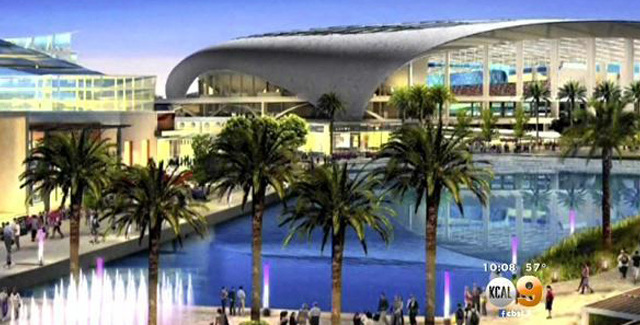 LOS ANGELES -- NFL owners have approved the St. Louis Rams' move back to Los Angeles and have given the San Diego Chargers an option to join the Rams in a proposed stadium in Inglewood, California, CBSSports.com reported.

All three teams applied earlier this month to move to the nation's second-largest media market, which has been without an NFL team since the Raiders and Rams moved out in 1994.

"The NFL ignored the facts, the loyalty of St. Louis fans, who supported the team through far more downs than ups, and the NFL ignored a strong market and viable plan for a new stadium," said St. Louis Mayor Francis Slay in a statement. "I am proud of our effort and what St. Louis was able to accomplish in an extraordinarily short period of time. I thank everyone who worked so diligently on this project, especially the Governor's Task Force."

The mayor said in his statement that in the meantime, focus needs to be increased on the region's hospitality industry-- conventions, tourism and amateur sports.

"St. Louis is great place to live and build a business-- with or without NFL football," he wrote.

For the Chargers, the vote means that the team still has the option to try and work things out with the city of San Diego. The NFL has given the Chargers until January 2017 to negotiate a lease with the Rams in Inglewood. If the Chargers haven't made a relocation decision by Jan. 16, 2017, then the Raiders will have the option to join the Rams in L.A., CBSSports.com reports.

Dean Spanos, Chairman of the San Diego Chargers, released a statement on the matter. He wrote that he will be working over the next several weeks to explore the options to determine the best path forward for the Chargers.

"My goal from the start of this process was to create the options necessary to safeguard the future of the Chargers franchise while respecting the will of my fellow NFL owners," he said. "Today we achieved this goal with the compromise reached by NFL ownership. The Chargers have been approved to relocate to Los Angeles, at the Inglewood location, at any time in the next year. In addition, the NFL has granted an additional $100 million in assistance in the event there is a potential solution that can be placed before voters in San Diego."

CBS Los Angeles previously reported that the Chargers and Raiders proposed a joint $1.7 billion, 72,000-seat stadium in Carson while Rams owner Stan Kroenke backed a $1.86 billion, 80,000-seat plan to be built at the former Hollywood Park Racetrack site in Inglewood.

The vote means that Kroenke can get started almost immediately on his $1.86 billion stadium project in Inglewood, California, CBSSports.com reports.

After the vote was done, NFL commissioner apologized to every city that will be losing a team.

"Stabililty is something that we take a lot of pride in," Roger Goodell said. "It's bittersweet, too, because we were unable to get the facilities that we'd hoped for in their markets. We weren't able to get it done for our fans in St. Louis and San Diego and Oakland."

La Canfora said the relocation vote was a huge victory for Kroenke, who had been doing everything in his power to make sure his team would be able to leave St. Louis after the 2015 season.

"When the Rams turned in their relocation application in early January, they noted that any team trying to survive in St. Louis would suffer 'financial ruin,'" La Canfora reported.

The Oakland Raiders are likely out of the running for a move to Los Angeles, a source told the Associated Press. The option gives the Chargers the choice of staying in San Diego or sharing the Inglewood stadium with the Rams.

The Chargers played at the Coliseum in their inaugural 1960 season before moving to San Diego in 1961.