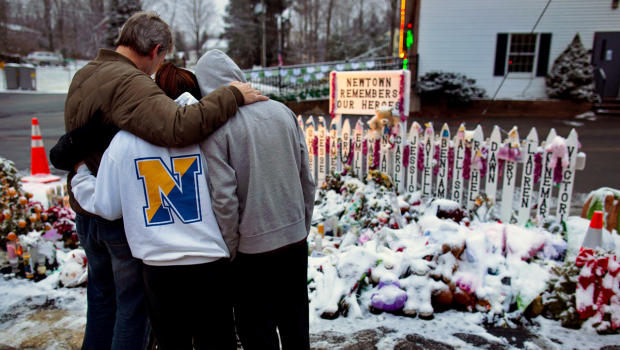 Sarah Walker Caron does not plan to mark the one-year anniversary of the day a gunman came into her son’s elementary school and murdered 26 people.

While groups such as Moms Demand Action for Gun Sense in America held events across the country all week, and President Obama’s Organizing for America encourages Americans to gather in remembrance of the shooting, calling it a “day of action” against gun violence, Caron and her family are looking forward to a “normal, fun, holiday Saturday.” A Saturday where they don’t talk about, as her son calls it, “the bad thing that happened.”

On Dec. 14, 2012, Caron’s then-7-year-old son escaped the massacre inside Sandy Hook Elementary School physically unharmed. After cowering in his classroom while Adam Lanza roamed the halls of the Newtown school, slaughtering 20 first-graders and 6 adults, the little boy and his classmates were evacuated by police. Told, as they ran, to “cover their eyes.”

Exactly six-months later, she took her son and younger daughter out of school for a family day.

“We talked about it openly for a while,” says Caron, a freelance writer. “Then my son said, ‘I don’t want to talk about it anymore. I’ve said what I need to say. Can we put it behind us?’” She wants to honor his wishes.

But not marking the day officially doesn’t mean Caron has stopped thinking about what happened, and what it meant.

“I thought, this is it, we’re going to see a big change. But we didn’t,” she says. “We had an opportunity to decide who we wanted to be as a people, and we just let it fall away.”

Despite the international outpouring of grief and outrage in the days and weeks following the massacre, the Newtown shooting failed to move the needle on America’s gun control laws. A federal bill that would have required background checks for all commercial gun sales– including those at gun shows and between private parties – failed in April. And according to the New York Times, while 1,500 gun-related bills have been proposed in state legislatures in the past year, only 109 passed. Of those, 70 actually loosened restrictions on owning firearms.

And, since Newtown, at least 194 Americans under the age of 12 have been killed by guns, according to an analysis by Mother Jones.

“It seems like, if anything, gun violence and the threat of gun violence is at a high,” says Caron. She mentions that in just the past two weeks there was a gun scare at Yale University, and a gunman arrested near the University of New Haven, less than 30 miles from Newtown.

But Caron says she tries not to dwell too much on what she sees as the lost opportunities in the wake of the shooting. Instead, she focuses on how the event drew her community closer.

“There was such a tremendous response,” she says. “The kindness, the coming together. Socially, there was so much good that came from something so terrible.”

Caron says the family has marked many firsts since the shooting: the first month after, the first day back to school, the first robo-call from the school district.

Saturday, she says, “will be our last first.”