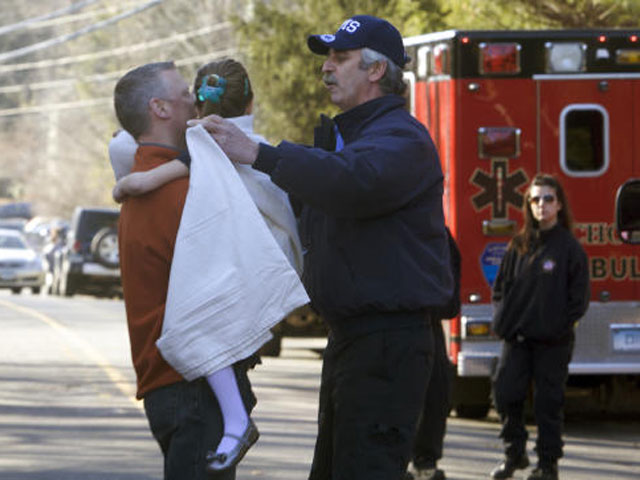 (CBS) - A parent whose two small children both attend the Sandy Hook Elementary School told Crimesider that her second-grade son was told to cover his eyes as he and other students were escorted out of the school after a mass shooting that left at least 26 people dead Friday morning.

"He heard some loud bangs and the teacher told them they had to go into the protective mode for when something bad happens," says Sarah Walker Caron, a freelance writer who lives in Newtown, Conn.

Caron said her son's teacher locked the classroom door with the students inside after the shooting began Friday morning about 9:30.

"A police officer came in to make sure that everything was okay," Caron said her son told her. The children were then taken to a firehouse about a quarter-mile away from the K-4th grade school.

Caron said her daughter is enrolled in kindergarten at the school, but attends class in the afternoon and was not at school at the time. She said she has not heard from her daughter's teacher.

Now safe at home - with the doors locked and her family surrounding her - Caron says, like so many others involved in mass shootings, she never thought something like this would happen in her "small, quiet town."

She also knows that with cousins and neighbors attending the same school, this tragedy is not going to be something she can shield her kids from.

"This is going to be something my son is going to have to process," she says. "You can't go through something like this and not be affected. These are kids he knows. This was his principal."