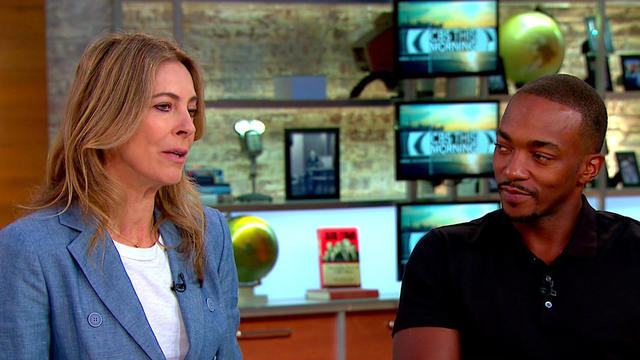 "Detroit" has been described as "tense, excruciating and entirely necessary." The new film by Academy Award-winning director Kathryn Bigelow is set during the civil unrest that erupted 50 years ago following the police raid of an unlicensed bar in a black Detroit neighborhood.

The violence was in response to police brutality and decades of racial inequality. Five days of conflict resulted in more than 40 deaths and more than 2,000 damaged or destroyed buildings.

"Detroit" centers on a real-life incident at the Algiers Motel where police terrorized guests in a confrontation that ended with the deaths of three unarmed black teens at the hands of white police officers.

Bigelow said on "CBS This Morning" Friday that she wanted to tell this story primarily because of its relevance to today.

"When I was first introduced to it, it was right around the time of Ferguson, Missouri, and I'm thinking, this is 50 years ago today and yet it's happening today, it's happening tomorrow. It's recurring far too often and I hope, perhaps, it could invite a dialogue to encourage a bridge between an incredible racial divide in this country," Bigelow said.

"Detroit" is a reunion for Bigelow and actor Anthony Mackie who worked together on the 2006 movie "The Hurt Locker." Mackie, who portrays a real-life survivor of the incident, also joined "CBS This Morning" to discuss the film.

"Being a parent of little boys, you know, you try to do work that they can watch and relate and learn from. And when I read this script and read Greene, and that character specifically I knew Kathryn would give me that opportunity," Mackie said.

Bigelow said a combination of court records, testimonies, Freedom of Information Act requests and research was used to piece together the characters and historical context of the story.

"We also met with real-life people who were involved in this incident," Bigelow said. The person who inspired the character, Julie, joined Bigelow on set every day, the director said. "Hearing their rendition of this situation and the horror that they went through really galvanized my determination to tell the story."

Asked if they thought the Detroit riots could happen today, the two paused and looked at one another before Bigelow said, "It seems all far too likely in many respects."

Rep. John Conyers of Michigan hosted a screening of the film on Capitol Hill and is also portrayed in the film. Conyers is renewing a call to end racial profiling with proposed legislation. "Hopefully this film could encourage that conversation," Bigelow said.

Mackie's character is a military veteran and one of the people trapped in the Algiers Motel. Though the two never met, Mackie said, "I think it says a lot about his character and dignity that he was the first person to speak out about this tragedy."

Mackie added: "We are right now in that decade of turmoil and combustion. I feel like America every 50 years goes through a resurgence – a growth. And from that growth the country transforms dramatically and right now we're in that pressure cooker that all we need to do is add a match and it'll explode."

But for Mackie the most important message of the movie is simply, "survival."

"Detroit" opens in select cities Friday and nationwide on August 4.