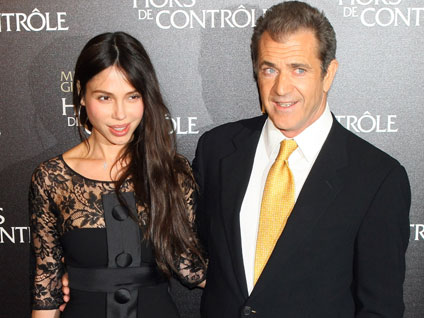 NEW YORK (CBS/AP) Mel Gibson allegedly is heard acknowledging that he hit the mother of his 8-month-old daughter in a recording released by a celebrity news website.

The eight-minute recording posted Monday by RadarOnline.com is purportedly a phone argument between Gibson and then-girlfriend Oksana Grigorieva. A voice sounding distinctly like the Academy Award-winner is heard telling Grigorieva that she "deserved" to be hit after she chastised him for allegedly punching her in the face and breaking two of her teeth.

"Oh, you're all angry now!" Gibson responds. "You know what, you ... (expletive deleted) deserved it!"

At another point, he says, "Threaten ya? I'll put you in a [expletive] rose garden. ... You understand that? Because I'm capable of it."

Alan Nierob, a spokesman for Gibson, declined comment on the tape.

The former couple has been locked in a bitter custody dispute in Los Angeles. The 40-year-old singer has accused Gibson of domestic violence, and sheriff''s officials have launched an investigation.

Gibson alleges that Grigorieva tried to extort money from him and that, if he didn't pay, she'd leak recordings of him to the press.

Los Angeles County Sheriff's Department spokesman Steve Whitmore would not say directly whether the recordings released by RadarOnline would become part of the investigation, but he said any potential evidence would be thoroughly reviewed and considered.

"Everything is part of the investigation," he said. "Anything that is connected to the case, we will investigate."

He said there was no timeframe for the inquiry into Gibson to be concluded. "The larger the volume, the longer it will take," Whitmore said.

After detectives conclude their work, the case will be turned over to the Los Angeles County District Attorney's office, which will decide whether to pursue criminal charges.

Last week, a recording posted by RadarOnline.com included segments it said was Gibson telling Grigorieva that she was dressing too provocatively and that it would be her fault if she were raped.