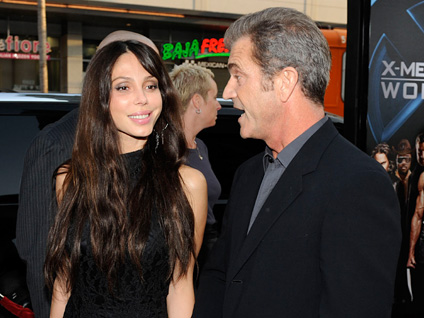 Mel Gibson may be the focus of a domestic abuse claim filed by ex-girlfriend Oksana Grigorieva, but the actor is now alleging that she is the one who broke the law.

A source tells People magazine that Gibson will be presenting evidence to detectives that Grigorieva tried to extort money from him and that, if he didn't pay, she'd leak recordings of him to the press. The report also states that the actor asserts that Grigorieva made false claims to police about his alleged abuse. Asked about a report Friday that Gibson also allegedly threatened Grigorieva with a gun, Los Angeles Sheriff's spokesman Steve Whitmore told the magazine he could neither "confirm or deny" the allegation. The investigation is ongoing and the case reportedly could be handed over to prosecutors later this month.

It was reported on July 1 that the actor was allegedly caught on tape using a string of racist and derogatory remarks in a profanity-laced argument with Grigorieva.

That audio recording was posted on the Internet Friday by RadarOnline.com. The recording includes segments in which a man's voice that sounds distinctively like the Academy Award winner is heard telling Grigorieva that she looks like a "whore." The man then uses the N-word.

The website reported that the recording was made by Grigorieva.

RadarOnline has been posting transcripts of audio it says it obtained of Gibson ranting and threatening Grigorieva, but Friday's post is the first time the actual recording was released. Grigorieva and Gibson are currently in the midst of a custody battle over their 8-month-old daughter, Lucia. In 2006, Gibson unleashed a now-infamous anti-Semitic tirade to police following a drunken driving arrest. He later apologized for his "despicable" comments and "out of control" behavior. Gibson is no longer on probation for that case and his conviction has since been expunged. The actor, 54, has not publicly discussed the breakup with Grigorieva, 40. The former couple first revealed their relationship shortly after Gibson's wife, Robyn, filed for divorce last April.