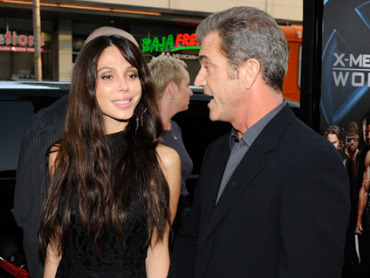 LOS ANGELES (CBS/AP) A celebrity website has posted audio of a recording it says is Mel Gibson engaging in a racist and sexist rant toward his ex-girlfriend.

The recording posted Friday by RadarOnline.com includes segments in which a man's voice that sounds distinctively like the Academy Award winner is heard telling his then-girlfriend, Russian singer Oksana Grigorieva, that she looks like a "whore." The man then uses the N-word. Listen to clips of the recording First Clip Second Clip Third Clip The website reported that the recording was made by Grigorieva. The former couple are engaged in a bitter custody dispute over their 8-month-old daughter, Lucia, and the singer has accused Gibson of physical abuse. Detectives are looking into her claims. Gibson alleges that Grigorieva tried to extort money from him and that, if he didn't pay, she'd leak recordings of him to the press. RadarOnline has been posting transcripts of audio it says it obtained of Gibson ranting and threatening Grigorieva, but Friday's post is the first time the actual recording was released.

America's most popular TV shows of all time, ranked