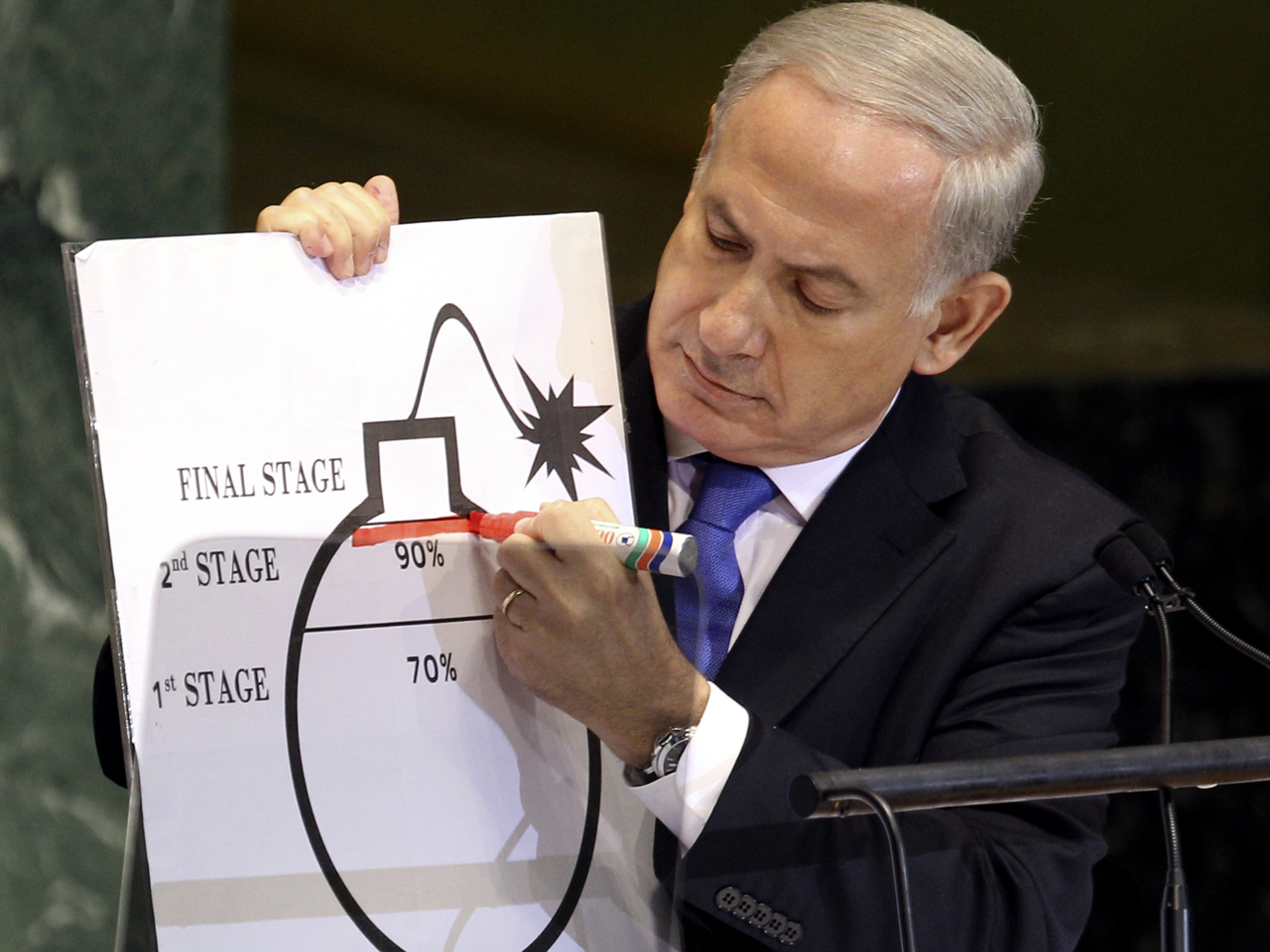 The report exposed a deep rift between Prime Minister Benjamin Netanyahu and his top security officials over the wisdom of attacking Iran but also indicated that Israel was much closer to carrying out a strike at that time than was previously known.

In an interview for the program, Netanyahu also returned to the go-it-alone rhetoric regarding the possibility of a unilateral strike on Iran which he had seemed to abandon since the United Nations General Assembly in September.

Speaking to Channel 2 TV's flagship investigative program "Uvda," or "Fact," Netanyahu did not address the alleged 2010 incident but dismissed any questioning of his resolve.

When asked if he was ready to push the button, he said: "Of course I am, if I have to, I just hope I don't have to."

In stronger language that he typically uses, Netanyahu said Iran was progressing in its quest for a nuclear bomb in order to destroy Israel. He pledged that as long as he is prime minister, he will not allow that to happen.

"We are serious, this is not a show," he said. "If there is no other way to stop Iran, Israel is ready to act."

The ramped up rhetoric from Netanyahu emerged hours before Americans took to the polls to chose a leader for the coming four years, and hours after the head of the United Nations nuclear watchdog agency said Iran was still not cooperating with attempts by the international community to monitor the nuclear work.

"Iran is not providing the necessary cooperation to enable us to provide credible assurance about the absence of undeclared nuclear material and activities," Yukio Amano told the U.N. General Assembly on Monday.

Uvda reported that toward the end of a meeting in 2010 Netanyahu and his defense minister, Ehud Barak, ordered Israel's military chief and director of the Mossad espionage agency to put the country on "P Plus" status — code for pre-attack mode on Iran.

The report said the officials were shocked. Then-military chief Lt. Gen. Gabi Ashkenazi warned that Israel's enemies would notice the measure, which might touch off a war. "This is not something you do if you are not sure you will ultimately want to carry it out," he was quoted by unidentified close associates as saying. "This accordion produces music when you play with it."

Meir Dagan, the Mossad chief at the time, was even blunter, telling the leaders that without seeking formal approval from Netanyahu's Security Cabinet, a decision-making body of government ministers, they were "taking an illegal decision."

"The prime minister and defense minister simply tried to steal a decision to go to war," he was quoted by Uvda as saying. Dagan did not appear on camera, and Uvda attributed his remarks to his "associates."

In a rare interview earlier this year with "60 Minutes" correspondent Lesley Stahl, Dagan spoke out against a preemptive strike against Iranian nuclear facilities, at least anytime soon.

Dagan, who has spoken vehemently against Israel's current leaders -- even dubbing them warmongers -- said he believed the Iranian regime was a rational one and even its president, Mahmoud Ahmadinejad, who has called for Israel to be annihilated, acts in a somewhat rational way when it comes to Iran's nuclear ambitions.

Israel considers a nuclear-armed Iran to be an existential threat, citing Iranian denials of the Holocaust, its calls for Israel's destruction, its development of missiles capable of striking the Jewish state and its support for hostile Arab militant groups. Tehran says its nuclear program is peaceful and designed to produce energy and medical isotopes, a claim that Israel and many Western countries reject.

Dagan, who stepped down as Mossad chief in 2010, is believed to be the mastermind of Israeli efforts to sabotage the Iranian project. The Mossad is suspected of infiltrating deep into Iran, spreading viruses and assassinating nuclear scientists.

Netanyahu has repeatedly said the threat of force must be seriously considered should economic sanctions fail. He recently warned that the world has until next summer at the latest to keep Iran from building a bomb. But analysts have debated whether the Israeli leader would really be willing to order the strike.

Monday's report provided the strongest evidence to date that Netanyahu is prepared to attack, a move that could have dire, far-reaching consequences for the region.

The program aired almost two months after Netanyahu laid out before the U.N. General Assembly his most detailed plea for global action against Iran.

In his speech, the Israeli leader demonstratively flashed a diagram of a cartoon-like bomb showing the progress Iran has made, pulled out a red marker and drew a line across what he said was a threshold Iran was approaching and which Israel could not tolerate — 90 percent of the way to the uranium enrichment needed to make an atomic bomb.

Israel has systematically built up its military specifically for a possible strike on Iranian nuclear facilities. It has sent its air force on long-distance training missions, procured American-made "bunker-busting" bombs and bolstered its missile defenses.

Still, an attack on Iran would not be easy. Probable targets, including the Natanz and Fordo enrichment facilities south of Tehran, lie some 1,000 miles from Israel.

Experts believe some of the Israeli warplanes could not make the round trip without refueling in flight. Israel, which has eight tanker planes, can refuel an airplane in flight in a matter of minutes, though it's unclear where the task would take place since much of the airspace in the region is hostile. They would also have to contend with Iranian air defense systems.

A pre-emptive Israeli strike would almost certainly draw a fierce Iranian retaliation toward Israeli population centers. Iranian leaders have even suggested they may strike Israel if they felt threatened by the possibility of an Israeli strike.

Iranian officials did not immediately comment on the Israeli report. But in a newspaper interview on Sunday, Iran's foreign minister, Ali Akbar Salehi, dismissed Israel's capabilities.

"Let them try it if they can — if Israel was ready to strike Iran it would have happened by now," he told the Qatari newspaper Al-Waten on Sunday. "We may suffer from this attack, but the Israelis are afraid of the results of such an attack. We won't sit idly by if it happens."

The revelations come ahead of a charged Israeli election season and highlight a broad range of rifts among Israeli leaders and officials.

At the meeting in 2010, Barak said Ashkenazi told him the military wasn't able to carry out the attack. "Ultimately, at the moment of truth, the answer given was that the ability didn't exist," Barak told Uvda.

But Ashkenazi denies that. He was quoted by the close associates as saying he instead told Barak that the military had prepared a viable option and was ready to carry it out but that such a mission would be a strategic mistake.

Barak countered that offering such an assessment was not Ashkenazi's job.

"A chief of staff needs to build the operational capacity. He should tell us professionally if we can operate or not and he can and should give his recommendation, but an operation can go through even if he opposes it," Barak said.

Barak said the alert was part of Israeli preparations and that a final decision to attack was never made.

It was unclear to what extent the opposition of the security officials contributed to the decision to hold back. The positions of their successors are less clear, though they too are believed to be wary of a military option. Nevertheless, Israeli security officials say that over the past two years the Israeli military's capabilities have improved to overcome some obstacles that were previously in place.

Netanyahu told the program that that the ultimate responsibility for protecting Israel was on his shoulders.

"Any prime minister of Israel who cannot act on things that are cardinal to the existence of the state, to ensuring its future and safety and is dependent on the agreement of others, is not worthy of leading," he said, adding that before Israel was a state it had to beg for help from others when threatened with destruction.

"Well today we do not beg, we prepare," he said.