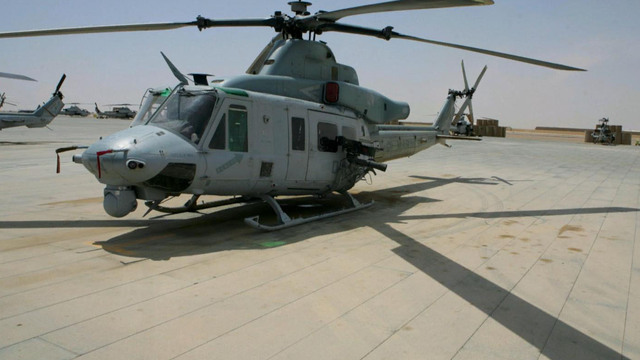 KATHMANDU, Nepal -- Nepalese rescuers on Friday found three bodies near the wreckage of a U.S. Marine helicopter that disappeared earlier this week during a relief mission in the earthquake-hit Himalayan nation, and officials said it was unlikely there were any survivors from the crash.

"The wreckage of the helicopter was found in pieces, and there are no chances of any survivors," Nepal's defense secretary, Iswori Poudyal said. He did not give the nationalities of the three victims, only saying their remains were charred.

A separate team sent by the U.S. Marines said they identified the wreckage as the missing helicopter, the UH-1 "Huey."

Lt. Gen. John Wissler, commander of the Marine-led joint task force, told reporters in Kathmandu that his team could not immediately identify the cause of the crash or identify the bodies found.

"It was very severe crash, and based on what we saw in the condition of the aircraft, we believe there were no survivors," he said.

He said extreme weather and difficult terrain hampered his team's efforts to work at the crash site.

"Due to the extremely difficult terrain of the site of the mishap, below-freezing temperatures and violent winds and thunderstorms, I made the decision to cease the recovery efforts for this evening," he said. "We cannot afford to put U.S. or Nepalese service members at any further risk."

The personnel sent to the site consisted of a special-ops parachute team and a combat rescue officer, reports CBS News correspondent Seth Doane.

The recovery mission will resume at first light Saturday.

Speaking in Washington, President Barack Obama expressed condolences to the families of all the victims and said the Marines "represent a truth that guides our work around the world: When our friends are in need, America helps."

The wreckage was found about 15 miles from the town of Charikot, near where the aircraft went missing on Tuesday while delivering humanitarian aid to villages hit by two deadly earthquakes, according to the U.S. military joint task force in Okinawa, Japan.

The area is near Gothali village in the district of Dolakha, about 50 miles northeast of Nepal's capital, Kathmandu.

The discovery of the wreckage, first spotted by a Nepalese army helicopter Friday, followed days of intense search involving U.S. and Nepalese aircraft and even U.S. satellites.

The U.S. relief mission was deployed soon after a magnitude-7.8 quake hit April 25, killing more than 8,200 people. It was followed by another magnitude-7.3 quake on Tuesday that killed 117 people and injured 2,800.

The helicopter had been delivering rice and tarps in Charikot, the area worst hit by Tuesday's quake. It had dropped off supplies in one location and was en route to a second site when contact was lost.

The father of the 31-year-old pilot, Capt. Chris Norgren, said Marine officials have notified the family that the wreckage was found but haven't confirmed the identities of any bodies.

U.S. military officials said earlier this week that an Indian helicopter in the air nearby had heard radio chatter from the Huey aircraft about a possible fuel problem.

The Huey helicopter that crashed was from Marine Light Attack Helicopter squadron 469 based at Camp Pendleton, California.